Phylogenetic Analysis of MERS-CoV in a Camel Abattoir, Saudi Arabia, 2016–2018

Middle East respiratory syndrome (MERS) coronavirus (MERS-CoV) is a zoonotic disease of concern for global public health (1,2). Dromedary camels are the source of zoonotic infection (3). During 2016–2018, a total of 80 full-length MERS-CoV genome sequences were available from human infections in the Arabian Peninsula where all zoonotic disease has occurred, but only 30 sequences from dromedary camels were available, highlighting the need for contemporary dromedary MERS-CoV sequence data.

During November 2015–June 2018, nasal and rectal swab specimens were collected, typically on a monthly basis, from dromedary camels slaughtered at an abattoir and camel market complex in Al Hasa, Eastern Province, Saudi Arabia (Appendix). Most camels for slaughter were bred locally, but some camels were imported from Somalia or Sudan for slaughter. Imported camels came through the port of Jeddah, usually via a large central camel market in Riyadh.

Nasal and rectal swab specimens were collected from 1,131 camels; 4–143 camels were sampled each month. Overall, 288 (25.5%) nasal and 85 (7.5%) rectal swabs were MERS-CoV–positive as confirmed by reverse transcription PCR (RT-PCR; Appendix); cycle threshold values ranged from 15.3 to 39.1 (median 33.6). Most (68/85; 80%) positive rectal swab specimens were collected from animals that also had a positive nasal swab. Overall, 305 (27%) camels sampled were MERS-CoV–positive from either nasal or rectal swabs. Despite regular exposure to infected camels, none of the abattoir workers had diagnosed clinical MERS disease. 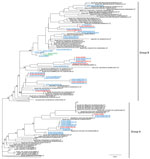 We obtained 48 full genomes of MERS-CoV from the camel samples; dates of sampling were available for 35 (GenBank accession nos. MN654970–5017). We did not detect evidence of deletions in accessory or other genes. Our newly generated virus genomes phylogenetically clustered within the recombinant lineage 5 clade, a novel recombinant clade that has become progressively dominant in Saudi Arabia since 2014 (4,5) (Appendix Figure). The 48 sequences in this study appear to cluster into 2 groups, which we named group A and group B for ease of description rather than a formal taxonomic designation (Figure). Other sublineages within lineage 5 appear to have gone extinct with no human or animal viruses detected since 2016. Virus group A had viruses sampled from 2014–2017, whereas group B had viruses sampled in 2014–2018. Both virus groups cocirculated in the region during the study period (Figure).

Genetically identical viruses were collected mostly during the same sampling period, suggesting cross-infection in the market. However, identical viruses sometimes were from samples collected 1 month apart, such as SA2557 and SA2626, or 3 months apart, such as SA2199, SA2159, and SA2247, suggesting reintroduction of viruses from the same herd or area into the abattoir at different times. Although we sampled imported camels from Somalia and Sudan, the viruses we detected were clade B lineage 5 viruses rather than the clade C viruses that are known to be enzootic in Africa (6). In several instances, viruses from camels from Sudan (for example, SA4104/2017 in December 2017 or SA2687/2017 in May 2017) were almost identical to viruses concurrently detected in camels from Saudi Arabia, indicating likely cross-infection in the camel market. Virus cross-infection and amplification in the camel market could explain the high overall MERS-CoV–positive rate in the abattoir.

A virus from a patient from Saudi Arabia who had diagnosed MERS in the United Kingdom in August 2018 (MERS-CoV_England-KSA_1/2018-08-22) was found to be closely genetically related (99.81% similarity) to a camel virus sampled during this study in 2018 (Figure). As previously reported, viruses from camels and humans interleave within the phylogenetic tree (7), suggesting that viruses in camels continue to be the source of human infections through separate zoonotic transmission events without sublineage separation between viruses in camels and humans.

In conclusion, our study suggests multiple lineage 5 clade B viruses continue to be dominant among camels in eastern Saudi Arabia. Camels imported from Sudan and Somalia also had evidence of MERS-CoV B lineage 5 clade viruses prevalent in the Arabian Peninsula, rather than clade C viruses known to be enzootic in camels in Africa. These data suggest imported camels likely acquired MERS-CoV after arriving in Saudi Arabia and that lineage 5 viruses have the greater evolutionary fitness and appear to outcompete other viral lineages, which is concordant with other recently reported data (8). The high rates of MERS-CoV we detected and viral phylogeny suggest likely cross-transmission of MERS-CoV within the camel market and abattoir complex, even among imported animals.

Dr. Hemida is an assistant professor of molecular virology in the Department of Microbiology, College of Veterinary Medicine, King Faisal University, Saudi Arabia. His primary research interests are virus–host interactions and the molecular biology of coronaviruses.

King Abdul-Aziz City for Science and Technology provided funding through the MERS-CoV research grant program (grant no. 20-0004), which is a part of the KACST Targeted Research Program.

Page created: October 14, 2020
Page updated: November 19, 2020
Page reviewed: November 19, 2020
The conclusions, findings, and opinions expressed by authors contributing to this journal do not necessarily reflect the official position of the U.S. Department of Health and Human Services, the Public Health Service, the Centers for Disease Control and Prevention, or the authors' affiliated institutions. Use of trade names is for identification only and does not imply endorsement by any of the groups named above.

Phylogenetic Analysis of MERS-CoV in a Camel Abattoir, Saudi Arabia, 2016–2018