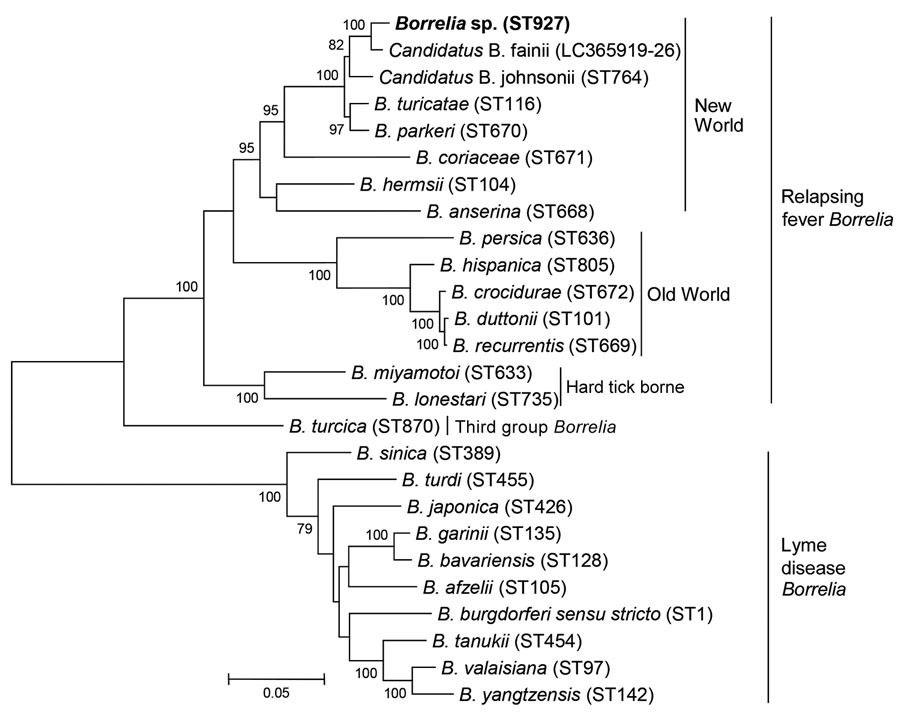 Figure. Phylogenetic analysis of Borrelia species based on 8 concatenated housekeeping genes (clpA-clpX-nifS-pepX-pyrG-recG-rplB-uvrA). Bold indicates Borrelia species identified in study of pathogenic New World relapsing fever Borrelia in a Myotis bat, eastern China, 2015. The tree was constructed by using the maximum-likelihood method in MEGA7 (https://www.megasoftware.net). Bootstrap values were calculated with 1,000 replicates. There were a total of 4,776 positions in the final dataset. Reference sequences of Borrelia species were downloaded from the Borrelia MLST database; the corresponding sequence type (ST) number of each Borrelia species is shown in parentheses. For Candidatus Borrelia fainii, the GenBank accession number is shown instead of an ST number because the 8 housekeeping gene sequences of Candidatus Borrelia fainii were only submitted to GenBank and no ST number was assigned. Scale bar indicates 5% divergence.

Page created: June 23, 2020
Page updated: November 19, 2020
Page reviewed: November 19, 2020
The conclusions, findings, and opinions expressed by authors contributing to this journal do not necessarily reflect the official position of the U.S. Department of Health and Human Services, the Public Health Service, the Centers for Disease Control and Prevention, or the authors' affiliated institutions. Use of trade names is for identification only and does not imply endorsement by any of the groups named above.