Lymphocytic choriomeningitis virus (LCMV) is a rodentborne pathogen that belongs to the genus Mammarenavirus, family Arenaviridae. The house mouse (Mus musculus) is considered the reservoir of LCMV (1). Humans can be infected with LCMV by inhaling particles contaminated with rodent excreta, during organ transplantation, or congenitally during pregnancy (2). The symptoms of LCMV infection range from subclinical to severe (3); severe infections may manifest as meningitis or encephalitis or as a congenital syndrome including microcephaly, for example (4).

Because of the cosmopolitan distribution of its reservoir host, LCMV most likely circulates globally. However, most epidemiologic studies on LCMV have been conducted in Europe, the United States, Japan, and China (5–10). The presence and seroprevalence of LCMV infections in the Middle East region have remained unknown (11,12). We report on LCMV seroprevalence, acute LCMV infections, and characterization of phylogenetically distinct local LCMV strains in southern Iraq.

Figure 1. Study site (red) in Dhi Qar Governorate, Nasiriyah region, Iraq, from where serum and cerebrospinal fluid samples were collected from persons in rural and urban areas and screened for lymphocytic...

We studied the occurrence of LCMV infection in the Nasiriyah region of southern Iraq by screening 171 serum and 41 CSF samples, from patients with fever and neurologic manifestations, for LCMV RNA and IgM and IgG. The inclusion criteria for the study were acute febrile illness and neurologic symptoms such as headache, muscle weakness, or fatigue (Table 1). The mean duration of illness was 4.29 days (range 3–7 days). We used the IgG positivity in serum samples from the symptomatic patients as well as healthy controls to estimate the LCMV seroprevalence in the region. Ethics permissions were obtained and stored in the Al Hussain General Teaching Hospital and Bint Al Huda Maternity and Children Teaching Hospital in the Nasiriyah region, southern Iraq.

We extracted viral RNA from acute infection samples (serum and CSF) (140 μL/sample) using a QIAamp Viral RNA Mini kit (QIAGEN, https://www.qiagen.com) according to the manufacturer’s instructions. We performed a pan-arena reverse transcription PCR (RT-PCR) using SuperScript II One-Step RT-PCR system with Platinum Taq High Fidelity (Invitrogen, https://www.thermofisher.com), and primers described previously (13). RT-PCR products (≈300–400 bp) were sequenced using the Sanger method; sequencing was performed by the Sequencing laboratory of Institute for Molecular Medicine Finland FIMM Technology Centre, University of Helsinki. For antibody detection, indirect LCMV IgM and IgG immunofluorescence assays (IFAs) were conducted, as described previously (6). In general, IFAs are not very specific assays; therefore, one could assume cross-reaction between LCMV and other mammarenaviruses. The specificity and sensitivity of IFA were not examined in this study. 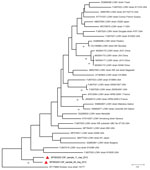 Two CSF samples (from a 35-year-old woman and a 50-year-old man) derived from patients with fever and neurologic symptoms (Table 2) were positive for LCMV RNA by using panarenavirus RT-PCR and sequencing. Phylogenetic analysis showed that both of the sequences (GenBank accession nos. MT093202 for CSF_sample_11_Iraq_2012 and MT093203 for CSF_sample_64_Iraq_2012) grouped with other LCMV strains but formed a distinct subcluster (Figure 2). No corresponding serum samples were available for these patients, but CSF samples were further tested for LCMV IgM and IgG; all were negative.

The overall LCMV IgG seroprevalence was 8.8% (23/261) in all serum samples. The seroprevalence of LCMV in our study was 12.2% (11/90) in the healthy control group and 7% (12/171) in the acute febrile patients. This difference was not statistically significant (p = 0.2 by χ2 test). Because the patient samples were collected early after onset of illness (3–7 days), IgG had not yet developed; IgG serostatus thus reflects past immunity in this patient group. The healthy control population (mean age 42.9 years) was younger than acute febrile patients (mean age 46.3 years). Healthy men (7.9%) were more often LCMV seropositive than were women (5.6%), but in patients with acute febrile illness, the gender ratio was reversed (3.9% in women, 2.8% in men).The detected LCMV IgG–positive samples were derived from all age groups (21–80 years of age) included in this study. The differences concerning residency, age, and gender were not statistically significant. IgG titers measured among positive samples ranged from 20 to 80 in IFA.

Only limited information is available on LCMV infections beyond the United States, Europe, Japan, and China. In this work, we focused on both acute febrile infections (presence of IgM antibodies in serum or LCMV RNA in CSF) and seroprevalence of LCMV in southern Iraq. Considerable LCMV seroprevalence was detected in the Nasiriyah region of southern Iraq, and acute LCMV infection was confirmed by demonstration of LCMV RNA in 2 CSF samples and IgM antibodies in 2 serum samples. The phylogenetic analyses of these 2 findings revealed that the new sequences formed a unique subcluster, ancestral to previously known LCMV strains.

Overall, the seroprevalence rate (8.8%) of LCMV infection characterized in this study is in line with seroprevalences detected earlier in many countries in Europe, in which it varies from 5.0% in Finland (14) to 36% in a special subset in a rural area of the northern Croatian island of Vir (15). Collectively, the seroprevalence and detection of acute infection, including 2 phylogenetically distinct sequences, provide evidence that LCMV circulates in southern Iraq, and it is causing infections leading to acute neurologic manifestations in the population. More sequence data are needed to extend the knowledge on the molecular epidemiology and evolution of LCMV. In addition, further research to characterize LCMV in rodent reservoirs in southern Iraq is needed to plan vector control and public health recommendations.

We gratefully thank Ruut Uusitalo for her assistance in creating the map of Iraq.

This study was partially funded by a research grant to O.V. from the Sigrid Jusélius Foundation and from Helsinki University Hospital Funds.

Page created: July 31, 2020
Page updated: November 19, 2020
Page reviewed: November 19, 2020
The conclusions, findings, and opinions expressed by authors contributing to this journal do not necessarily reflect the official position of the U.S. Department of Health and Human Services, the Public Health Service, the Centers for Disease Control and Prevention, or the authors' affiliated institutions. Use of trade names is for identification only and does not imply endorsement by any of the groups named above.