Coronavirus disease (COVID-19) is a global pandemic, affecting 213 countries with >2.7 million confirmed cases and 190,000 fatalities as of April 25, 2020 (1). Its causative agent was identified as severe acute respiratory syndrome coronavirus (SARS-CoV) 2 (SARS-CoV-2), which belongs to the same coronavirus species as SARS-CoV and SARS-related CoVs (SARSr-CoVs) in horseshoe bats (genus Rhinolophus) (2,3). Given the history among some early case-patients of visiting the Huanan seafood market in Wuhan, China, and its genetic close relatedness to SARSr-CoVs in bats and pangolins (2,4), SARS-CoV-2 was suspected to have emerged from wild animals, particularly bats, similar to SARS-CoV. SARS-CoV was a recombinant virus that originated from Chinese horseshoe bats (Rhinolophus sinicus) before it infected palm civets and then humans (5).

Studying cellular tropism may provide clues to the host range and possible origin of zoonotic viruses. For example, SARS-CoV could replicate efficiently in kidney cells of its primary origin, R. sinicus, but not in other tested bat cells (6). To elucidate the possible origin of SARS-CoV-2, we tested susceptibilities of bat cell lines developed from different species commonly found in southern China to infection by SARS-CoV-2 in comparison with SARS-CoV. The selected bat species harbored a diverse set of coronaviruses, including SARSr-CoVs and Middle East respiratory syndrome–related coronaviruses (MERSr-CoVs), which pose potential health threats to humans (7). We also performed structural modeling of the virus/host receptor-binding interface. 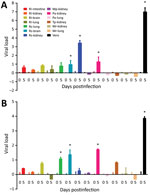 Figure 1. Susceptibilities of 13 bat cell lines to infection by SARS-CoV (A) and SARS-CoV-2 (B) shown from harvest of supernatants and cell lysates at day 0 and 5 postinfection. Viral titers...

To elucidate whether the receptor-binding interface is a contributing factor for cellular tropism, we modeled the structure of the SARS-CoV-2 receptor binding domain (RBD) with that of human angiotensin-converting enzyme 2 (hACE2), R. sinicus angiotensin-converting enzyme 2 (Rs-ACE2), and P. abramus angiotensin-converting enzyme 2 (Pa-ACE2) using homology modeling by SWISS-MODEL (https://swissmodel.expasy.org) as described previously (11), based on the crystal structure of SARS-CoV-RBD/hACE2. The sequence identity between SARS-CoV RBD (template) and SARS-CoV-2 RBD (template) was >50% and the interface for all RBD/ACE2 was similar (Figure 2). We identified 11 aa differences between SARS-CoV RBD and SARS-CoV-2 RBD sequences that involved 4 of 5 critical residues for hACE2 binding in SARS-CoV RBD. Y442 was one of the 5 critical residues in SARS-CoV RBD. Because F456 is more hydrophobic than Y442 in SARS-CoV-2 RBD, it may disturb the electrostatic interaction with hACE2/Rs-ACE2. The interface for RBD/Pa-ACE 2 was similar to that of RBD/hACE2 (Figure 2), implying that Pa-ACE2 may also serve as the host receptor for SARS-CoV and SARS-CoV-2.

The ability of SARS-CoV but not SARS-CoV-2 to replicate in R. sinicus kidney cells, consistent with previous findings (12), may suggest a different evolutionary origin and path of SARS-CoV-2. SARS-CoV was most closely related to SARSr-Rs-BatCoVs from Yunnan, China, suggesting R. sinicus as its primary origin. It could also use Rs-ACE2 as receptor for cell entry (13), which may explain the efficient replication of SARS-CoV in R. sinicus kidney cells. Although SARS-CoV-2 is closely related to SARSr-CoVs in bats and pangolins, none of the existing animal viruses represents the immediate ancestor of SARS-CoV-2. SARS-CoV-2 was most closely related to SARSr-Ra-BatCoV-RaTG13 (96.1% genome identity) in Rhinolophus affinis from Pu’er, Yunnan (2), except that its RBD region was closest to pangolin-SARSr-CoV-MP789 (86.9% nucleotide identity) in smuggled pangolins from Guangdong, suggesting that SARS-CoV-2 may have evolved through recombination (3). The inability of SARS-CoV-2 to efficiently infect and replicate in R. sinicus cells may imply that R. sinicus bats were unlikely to be its proximal origin. However, bats are the primary origin of SARS-CoV, human coronavirus 229E (HCoV-229E), and probably MERS-CoV; therefore, SARS-CoV-2 most likely originated from bats. One possibility is that SARS-CoV-2 has restricted bat species tropism. Other bat species, such as R. affinis, may harbor the ancestor of SARS-CoV-2 and can be tested for cellular susceptibilities in future studies. It is also possible that SARS-CoV-2 can no longer replicate in bat cells because of substantial genetic adaptation, such as through natural evolution in an intermediate host before infecting humans.

The difference in critical residues for receptor binding between SARS-CoV and SARS-CoV-2 may have contributed to their differential infectivities in R. sinicus cells, as suggested by results from structural modeling of the receptor-binding interface. Whereas SARS-CoV RBD was most closely related to SARSr-Rs-BatCoV-WIV1 from R. sinicus, SARS-CoV-2 RBD was most closely related to the RBD region of pangolin-SARSr-CoV-MP789 from pangolins (14). Mutagenesis studies are needed to investigate whether changes of these amino acid sites may affect binding affinity to the ACE2 of different hosts and restore the infectivity of SARS-CoV-2 in R. sinicus cells.

The restricted cellular tropism of SARS-CoV and SARS-CoV-2 is different from that of MERS-CoV, which showed broad species tropism in bat cells. MERS-CoV could replicate in >5 bat cell lines (M. ricketti lung, P. abramus kidney, R. sinicus kidney and lung, and R. leschenaultii kidney cells) from 3 bat families (6). Although dromedary camels were the immediate source of MERS-CoV, bats were suggested to be the ultimate evolutionary origin (10,15). Of note, SARS-CoV, SARS-CoV-2, and MERS-CoV could all replicate in P. abramus kidneys at low titers. Structural modeling supported that P. abramus ACE2 could serve as host receptor for SARS-CoV and SARS-CoV-2. P. abramus is known to harbor Pi-BatCoV-HKU5 from the subgenus Merbecovirus (containing MERS-CoV) but not members of Sarbecovirus (containing SARS-CoV and SARS-CoV-2) (10,15). P. abramus is a potential accidental host for spillover of and source for emergence of diverse coronaviruses including SARSr-CoVs.

Dr. Lau is a professor and head of the Department of Microbiology at the University of Hong Kong. Her research focuses on microbial genomics for studying emerging infectious diseases including coronaviruses.

We thank Agriculture, Fisheries and Conservation Department, Government of Hong Kong, for capture of bats for bat cell development and expert opinion.

Page created: July 17, 2020
Page updated: November 19, 2020
Page reviewed: November 19, 2020
The conclusions, findings, and opinions expressed by authors contributing to this journal do not necessarily reflect the official position of the U.S. Department of Health and Human Services, the Public Health Service, the Centers for Disease Control and Prevention, or the authors' affiliated institutions. Use of trade names is for identification only and does not imply endorsement by any of the groups named above.