During the past 20 years, coronaviruses belonging to the genus Betacoronavirus have caused multiple human epidemic or pandemic diseases, including severe acute respiratory syndrome (SARS), Middle East respiratory syndrome (MERS), and coronavirus disease (COVID-19). Two viruses of the subgenus Sarbecovirus are severe acute respiratory syndrome coronavirus (SARS-CoV), which causes SARS, and SARS-CoV-2, which causes COVID-19. Although Rhinolophus spp. bats in Asia, Europe, and Africa are considered natural reservoirs of sarbecoviruses (1–3), the epidemiology and distribution of these viruses remain largely unknown, especially outside China. Previously, partial RNA-dependent RNA polymerase (RdRp) genes of betacoronaviruses were detected in little Japanese horseshoe bats (Rhinolophus cornutus) (4). However, limited sequence information left the genetic and virological properties unclear. We detected and determined the entire genome sequence of a bat sarbecovirus belonging to a phylogenetic clade that includes SARS-CoV-2 from R. cornutus bats in Japan. Further, we used a pseudotyped virus system to characterize an entry step of this virus into cells.

R. cornutus is an endemic bat species in Japan and is found nationwide. These bats primarily inhabit caves and abandoned tunnels in the countryside during daytime and capture insects at night outside their roosts. R. cornutus bats often cohabit with other insectivorous bats, such as R. ferrumequinum or Myotis macrodactylus, and occasionally with wild animals, such as the masked palm civet (Paguma larvata), in their daytime roosts.

In 2013, we captured 4 R. cornutus bats in a cave in Iwate prefecture, Japan, and extracted RNA from fresh feces. Then, we used real-time reverse transcription PCR (rRT-PCR) to detect the partial RdRp gene of sarbecovirus from 2 samples by using a pair of primers designed to detect betacoronavirus. In 2020, we performed RNA sequencing and determined the full genome sequence of 1 sample, Rc-o319, which exhibited lower cycle threshold value by rRT-PCR. 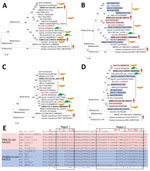 We performed a BLAST (https://blast.ncbi.nlm.nih.gov/Blast.cgi) analysis of the full genome of Rc-o319, which showed Rc-o319 had the highest nucleotide homology to SARS-CoV-2 HKG/HKU-904a/2020 strain (GenBank accession no. MT365032) with a query cover of 96% and sequence identity of 81.47%. The maximum-likelihood analysis with sarbecoviruses demonstrated that the full genome and spike protein (S) gene of Rc-o319 were positioned within a specific clade that included SARS-CoV-2 (Figure 1, panels A, B). Amino acid sequences of open reading frame 1ab (ORF1ab) and S of Rc-o319 also were positioned within the SARS-CoV-2 clade (Figure 1 panels C and D). The phylogenetic trees maintained the same topology between ORF1ab and S, indicating that no recombination event occurred in Rc-0319, which was supported by similarity plot analysis (Appendix Figure 1). The nucleotide and amino acid sequences of Rc-o319 were more homologous to those of viruses belonging to SARS-CoV-2 clade than the SARS-CoV clade (Table). These data suggest that Rc-o319 genetically is related to SARS-CoV-2.

To gain insight into the zoonotic potential of Rc-o319, we focused on angiotensin-converting enzyme 2 (ACE2) receptor binding motif (RBM) of the S protein (Figure 1, panel E). RBM has 2 regions (1 and 2); both are essential to human ACE2 (hACE2) recognition (5,6). Several S proteins of bat-origin sarbecoviruses that lack the ability to bind the hACE2 contain amino acid deletions in both regions (Figure 1, panel E) (5). However, the RBM of Rc-o319 S is unique because it has 9 aa deletions in region 2 only, which was not observed in other bat sarbecoviruses. Of note, most residues that contact hACE2, which were detected in the S protein of SARS-CoV-2 and SARS-CoV, were different or missing in the S protein of Rc-o319. Thus, current data do not enable inference for whether the Rc-o319 can use hACE2 as a cell entry receptor.

Figure 2. Infectivity titers of sarbecoviruses from bats and humans used to investigate bat sarbecovirus Rc-o319, which is genetically related to human SARS-CoV-2, Japan. Cells expressing each host-origin angiotensin-converting enzyme 2 were...

To evaluate the potential of ACE2 as a receptor for Rc-o319, we adopted a pseudotyped vesicular stomatitis virus (VSV) system, in which VSV glycoprotein envelope (G) gene is replaced by green fluorescent protein (GFP) gene. We generated VSV pseudotyped with S proteins of Rc-o319 (VSV-Rc-o319), SARS-CoV (VSV-SARS), SARS-CoV-2 (VSV-SARS-2), or VSV-G (VSV-VSV-G) in human embryonic kidney 293T (HEK293T) cells. We also constructed ACE2 expression plasmids from hACE2, R. ferrumequinum bats (Rf-ACE2), and R. sinicus bats (Rs-ACE2). R. ferrumequinum is another bat species inhabiting in Japan, and R. sinicus bats are a major host reservoir of bat sarbecoviruses. We also prepared a chimeric bat ACE2 from R. cornutus and R. ferrumequinum bats, Rc/Rf chimera, which has the N terminus of S protein interaction domain of Rc-ACE2 and the remaining region from Rf-ACE2 (Appendix Figure 2). The HEK293T cells expressing Rc-ACE2, Rf-ACE2, Rs-ACE2, Rc/Rf-ACE2, or hACE2 were produced by transfecting each ACE2-expression plasmid (Appendix Figure 3) and inoculating them with pseudotyped VSVs; their infectivity was titrated by counting GFP-positive cells at 20 hours postinfection (Figure 2). Our results showed that VSV-Rc-o319 infected Rc-ACE2– and Rc/Rf-ACE2–expressing cells, but not Rf-ACE2–, Rs-ACE2–, or hACE2–expressing cells or control cells transfected with empty vector plasmid. In contrast, VSV-SARS and VSV-SARS-2 more effectively infected hACE2-expressing cells than bat ACE2–expressing cells and control cells. VSV-VSV-G infected all tested cells to comparable levels, confirming ACE2-independent infectivity of VSV. These results suggest high specificity of ACE2 receptor between sarbecovirus and host cells and possibly a limited zoonotic potential of Rc-o319 in terms of cell receptor usage without adaptation to humans.

We next analyzed the membrane fusion step of Rc-o319 S. A previous study showed that human sarbecovirus S protein was proteolytically activated by cellular transmembrane serine protease 2 (TMPRSS2), in vitro and in vivo, inducing efficient virus-cell membrane fusion at the cell surface (7). We prepared a fusion assay, in which HEK293T cells were cotransfected with S-expression plasmid of Rc-o319, SARS-CoV, or SARS-CoV-2 and Rc-ACE2–, Rf-ACE2–, Rs-ACE2–, or hACE2-expression plasmid, together with fluorescent reporter Venus-expression plasmid with and without TMPRSS2-expression plasmid, and incubated for 24 h to assess syncytium formation. We observed that the S protein of SARS-CoV and SARS-CoV-2 required both hACE2 and TMPRSS2 for fusion activity (Appendix Figure 4), confirming the previous findings (7,8). In contrast, the S protein of Rc-o319 induced cell fusion only in Rc-ACE2–expressing cells, both in the presence and absence of TMPRSS2. These results suggest that unlike human sarbecoviruses, Rc-o319 uses Rc-ACE2 as a functional receptor, leading to membrane fusion independent of S-cleavage by TMPRSS2.

Among R. cornutus bats in Japan, we detected sarbecovirus Rc-o319, which is phylogenetically positioned in the same clade as SARS-CoV-2. Sarbecoviruses belonging to this clade previously were detected from other Rhinolophus spp. bats and pangolins (family Manidae) in China and could have played a role in the emergence of SARS-CoV-2 (9–11). We provide a hypothesis that a bat sarbecovirus with zoonotic potential might exist even outside China, because Rhinolophus spp. bats inhabit Asia, Europe, and Africa (12).

Receptor usage is one factor for cross-species transmission of viruses. Unlike a previous report that showed that some bat SARS-CoV–related viruses could use human and civet ACE2 and R. sinicus ACE2 as entry receptors (5,13,14), VSV-Rc-o319 was found to use only homologous Rc-ACE2, which arguably suggests that Rc-o319 and its related viruses might not jump the species barrier easily and cause infection. However, Rc-o319 and its related viruses could be transmitted accidentally from R. cornutus bats to cohabitant animals, such as civets, which are potential intermediate hosts for human infection (15). Therefore, further epidemiologic surveillance of bat betacoronaviruses, including evaluation of their zoonotic potential, is essential because betacoronaviruses that caused SARS, MERS, and COVID-19 outbreaks in humans during the past 20 years likely originated from bat betacoronaviruses.

Dr. Murakami is an associate professor at the Graduate School of Agricultural and Life Sciences, University of Tokyo, Tokyo, Japan. His research interests include epidemiologic and molecular biological studies of animal viruses, including coronaviruses and influenza viruses.

S.M. is supported by a Kakenhi Grant-in-Aid for Challenging Research (Exploratory) from the Japan Society for the Promotion of Science (grant no. 17K19319).

Page created: October 07, 2020
Page updated: November 19, 2020
Page reviewed: November 19, 2020
The conclusions, findings, and opinions expressed by authors contributing to this journal do not necessarily reflect the official position of the U.S. Department of Health and Human Services, the Public Health Service, the Centers for Disease Control and Prevention, or the authors' affiliated institutions. Use of trade names is for identification only and does not imply endorsement by any of the groups named above.