We describe 2 human cases of infection with a new Neisseria species (putatively N. brasiliensis), 1 of which involved bacteremia. Genomic analyses found that both isolates were distinct strains of the same species, were closely related to N. iguanae, and contained a capsule synthesis operon similar to N. meningitidis.

Neisseria is a genus containing diverse organisms; most are rarely pathogenic. N. meningitidis and N. gonorrhoeae are the most clinically relevant species. The polysaccharide capsule is the most critical meningococcal virulence factor, a vaccine target, and the basis for classifying meningococci into serogroups (1). During routine laboratory-based public health surveillance in Brazil, we identified 2 cases of infection caused by a previously uncharacterized species of the Neisseria genus.

Clinicians reported 2 cases to the National Reference Laboratory, Adolfo Lutz Institute (IAL), São Paulo, Brazil. Case-patient 1 was a 64-year-old man from Rio Grande do Sul state, Brazil, who, in June 2016, had congestive heart failure with bilateral pulmonary infiltrates and pleural effusion on chest radiograph. Case-patient 2 was a 74-year-old woman with leprosy from Paraná state, Brazil, who, in February 2016, developed a polymicrobially infected ulcer of the left lower extremity. The 2 cases were separated in time and by >400 km and had no known epidemiologic link.

Overnight cultures of blood from case-patient 1 and ulcer exudate from case-patient 2 on brain–heart infusion agar containing 10% chocolate and horse blood at 37°C in the presence of 5% CO2 both revealed brownish colonies uncharacteristic of N. meningitidis. We identified both isolates (N.95-16, from case-patient 1, and N.177-16, from case-patient 2) as gram-negative glucose-fermenting diplococci with positive catalase and oxidase tests. The isolates fermented maltose, lactose, sucrose, and fructose but not mannose; they reduced nitrate and produced a starch-like polysaccharide detected with Gram’s iodine but did not produce DNase. Assessment by matrix-assisted laser desorption/ionization time-of-flight mass spectroscopy found no species match; the closest matches belonged to the Neisseria genus for both isolates. 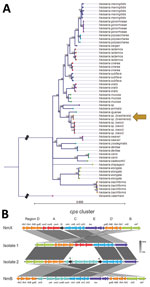 Both isolate genomes were 2.5 Mb and had 49.2% guanine-cytosine (GC) content. ANI was 99.3% between the 2 genomes and <86% relative to all other Neisseria species. The closest genome matches were N. iguanae and the proposed N. weixii, isolated from the intestinal contents of a Tibetan Plateau pika (Figure, panel A) (PubMLST identification 56407–56409; GenBank accession no. CP023429). Both genomes shared identical rMLST profiles (rST 61343); the 4 proposed N. weixii genomes shared only 1–2 alleles of 53 rMLST loci with these isolate genomes, and N. iguanae shared no rMLST alleles. Both genomes contained an intact capsule gene cluster (cps) that was similar in gene organization and sequence identity to N. meningitidis (Figure, panel B). The ctrA-cssA/csxA promoter region was conserved in both isolates. However, both genomes contained only 1 copy of galE-rfbCAB (Region D), compared with 2 copies found in meningococcal reference genomes; the tex gene was located >10 kb outside cps, upstream from ctrD (Figure, panel B). The 2 isolates differed in their sequence of sialic acid biosynthesis genes within region A; isolate N.95-16 contained csxABC genes that shared 98% amino acid identity with the meningococcal serogroup X reference strain α388 (1), and isolate N.177-16 contained cssABC-csb genes that shared 99% amino acid identity with serogroup B reference strain H44/76 (Figure, panel B). The cps differences observed between the isolates were similar to the mosaic recombination pattern associated with meningococcal capsular switching (9). Taken together, the presence of cps genes sharing substantial similarity to meningococcal homologs suggests that both isolates have the potential to synthesize meningococcal-like capsules.

In summary, we describe 2 sporadic cases of a new Neisseria species (which we propose to name Neisseria brasiliensis), 1 of which also involved bacteremia. Both genomes contain an intact repertoire of genes for capsule synthesis, a key meningococcal virulence factor. The significance of capsule genes and potential capsule synthesis in nonmeningococcal Neisseria is unknown (10). Continued surveillance is required to establish the pathogenic potential and host range for this apparent new species.

Dr. Mustapha is a research assistant professor in the department of medicine and a member of the Microbial Genomic Epidemiology Laboratory at the University of Pittsburgh School of Medicine, Pittsburgh, PA, USA. His research focuses on the genomic epidemiology of bacterial diseases.