We detected Crimean-Congo hemorrhagic fever virus infections in 4 provinces of Pakistan during 2017–2018. Overall, seroprevalence was 2.7% in humans and 36.2% in domestic livestock. Antibody prevalence in humans was highest in rural areas, where increased contact with animals is likely.

Crimean-Congo hemorrhagic fever (CCHF) is caused by CCHF virus (CCHFV), an emerging zoonotic virus belonging to the order Bunyavirales within the family Nairoviridae. The virus is maintained through a tick–vertebrate transmission cycle (1); the primary vectors are ticks from the genus Hyalomma (2,3). Wild and domestic mammals, including livestock species such as sheep, goats, and cattle, are amplifying hosts (2). CCHFV is listed as a high-priority zoonotic pathogen of humans in the World Health Organization Research and Development Blueprint (https://www.who.int/blueprint/priority-diseases) because of its potential to cause a public health emergency and the absence of specific treatment and vaccines.

Most human infections occur through the bite of infected ticks. Blood and other bodily fluids of infected animals represent an additional source for human infections. In humans, CCHF is manifested by fever, headache, vomiting, diarrhea, and muscular pain; bleeding diathesis with multiorgan dysfunction is seen in severe cases (4–6). CCHFV is endemic over a wide geographic area, spanning from western Asia to southern Europe and over most of Africa (2). Since the earliest identified CCHF case in 1976 (7), several outbreaks of CCHFV infection have been reported from Pakistan. Although Pakistan has the fourth highest number of human cases in Asia (2), no comprehensive surveillance study has been conducted to determine the disease prevalence in human and animal populations of Pakistan. Therefore, we determined the countrywide risk for CCHFV infection by detecting the virus and antibodies in livestock, ticks, and humans.

Figure 1. Indirect immunofluorescence assay results for Crimean-Congo hemorrhagic fever virus for 4 samples from humans that were positive by ELISA, Pakistan, 2016–2017. A, B) Samples at 1:100 dilution. C, D) Samples at... 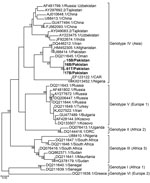 Four plasma samples from buffalo and 4 Rhipicephalus tick samples tested positive for CCHFV antigen by ELISA. Of these 8 positive samples, we confirmed 1 tick (T61) and 3 buffalo samples (15B, 16B, and 17B) through partial amplification and sequencing of the small (S) segment (260 bp). The 4 partial sequences of CCHFV S segments (GenBank accession nos. MN135938–MN135941) were 97%–95% identical to virus sequences found in Afghanistan (accession no. JX908640.1), Iran (accession no. KX096702.1), and Oman (accession no. KY362516.1) and clustered together with genotype IV (Asia) (Figure 2). We obtained full-length sequences of the CCHFV S, medium (M), and large (L) segments (accession nos. MN135942–MN135944) from the tick sample by sequencing on a HiSeq3000 (Illumina, https://www.illumina.com). Phylogenetic trees for the S, M, and L segments showed that the T61 strain clustered with genotype IV (Asia) (Appendix Figures 1–3).

This countrywide study of CCHFV in Pakistan strongly suggests virus circulation in specific geographic regions and suggests CCHFV foci and a potential source of human infections. Detection of the antibodies in domestic livestock species (including sheep, goats, cattle, buffalo, and camels) indicates a potential role of these animals in human infections. Demonstration of the virus in animal blood plasma and tick samples by reverse transcription PCR provides strong evidence of active circulation of CCHFV in Pakistan. Furthermore, genetic characterization of the virus reconfirms the circulation of genotype IV in Pakistan (8). Of interest, we found no Hyalomma tick positive for CCHFV; CCHFV has been reported from Rhipicephalus ticks from Iran and clustered together with strains from Pakistan and Iran, indicating that Rhipicephalus ticks have been naturally infected with closely related virus in the region (9). Our study further confirms the role of Rhipicephalus ticks in CCHFV circulation in the region. We observed higher prevalence of CCHFV antibodies in camels than in animals of other species, indicating the importance of camels in CCHFV ecology in Pakistan.

A high proportion of seropositive humans from Balochistan and Khyber Pakhtunkhwa with a history of exposure to animals is in concordance with earlier reports of CCHF in humans from these areas. The rural economy of Balochistan and Khyber Pakhtunkhwa is based on livestock production, and the increased contact with animals may explain the higher antibody prevalence in humans from these areas. Furthermore, the prevalence of antibodies was significantly higher among herdsmen than among the general population.

In summary, our results indicate the ongoing circulation of CCHFV among animals and humans in some regions of Pakistan. Longitudinal surveys to identify and define the genomic diversity of CCHFV in Pakistan and investigations to explore the exact role of camels in the ecology of this virus would help clarify the risk to the general population and occupational hazards for livestock farmers and veterinarians.

Dr. Zohaib is an assistant professor in the Department of Healthcare Biotechnology, National University of Sciences & Technology, Islamabad, Pakistan. His research interests include the detection and characterization of zoonotic viruses.

We thank the Livestock and Dairy Development Departments in Punjab and Balochistan Provinces, Pakistan. We thank the National Virus Resource Center (Wuhan, China) for providing the virus-infected Vero cells (accession no. IVCAS14.0001).