Population genetic analysis revealed that Plasmodium knowlesi infections in Malaysian Borneo are caused by 2 divergent parasites associated with long-tailed (cluster 1) and pig-tailed (cluster 2) macaques. Because the transmission ecology is likely to differ for each macaque species, we developed a simple genotyping PCR to efficiently distinguish between and survey the 2 parasite subpopulations. This assay confirmed differences in the relative proportions in areas of Kapit division of Sarawak state, consistent with multilocus microsatellite analyses. Analyses of 1,204 human infections at Kapit Hospital showed that cluster 1 caused approximately two thirds of cases with no significant temporal changes from 2000 to 2018. We observed an apparent increase in overall numbers in the most recent 2 years studied, driven mainly by increased cluster 1 parasite infections. Continued monitoring of the frequency of different parasite subpopulations and correlation with environmental alterations are necessary to determine whether the epidemiology will change substantially.

The monkey parasite Plasmodium knowlesi was discovered to be a common cause of malaria in humans in 2004, initially from investigations in the Kapit division of Sarawak state, Malaysian Borneo (1). Humans acquire infection primarily from wild long-tailed (Macaca fascicularis) and pig-tailed (M. nemestrina) macaque reservoirs (2); Anopheles mosquitoes of the leucosphyrus group are vectors (3,4). P. knowlesi malaria has been described across Southeast Asia, but most clinical cases are still reported in Malaysian Borneo (3,5–8). In 2017 and 2018, a total of 7,745 cases were reported in Malaysia, 86.8% of which were detected in Malaysian Borneo (B. Singh, unpub. data) (9). P. knowlesi infections can be asymptomatic (10,11), and clinical cases exhibit a wide spectrum of disease ranging from mild symptoms to death (3).

Increasing numbers of P. knowlesi malaria cases detected might be due to increased zoonotic exposure along with a reduction of endemic malaria parasite species (16). With the recent identification of different zoonotic P. knowlesi genetic subpopulations, determining whether these populations vary in frequency over space and time is important. Interactions with vectors and reservoir hosts will affect distributions of these parasite subpopulations, and human contacts with these vectors and reservoir hosts would determine zoonotic incidence. Because the previously used microsatellite genotyping and WGS are time consuming and expensive, we developed a simple PCR to discriminate between the 2 P. knowlesi subpopulations in Malaysian Borneo.

We identified high-quality bi-allelic single-nucleotide polymorphisms (SNPs) from whole-genome sequence data of P. knowlesi isolates from cluster 1 (n = 38) and cluster 2 (n = 10) subpopulations (15). We identified 9,293 SNPs with complete fixation of alternative alleles between the 2 subpopulations. Oligonucleotides for allele-specific PCRs were designed on the basis of genome regions with a high density of fixed SNPs and having multiple SNPs <5 nt apart, especially at the 3′ ends of the designed primers. For each subpopulation, we chose 5 pairs of forward and reverse PCR primers to evaluate for genotyping assays (Appendix Table 1).

We tested 10 PCRs on the basis of fixed SNP differences for performance in discriminating the 2 sympatric P. knowlesi subpopulations. Of these, 1 assay each for cluster 1 (primer pair C1A) and cluster 2 (primer pair C2J) showed complete specificity when tested on 5 cluster 1 and 9 cluster 2 DNA samples (Figure 1; Appendix Table 2) that were previously confirmed by microsatellites cluster assignments (13). These primers were also P. knowlesi–specific and did not show amplification on DNA of other simian malaria parasites (P. coatneyi, P. cynomolgi, P. fieldi, and P. inui) or human malaria parasites (P. falciparum, P. vivax, P. malariae, and P. ovale), or host DNA from humans or either macaque host species (Appendix Figure 1).

Figure 3. Proportions of Plasmodium knowlesi subpopulations in humans of the Kapit division, Sarawak state, Malaysian Borneo, 2000–2018. A total of 1,204 P. knowlesi infections were genotyped, and distribution patterns of subpopulation clusters...

In Kapit, where a high incidence of cases has been reported since the zoonosis was discovered to be common (1,7,18), we analyzed DNA samples from 1,204 human P. knowlesi infections collected in 3 study periods during 2000–2018. Of those infections, 69% belonged to the cluster 1 subpopulation (Figure 3, panel A; Appendix Table 4). Most (28%) of the remaining P. knowlesi infections belonged to the cluster 2 subpopulation, and only 2% had parasites of both types. During 3 study periods of 2000–2002 (n = 110 cases), 2006–2008 (n = 176 cases), and 2013–2018 (n = 918 cases), the proportion of cluster 1 and cluster 2 subpopulations showed similar patterns of distribution with cluster 1 subpopulation as the predominant ones (Pearson p = 0.74). We also observed similar patterns across 12 months of these study periods (Figure 3, panel B), indicating a lack of strong seasonal variation between cluster 1 and cluster 2 infections in Kapit (p = 0.56 by Fisher exact test). 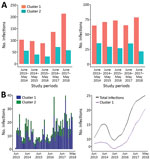 We conducted a more intensive analysis on infections sampled during the most recent 5-year study period (June 2013–May 2018); we made a particular effort to recruit most of the case-patients seeking care at Kapit Hospital during this time. Of the 918 infections genotyped from this period, 637 were cluster 1 infections, 258 were cluster 2 infections, and 23 were mixed cluster infections. The proportion of cluster 1 infections always ranged from 63% to 78% (Pearson p = 0.007) and was highest in the most recent year. The total number of P. knowlesi cases was also highest in the most recent year (Figure 4, panel A). Using an STL decomposition method of analysis based on numbers plotted on a monthly basis (Figure 4, panel B), we noted a trend of increasing numbers of cases overall, as well as of the cluster 1 subpopulation separately, from June 2016 onward. We found no significant trend for cluster 2 cases separately.

On the basis of fixed SNP differences between the 2 P. knowlesi genetic subpopulations in Malaysian Borneo, identified by whole-genome sequence data analysis (14,15), we successfully developed an allele-specific PCR for discriminating these in large-scale studies. This method enables identification of cluster 1 and cluster 2 subpopulations from field isolates throughout the sympatric distribution, without the need to perform population genetic analysis of multilocus data on all samples. A different P. knowlesi subpopulation termed cluster 3 has been described to account for all cases in Peninsular Malaysia (13,15), but we did not study that subpopulation because it has not been detected in Malaysian Borneo.

The use of these allele-specific PCRs is limited to P. knowlesi infections in Malaysian Borneo because they were designed on the basis of the genome sequences of the cluster 1 and cluster 2 parasites found there. These assays could potentially be applied to analyze P. knowlesi infections in Kalimantan, Indonesian Borneo, which shares international borders with Malaysian Borneo. The allopatric divergence of cluster 3 subpopulations in Peninsular Malaysia (13) indicates the need for development of a separate allele-specific PCR for those parasites, which would require analysis of whole-genome data from substantially more P. knowlesi isolates from Peninsular Malaysia.

The validation of this allele-specific PCR shows remarkable sensitivity with single-round (nonnested) amplification, even at a parasitemia of ≈4 parasites/μL blood. Although all samples tested from patients at Kapit Hospital could be genotyped, this PCR would have limitations on subpatent P. knowlesi infections when parasites are undetectable under the microscope (10,11,20).

No clear evidence of direct human–mosquito–human transmission of P. knowlesi has yet been detremined, although such transmission might be occurring. Most hospitalized P. knowlesi malaria patients have been adult farmers or logging camp workers, who regularly spend time in forests or forest fringes, or travelers entering forests (3), suggesting that macaque–vector–human transmission is the primary route of infection (21). Although the distribution of long-tailed and pig-tailed macaques overlaps throughout Southeast Asia, these macaque species show different habitat preferences (22). The preference of long-tailed macaques for cropland, wetland, and urban areas brings them in close proximity to humans, but whether transmission occurs outside of the forests is not known. The widespread distribution of long-tailed macaques corresponds with the cluster 1 parasite subpopulation accounting for most P. knowlesi infections in Kapit. The lower frequency of the cluster 2 subpopulation in humans is as expected, given that those parasites are associated with pig-tailed macaques, which occur in more remote forested areas (22).

Like many other vectorborne parasitic diseases, malaria is sensitive to environmental changes such as deforestation (23); the association between incidences of P. knowlesi infections and environmental changes in Sabah, Malaysian Borneo, supports this fact (16,24), because overall numbers of cases have increased in the past few years (8). We have shown that most of the cases in Sabah are of the cluster 1 genetic subpopulation of P. knowlesi, and that numbers of this parasite subpopulation have increased in Kapit in the most recent 2 years of the study period. Whether changes in the landscape in Sarawak or other factors have contributed to the increasing numbers of P. knowlesi cases needs to be studied. Determining whether any significant differences exist between the clinical outcomes after infection with the different subpopulations also is important. Such determination requires collecting detailed clinical and laboratory data on P. knowlesi patients infected with the 2 different subpopulation clusters and performing careful association study analysis to deliver robust inference for the benefits of both clinicians and public health experts.

P. knowlesi infections require separate efforts from those being targeting elimination of human malaria (P. falciparum and P. vivax), particularly in Malaysia, where zoonotic malaria is dominant (25). Although P. knowlesi is not part of the national elimination program (26), monitoring this parasitic infection is crucial because of its increasing incidence. Zoonotic malaria requires new strategies in prevention and control, including monitoring of the different parasite genetic subpopulations.

We thank colleagues at the Malaria Research Centre of UNIMAS and the London School of Hygiene and Tropical Medicine, as well as medical laboratory technologists in Kapit Hospital, Sarawak, for laboratory assistance. We also thank the Director General of Health in Malaysia for permission to publish this article.

Dr. Divis is a senior lecturer at the Faculty of Medicine and Health Sciences and a research fellow at the Malaria Research Centre in UNIMAS, Malaysia. His research interests include molecular epidemiology, population genetics, and genomics of P. knowlesi.