Klebsiella pneumoniae is a threat to human health because of the emergence of hypervirulent K. pneumoniae, which has caused severe community-acquired infections, and classical multidrug-resistant K. pneumoniae involved in hospital outbreaks (1). Classical K. pneumoniae generally lacks the virulence genes associated with invasive diseases (1) and belongs to successful clonal groups, such as sequence type (ST) 11 and ST258 (2). Most hypervirulent K. pneumoniae isolates, which are mainly found in Asia (3,4), belong to the K1 and K2 capsular serotypes and are restricted to clonal complexes different from classical multidrug-resistant K. pneumoniae groups, such as K1-ST23, the most prevalent group (2). They rarely harbor acquired antimicrobial resistance genes but have virulence loci and a hypermucoviscous phenotype (5). We describe 2 hypermucoviscous K2-ST86 K. pneumoniae (positive string test) resistant to carbapenems isolated in northern and southern France.

In 2017, we recovered the Kpn154 strain from the urine of a 35-year-old man with community-acquired urinary tract infection. He had fever (39°C) before local symptoms suggesting urinary tract infection caused by bacteremic spread, which was successfully treated with intravenous ceftriaxone. A second strain, Kpn2166, was hospital-acquired and recovered from the feces of a 70-year-old man in the intensive care unit of the hospital at which the 35-year-old patient was seem. Neither patient reported travel during the past 4 years. Both strains were resistant to all penicillins and their combinations with β-lactamase inhibitors, and to carbapenems according to EUCAST (European Committee on Antimicrobial Susceptibility Testing) guidelines (https://www.eucast.org) (Table). In addition, Kpn2166 was resistant to the third-generation cephalosporins, quinolones and tigecycline.

We obtained the isolates’ whole-genome sequence by hybrid de novo assembly of short and long reads generated with technologies from Illumina (https://www.illumina.com) and Oxford Nanopore (https://nanoporetech.com; European Nucleotide Archive at EMBL-EBI under accession no. PRJEB34867). We typed the isolates as K2-ST86 from whole-genome sequencing using the Institut Pasteur multilocus sequence typing scheme (https://bigsdb.pasteur.fr) and Kleborate (6). Kpn154 harbored carbapenemase-encoding gene blaoxa-48 and Kpn2166 the extended-spectrum β-lactamase–encoding gene blaCTX-M-15 as the only acquired β-lactamase–encoding genes. CTX-M-15 associated with the truncation of the outer membrane protein OmpK36 caused by 11-bp deletion was probably responsible for carbapenem resistance in Kpn2166. In the absence of rpsJ variants previously associated with tigecycline resistance, Kpn2166 resistance to tigecycline and quinolones probably resulted from a frameshift mutation in ramR (C→T at position 364) (7).

We identified IncL replicon in Kpn154 and IncN replicon in Kpn2166. The IncL replicon of Kpn154 was a canonical pOXA-48–like plasmid encoding blaOXA-48 (GenBank accession no. JN626286). In the Kpn2166 isolate, blaCTX-M-15 was encoded by a new ST9-IncN plasmid, included in an IS26-based composite transposon and downstream a truncated ISEcp1 insertion sequence.

Each isolate harbored an IncHI1B/IncFIB replicon, designated pVIR-Kpn154 and pVIR-Kpn2166 (Table), typified by the reference hvKP virulence plasmid pLVPK (8). They shared with pLVPK 97% pairwise identity overall and all virulence genes, including the rmpA and rmpA2 genes involved in the hypermucoid phenotype (8). We typed the rmpA genes as allele 2 according to the Institut Pasteur scheme. However, Kpn2166 rmpA2 harbored in addition a frameshift mutation (coding sequence [CDS] position 196) and 2 other mutations in virulence genes encoding the siderophores (Appendix Figure 1). 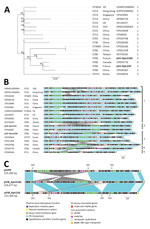 The chromosome of Kpn154 and Kpn2166 exhibited similar organization but differed by 128 insertion/deletion mutations and 1,928 single-nucleotide variants (Appendix Figures 2, 3). The Kpn154 chromosome-mediated ybt virulence locus, which encodes the yersiniabactin, was located in the integrative conjugative element ICEKp3 and was typed ybST202–1LV (6). In Kpn2166, ybt was located in an original isoform of ICEKp12, presenting an ≈34-kb deletion compared to the canonical 97,771-bp ICEKp12, and was typed ybST13–1LV (6).

Although Kpn154 and Kpn2166 have the same genetic background and share the same virulence score (6), they also have allelic and synteny differences in virulence genes. We therefore compared the virulence of these isolates in a sepsis model based on outbred mice challenged intraperitoneally, as described (Figure 2) (10). Mice injected with 103 CFUs of Kpn154 or hypervirulent K. pneumoniae reference strain K. pneumoniae NTUH-2044 died in <72 h, in contrast to mice inoculated with Kpn2166 or American Type Culture Collection (ATCC) 13883, showing that only isolate Kpn154 is hypervirulent. Higher bacterial doses (106 and 108 CFUs) of ATCC13883 and Kpn2166 did not lead to mouse lethality, confirming that Kpn2166 is not hypervirulent in this model, despite harboring all genetic attributes of hypervirulent K. pneumoniae except a functional rmpA2 gene and allelic variants of siderophore-encoding genes.

We assessed the production of siderophores in Kpn154, Kpn2166 and the control strains as described (11). Although the siderophore production of the nonvirulent strain ATCC13883 (mean 30.2 + SD 1.8 μg/mL) was at the previously reported rate predicting hypervirulent K. pneumoniae phenotype (≥30 μg/mL), the other strains produced significantly higher siderophore levels (107.2 + 4.5 μg/mL to 306.7 + 20.2 μg/mL; Bonferroni-adjusted p = 0.0035 by Mann-Whitney test), with Kpn154 producing at the lower level (Appendix Figure 4).

Our results show that a hypermucoviscous K2-ST86 strain can be avirulent in a sepsis mouse model and that hypervirulence cannot be clearly explained by siderophore production alone. Gene rmpA2, not required for the hypermucoviscosity phenotype as previously observed (12), might be required for hypervirulent phenotype because it is a main, but not the only, difference we observed between the ST86-K2 strains. Finally, these results highlight the importance of in vivo virulence investigation to identify hypervirulent K. pneumoniae, especially in the absence of an appropriate clinical scenario.

The threat of hypervirulent K. pneumoniae acquiring carbapenem resistance is becoming a reality in Asia, especially in China, where hypervirulence prevalence among carbapenem-resistant K. pneumoniae is 7.4%–15% (5). Most resistant isolates are non-K1/K2-ST11 and produce carbapenemase KPC-2;. they result from the transfer of the pLVPK-like plasmid into ST11 classical multidrug-resistant K. pneumoniae isolates, as observed in the 2 cases reported outside China (5). Inversely, the carbapenemase-producing isolate Kpn154 results from the transformation of K2-ST86 hypervirulent K. pneumoniae by plasmid encoding carbapenemase OXA-48, the most prevalent carbapenemase in France. Similar events occurred with the KPC-2 K2-ST86 isolate recently reported in Canada (13) and a few KPC-2 and NDM K1-ST23 cases documented in China and recently in the United States and United Kingdom (5,14,15). The combination of multidrug resistance and enhanced virulence has the potential to trigger the next clinical crisis and cause severe and untreatable infections in previously healthy persons.

We thank Alexis Pontvianne and Lucie Pourpuech for their technical assistance.