Cases of severe acute respiratory syndrome coronavirus 2 (SARS-CoV-2) infection exported from mainland China could lead to self-sustained outbreaks in other countries. By February 2020, several countries were reporting imported SARS-CoV-2 cases. To contain the virus, early detection of imported SARS-CoV-2 cases is critical. We used air travel volume estimates from Wuhan, China, to international destinations and a generalized linear regression model to identify locations that could have undetected imported cases. Our model can be adjusted to account for exportation of cases from other locations as the virus spreads and more information on importations and transmission becomes available. Early detection and appropriate control measures can reduce the risk for transmission in all locations.

A novel coronavirus, later named severe acute respiratory syndrome coronavirus 2 (SARS-CoV-2), was identified in December 2019 in the city of Wuhan, capital of Hubei Province, China, where cases were first confirmed (1). During December 2019–February 2020, the number of confirmed cases increased drastically. Model estimates suggested that >75,000 persons were infected by January 25, 2020, and the epidemic had a doubling time of ≈6 days (2). By the end of January 2020, travel restrictions were implemented for Wuhan and neighboring cities. Nonetheless, the virus spread from Wuhan to other cities in China and outside the country. By February 4, 2020, a total of 23 locations outside mainland China reported cases, 22 of which reported imported cases; Spain reported a case caused by secondary transmission (3).

Most cases imported to other locations have been linked to recent travel history from China (3), suggesting that air travel plays a major role in exportation of cases to locations outside of China. To prevent other cities and countries from becoming epicenters of the SARS-CoV-2 epidemic, substantial targeted public health interventions are required to detect cases and control local spread of the virus. We collected estimates of air travel volume from Wuhan to the 27 most connected locations outside of China from a total of 194 international destinations. We then identified 49 locations with high surveillance capacity according to the Global Health Security (GHS) Index (4). We assumed these locations would have relatively high proficiency in detecting SARS-CoV-2 and reporting confirmed imported cases, which we refer to as imported-and-reported cases. We ran a generalized linear regression model on this subset of locations; based on this model fit, we generated predictions for all international locations. Using these predictions, we identified locations that might not be detecting imported cases.

To identify locations reporting fewer than predicted imported SARS-CoV-2 infected cases, we fit a model to data from 49 locations outside mainland China that had a score of >49.2/100 (the 75th quantile) of the GHS Index’s category 2 (Early Detection and Reporting of Epidemics of Potential International Concern) (4). Among these, 17 had high travel connectivity to Wuhan and 32 had low connectivity to Wuhan (S. Lai et al., unpub. data, https://doi.org/10.1101/2020.02.04.20020479). We considered locations to be countries without taking any position on territorial claims. We performed a Poisson regression by using the cumulative number of imported-and-reported SARS-CoV-2 cases in these 49 countries and the estimated number of daily airline passengers from the Wuhan airport. We then compared predictions from this model with imported-and-reported cases across 194 locations from the GHS Index, excluding China as the epicenter of the outbreak.

We obtained data on daily air travel from a network-based modeling study (S. Lai et al., unpub. data, https://doi.org/10.1101/2020.02.04.20020479) that reported monthly air travel volume estimates for the 27 locations outside mainland China that are most connected to Wuhan. These estimates were calculated from International Air Travel Association data from February 2018, which includes direct and indirect flight itineraries from Wuhan. For these 27 locations, estimated air travel volumes are >6 passengers/day. We assumed that travel volumes for locations not among the most connected are censored by a detection limit. We used a common method of dealing with censored data from environmental sampling (5), or metabolomics (6), and set the daily air travel volume to half the minimum value. Therefore, we used 3 passengers/day for estimated travel volumes for the 167 locations from the GHS Index not listed by Lai et al. We tested the robustness of our results by using a set of alternative values of 0.1, 1, and 6 passengers/day for the censored data.

For our model, we assumed that the cumulative imported-and-reported case counts across 49 high surveillance locations follow a Poisson distribution from the beginning of the epidemic until February 4, 2020. Then the expected case count is linearly proportional to the daily air travel volume in the following formula:

where i denotes location, Ci denotes the imported-and-reported case count in a location, λi denotes the expected case count in a location, β denotes the regression coefficient, and xi denotes the daily air travel volume from Wuhan to a location. The Poisson model assumes cases are independent and that the variance is equal to the expected case count. Imported-and-reported cases likely meet the independence assumption because the value excludes cases with local transmission. We also checked the robustness of our results by using an over dispersed model with a negative binomial likelihood. We computed the p value of the overdispersion parameter as shown in Gelman and Hill (7). 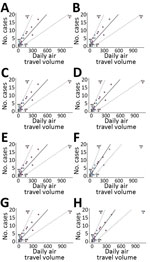 We aimed to identify locations with likely undetected or underdetected imported cases of SARS-CoV-2 by fitting a model to the case counts in locations with high surveillance capacity and Wuhan-to-location air travel volumes. Our model can be adjusted to account for exportation of cases from locations other than Wuhan as the outbreak develops and more information on importations and self-sustained transmission becomes available. One key advantage of this model is that it does not rely on estimates of incidence or prevalence in the epicenter of the outbreak. Also, we intentionally used a simple generalized linear model. The linearity of the expected case count means that we have only 1 regression coefficient in the model and no extra parameters. The Poisson likelihood then captures the many 0-counts observed for less highly connected locations but also describes the slope between case-count and flight data among more connected locations. We believe this model provides the most parsimonious phenomenologic description of the data.

According to our model, locations above the 95% PI of imported-and-reported cases could have higher case-detection capacity. Locations below the 95% PI might have undetected cases because of expected imported-and-reported case counts under high surveillance. Underdetection of cases could increase the international spread of the outbreak because the transmission chain could be lost, reducing opportunities to deploy case-based control strategies. We recommend rapid strengthening of outbreak surveillance and control efforts in locations below the 95% PI lower bound, particularly Indonesia, to curb potential local transmission. Early detection of cases and implantation of appropriate control measures can reduce the risk for self-sustained transmission in all locations.

Declaration of interests: Marc Lipsitch has received consulting fees from Merck. All other authors declare no competing interests.

Page created: April 02, 2020
Page updated: June 18, 2020
Page reviewed: June 18, 2020
The conclusions, findings, and opinions expressed by authors contributing to this journal do not necessarily reflect the official position of the U.S. Department of Health and Human Services, the Public Health Service, the Centers for Disease Control and Prevention, or the authors' affiliated institutions. Use of trade names is for identification only and does not imply endorsement by any of the groups named above.