Leishmaniasis is a complex disease with cutaneous, mucocutaneous, or visceral manifestations depending on the parasite species and host immunity. Despite continued elimination efforts, leishmaniasis continues to afflict known and newer endemic regions, where 0.5–0.9 million new cases of visceral leishmaniasis (VL) and 0.6–1.0 million new cases of cutaneous leishmaniasis (CL) occur every year (1). An increase in VL and CL cases from newer foci and atypical disease manifestation pose a challenge to leishmaniasis control programs (2–7). Unlike the known species-specific disease phenotype, parasite variants can cause atypical disease, so that Leishmania species generally associated with VL can cause CL and vice versa.

In India, VL caused by L. donovani parasites in the northeastern region and CL caused by L. tropica in the western Thar Desert represent the prevalent forms of the disease (2). Himachal Pradesh is a more recently leishmaniasis-endemic state in northwest where VL and CL coexist; CL incidence is higher than VL incidence and most cases are attributable to L. donovani instead of L. tropica infection (8,9). Sharma et al. conducted limited molecular analysis of a few CL cases and reported preliminary findings (8). For an in-depth study on the involvement of L. donovani parasites in CL cases, we conducted a comprehensive molecular analysis of CL cases in Himachal Pradesh.

During 2014–2018, an increase in CL cases occurred in Himachal Pradesh; case reports came from different tehsils (i.e., townships) in Kinnaur, Shimla, and Kullu and the previously nonendemic districts of Mandi and Solan (Appendix Table 1, Figure 1). We confirmed 60 CL cases indigenous to the state with detailed patient information, demonstration of the presence of Leishman-Donovan bodies and CL-specific histopathologic changes in skin lesional specimens, and PCR detection of parasitic infection (Appendix). 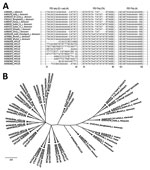 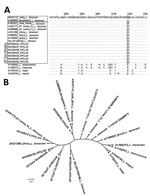 Sequences of the 6-phosphogluconate dehydrogenase gene (6PGDH) exhibit a high degree of polymorphism and have been used to identify Leishmania species and differentiate region-specific zymodemes (14). We performed multiple sequence alignment of the representative partial 6PGDH amino acid sequences from Himachal Pradesh isolates by using the homologous 6PGDH protein sequences of the reference Leishmania isolates to determine their genetic and geographic relatedness (Table 2; Figure 2, panel A; Appendix Table 4, Figure 5). Himachal Pradesh isolates exhibited a 6PGDH sequence specific to Mon-37 and different from Mon-2 (having aspartic acid in place of asparagine) at position 326 (Figure 2, panel A). Thus, CL-causing L. donovani from Himachal Pradesh were distinct from the most common VL-causing India Mon-2 L. donovani and the Bangladesh L. donovani isolate, whereas they were similar to the CL-causing L. donovani isolate from Kerala and CL- and VL-causing Mon-37 isolates from Sri Lanka and the isolates from Kenya, Brazil, and China.

Phylogenetic analysis of 6PGDH amino acid sequences of CL isolates grouped them into a heterogeneous cluster; variants were closer to a viserotropic L. donovani isolate from Sri Lanka and distinct from the VL-causing L. donovani isolates from India and Bangladesh and CL-causing isolates from Kerala and Sri Lanka (Figure 2, panel B). However, the HPCL55 isolate (GenBank accession no. MH208450) grouped differently. The HPCL49 isolate (GenBank accession no. MH208446) showed relatedness to the standard L. infantum strain, although ITS1 analysis using BLAST and microsatellite repeat sequences showed regions of similarity with L. donovani. ITS1 and 6PGDH sequence analysis suggest that Himachal Pradesh isolates from CL patients consist of heterogenous L. donovani variants and possibly represent hybrid genotypes.

None of the CL patients had VL-specific symptoms or VL history. Ten of 43 patient blood samples tested positive for rK39 antibody, and 37 of 51 samples were positive for the circulating parasite DNA with L. donovani–specific ITS1 (Appendix Figure 6, panel A, B). The result suggests asymptomatic systemic L. donovani infection in a fraction of CL patients.

L. donovani parasites in the blood of some CL patients represent human reservoirs similar to asymptomatic VL carriers, and the parasite variants have the potential to cause full-blown VL manifestations. An elaborate surveillance program dedicated to the Himachal Pradesh region is urgently required for better diagnosis, treatment, prediction of parasite variants in different afflicted pockets, and prevention of transmission of the disease to other regions.

Ms. Thakur is a PhD student in the Department of Zoology at the Central University of Punjab, Bathinda, Punjab, India. Her primary research interests include the epidemiology and pathogenesis of infectious and parasitic diseases.

We thank Greg Matlashewski for his helpful suggestions and comments to improve the manuscript, Wen Wei Zhang for technical suggestions, and Rentala Madhubala for generously gifting Leishmania donovani and L. major standard cultures.

Page created: June 10, 2020
Page updated: July 18, 2020
Page reviewed: July 18, 2020
The conclusions, findings, and opinions expressed by authors contributing to this journal do not necessarily reflect the official position of the U.S. Department of Health and Human Services, the Public Health Service, the Centers for Disease Control and Prevention, or the authors' affiliated institutions. Use of trade names is for identification only and does not imply endorsement by any of the groups named above.