We provide a detailed molecular and phylogenetic description of Bertiella studeri tapeworms infecting children in Sri Lanka. Our findings can be used to identify multiple species of Bertiella tapeworms that can infect human hosts in the Old World.

The genus Bertiella, which has 29 known tapeworm species, belongs to the subfamily Anoplocephalinae of the Anoplocephalidae family (1). These tapeworms are common parasites in the small intestine of primates (2). Of these species, only B. studeri, B. mucronata, and B. satyri (3), which was recently redescribed as a different species (4), can infect humans (4,5). Children acquire this infection usually by eating contaminated fruits or by ingesting contaminated soil. The earliest identified cases of human bertiellosis in Sri Lanka occurred in 1975; these cases and 1 further case were reported in 1976. Six cases were reported in the literature from 1988–2006 (6). The most recent report was in 2006 from Rathnapura, Sabaragamuwa Province, Sri Lanka (7).

The morphologic, taxonomic, and molecular analysis of several species classified in the family Anoplocephalidae are not well documented (6). A recent study has identified an unexpected genetic diversity that suggests the existence of several Bertiella species in primates and humans (6,8). Multiple species of Bertiella tapeworms may infect humans in the New World and the Old World. It is not certain whether the Old World and New World Bertiella infections, previously all identified as B. studeri or B. mucronata, actually represent multiple different species; the true taxonomic distinction and geographic distribution of these 2 species are not entirely clear (6). Furthermore, diagnosis entirely based on egg morphology, size, and geographic distribution is insufficient to discriminate B. studeri tapeworms from other Bertiella spp. infecting humans (9).

This study provides the molecular analysis of the B. studeri tapeworms infecting children in Sri Lanka and describes phylogenetic relationships for this species. The Ethics Review Committee in the Faculty of Medicine, University of Peradeniya, Sri Lanka approved this study (protocol no. 2019/EC/03).

We conducted a retrospective study using tapeworm proglottids (Appendix Figure 1) from 24 pediatric patients referred to the Department of Parasitology, Faculty of Medicine, University of Peradeniya, Peradeniya, Sri Lanka, during 2007–2017. Patients were all <10 years of age (range 3.5–9 years). No other epidemiologic data were available.

Figure 1. Molecular phylogeny of the mitochondrial markers in a study of Bertiella tapeworms in children in Sri Lanka. Bold text indicates B. studeri samples from Sri Lanka. A) Maximum-likelihood tree containing 25... 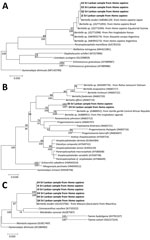 Records we examined showed patients had white, flat, motile worm segments in stools, and some patients had reported abdominal disturbances and intermittent diarrhea. Previous studies reported recurrent abdominal pain and continuous perianal itching, anorexia, weight loss, and intermittent diarrhea in infected patients (6); however, these symptoms are not unique to Bertiella infection, and so the correct diagnosis of bertiellosis is important. Treatment failure for B. studeri worms using niclosamide was reported in a 30-month-old patient in Sri Lanka in 2004 (10) and in a 5-year-old patient in Sabaragamuwa Province, Sri Lanka (7).

Our results suggest an intraspecific diversity of Bertiella tapeworms. Such diversity may occur according to the host and the geographic location. A previous study conducted by Doležalová et al. (8,11) has suggested a broad genetic diversity among the Bertiella species in primates and humans; further studies are required to support this suggestion. According to the available demographic data, most of the patients resided in Central Province, Sri Lanka; the most likely reason that they comprised most patients is the Bertiella tapeworm reservoir hosts, particularly Ceylon torque monkey (Macaca sinica) and gray langur (Presbytis entellus), that inhabit this region (12,13). Over time, these monkey populations have lost their habitats due to deforestation and rapid urbanization in Sri Lanka; they are now regular visitors in suburban and urban areas scavenging for food near human settlements, which has increased human exposure to B. studeri infection (14,15).

Unavailability of molecular data for B. studeri 28S, COX1, and NAD1 markers in GenBank was a constraint that we encountered during phylogenetic analysis. In our study, we generated molecular data for 2 mitochondrial markers (NAD1, COX1), and 3 nuclear ribosomal markers (28S, 18S, ITS2) and submitted them to GenBank (Appendix). The molecular data obtained can be used for further analysis in diagnostics, to discern phylogenetic relationships and evolutionary correlations, and to understand the transmission dynamics of B. studeri tapeworms. Our data may also be used to assist in elucidating if multiple species of Bertiella sp. tapeworms infect human hosts in the Old World.

Ms. Amarasinghe is a research assistant in the Department of Parasitology, Faculty of Medicine, University of Peradeniya, Sri Lanka. She is particularly interested in parasitology research.

This study was funded by the University Research Grant (no. URG/2018/31/M), University of Peradeniya, Sri Lanka.

A.A. carried out the laboratory work, sequence analysis, and wrote the manuscript with input from all authors. T.H.L. carried out DNA sequencing. S.W. performed sequence analysis, manuscript writing, and finalized the manuscript. S.W. had the final responsibility for the decision to submit for publication. All authors reviewed the draft and approved the decision to submit for publication.

Page created: July 14, 2020
Page updated: July 19, 2020
Page reviewed: July 19, 2020
The conclusions, findings, and opinions expressed by authors contributing to this journal do not necessarily reflect the official position of the U.S. Department of Health and Human Services, the Public Health Service, the Centers for Disease Control and Prevention, or the authors' affiliated institutions. Use of trade names is for identification only and does not imply endorsement by any of the groups named above.