By April 30, 2020, South Korea had reported 10,765 cases of coronavirus disease (COVID-19) (1); ≈76.2% of cases were from Daegu and North Gyeongsang provinces. On February 25, a COVID-19 case was detected in Cheonan, a city ≈200 km from Daegu. In response, public health and government officials from Cheonan and South Chungcheong Province activated the emergency response system. We began active surveillance and focused on identifying possible COVID-19 cases and contacts. We interviewed consecutive confirmed cases and found all had participated in a fitness dance class. We traced contacts back to a nationwide fitness dance instructor workshop that was held on February 15 in Cheonan.

Fitness dance classes set to Latin rhythms have gained popularity in South Korea because of the high aerobic intensity (2). At the February 15 workshop, instructors trained intensely for 4 hours. Among 27 instructors who participated in the workshop, 8 had positive real-time reverse transcription PCR (RT-PCR) results for severe acute respiratory syndrome coronavirus 2, which causes COVID-19; 6 were from Cheonan and 1 was from Daegu, which had the most reported COVID-19 cases in South Korea. All were asymptomatic on the day of the workshop. 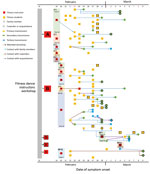 Figure. Case map of confirmed coronavirus disease (COVID-19) cases associated with fitness dance classes in Cheonan, South Korea, by date of symptom onset and relationship. Instructors outside of Cheonan are excluded. In...

By March 9, we identified 112 COVID-19 cases associated with fitness dance classes in 12 different sports facilities in Cheonan (Figure). All cases were confirmed by RT-PCR; 82 (73.2%) were symptomatic and 30 (26.8%) were asymptomatic at the time of laboratory confirmation. Instructors with very mild symptoms, such as coughs, taught classes for ≈1 week after attending the workshop (Appendix). The instructors and students met only during classes, which lasted for 50 minutes 2 times per week, and did not have contact outside of class. On average, students developed symptoms 3.5 days after participating in a fitness dance class (3). Most (50.9%) cases were the result of transmission from instructors to fitness class participants; 38 cases (33.9%) were in-family transmission from instructors and students; and 17 cases (15.2%) were from transmission during meetings with coworkers or acquaintances.

The instructor from Daegu who attended the February 15 workshop had symptoms develop on February 18 and might have been presymptomatic during the workshop. Evidence of transmission from presymptomatic persons has been shown in epidemiologic investigations of COVID-19 (4,5).

Characteristics that might have led to transmission from the instructors in Cheonan include large class sizes, small spaces, and intensity of the workouts. The moist, warm atmosphere in a sports facility coupled with turbulent air flow generated by intense physical exercise can cause more dense transmission of isolated droplets (6,7). Classes from which secondary COVID-19 cases were identified included 5–22 students in a room ≈60 m2 during 50 minutes of intense exercise. We did not identify cases among classes with <5 participants in the same space. Of note, instructor C taught Pilates and yoga for classes of 7–8 students in the same facility at the same time as instructor B (Figure; Appendix Table 2), but none of her students tested positive for the virus. We hypothesize that the lower intensity of Pilates and yoga did not cause the same transmission effects as those of the more intense fitness dance classes.

A limitation of our study is the unavailability of a complete roster of visitors to the sports facilities, which might have meant we missed infections among students during surveillance and investigation efforts. Discovery of outbreak cases centered on exercise facilities led to a survey of instructors who participated in a fitness dance workshop and provided clues to identifying additional cases among students. Early identification of asymptomatic persons with RT-PCR–confirmed infections helped block further transmissions. Because of the increased possibility of infection through droplets, vigorous exercise in closely confined spaces should be avoided (8) during the current outbreak, as should public gatherings, even in small groups (9,10).

We thank the state, local, and territorial health department personnel for providing the reported coronavirus disease data; patients in Dankook University Hospital participating in interviews and providing data; and the Dankook University College of Medicine for their support. We also thank Editage (http://www.editage.co.kr) for English language editing.

Page created: May 15, 2020
Page updated: July 19, 2020
Page reviewed: July 19, 2020
The conclusions, findings, and opinions expressed by authors contributing to this journal do not necessarily reflect the official position of the U.S. Department of Health and Human Services, the Public Health Service, the Centers for Disease Control and Prevention, or the authors' affiliated institutions. Use of trade names is for identification only and does not imply endorsement by any of the groups named above.