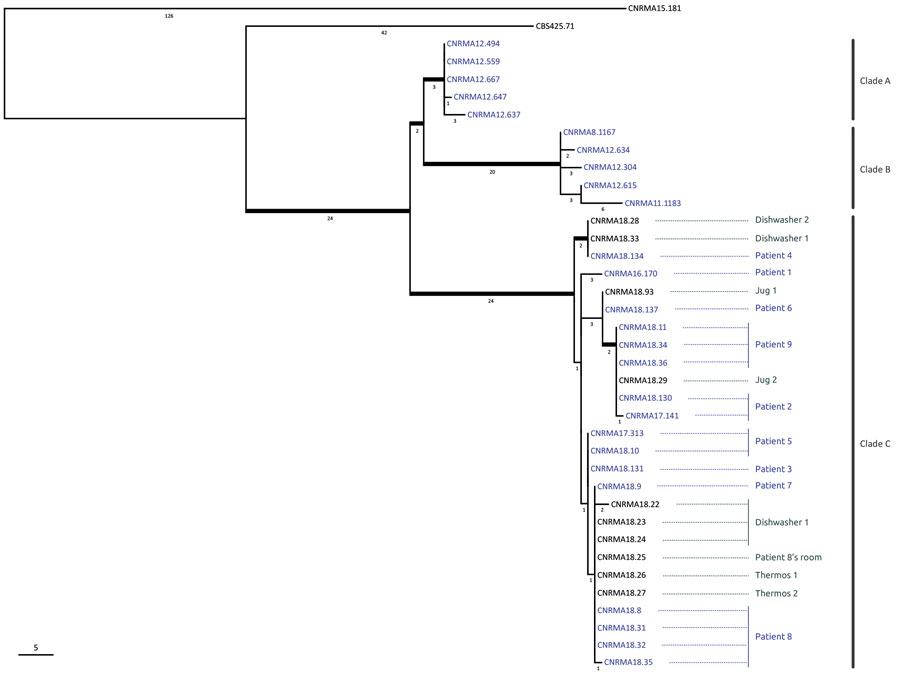 Figure 3. Phylogenetic tree of 38 Saprochaete clavata isolates, including isolates from outbreak of Saprochaete clavata at the Institut Paoli-Calmettes, Marseille, France, February 2016–December 2017. The unrooted maximum-likelihood tree was inferred from 12,053,164 nt characters with evolutionary model HKY (Hasegawa, Kishino, and Yano, 1985) + FO (base frequencies optimized by ML) + I (proportion of invariable sites optimized by ML). Thick branches are supported by >70% bootstrap supports (500 replicates). The approximated number of single-nucleotide polymorphisms is indicated below each branch. Blue indicates clinical isolates; gray indicates nonclinical isolates. Patient numbers correspond to those in the Table; clades A, B, and C are indicated at the right. Scale bar indicates single-nucleotide polymorphisms.

Page created: June 16, 2020
Page updated: August 18, 2020
Page reviewed: August 18, 2020
The conclusions, findings, and opinions expressed by authors contributing to this journal do not necessarily reflect the official position of the U.S. Department of Health and Human Services, the Public Health Service, the Centers for Disease Control and Prevention, or the authors' affiliated institutions. Use of trade names is for identification only and does not imply endorsement by any of the groups named above.