An asymptomatic person infected with severe acute respiratory syndrome coronavirus 2 returned to Heilongjiang Province, China, after international travel. The traveler’s neighbor became infected and generated a cluster of >71 cases, including cases in 2 hospitals. Genome sequences of the virus were distinct from viral genomes previously circulating in China.

Coronavirus disease (COVID-19), caused by severe acute respiratory syndrome coronavirus 2 (SARS-CoV-2), has spread rapidly around the world since the first cases were reported in late 2019 (1,2). Prior to April 9, 2020, Heilongjiang Province, China, had not reported a new COVID-19 diagnosis since March 11, 2020. On April 9, SARS-CoV-2 was diagnosed in 4 patients. By April 22, >71 persons had been infected. The likely origin of this cluster is an imported case from an asymptomatic traveler. 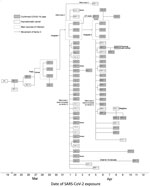 Figure. Timeline of exposure and connections between cases of severe acute respiratory syndrome coronavirus 2 (SARS-CoV-2) among persons in Heilongjiang Province, China. A0 returned from the United States on March 19, tested...

We collected and analyzed epidemiologic data published on the website of the Health Commission of Heilongjiang Province for April 9–23, 2020 (3). We defined confirmed COVID-19 cases as persons who tested positive for SARS-CoV-2 and had clinical symptoms. We defined asymptomatic carriers as persons without clinical symptoms who tested positive for SARS-CoV-2. We refer to case-patients by a letter for each family (A–Z, AA–ZZ), then by the assumed transmission generation (1–2), and finally in sequential order of exposure to SARS-CoV-2–positive persons in generations 1–3 (Figure) (4).

On March 19, 2020, case-patient A0 returned to Heilongjiang Province from the United States; she was asked to quarantine at home. She lived alone during her stay in Heilongjiang Province. She had negative SARS-CoV-2 nucleic acid and serum antibody tests on March 31 and April 3.

On April 2, C1.1 suffered a stroke and was admitted to hospital 1. His sons, C1.2 and C1.3, cared for him in ward area 1 of the hospital. Patient C1.1 shared the same clinical team and items, such as a microwave, with other patients in the ward. On April 6, patient C1.1 was transferred to hospital 2 because of fever; C1.2 and C1.3 accompanied him.

On April 9, investigators also learned that A0, B1.1’s neighbor, had returned on March 19 from the United States, where COVID-19 cases had been detected. Investigators performed SARS-CoV-2 serum antibody tests on A0 on April 10 and 11. SARS-CoV-2 serum IgM was negative but IgG was positive, indicating that A0 was previously infected with SARS-CoV-2 (5,6). Therefore, we believe A0 was an asymptomatic carrier (7,8) and that B1.1 was infected by contact with surfaces in the elevator in the building where they both lived (9). Other residents in A0’s building tested negative for SARS-CoV-2 nucleic acids and serum antibodies.

On April 15, the Chinese Center for Disease Control and Prevention sequenced the entire genomes of 21 samples from the cluster. Viral genomes were identical in 18 cases and 3 other cases had a difference of 1–2 nucleotides, indicating that SARS-CoV-2 came from the same point of origin. The viral genome sequences from the cluster were distinct from the viral genomes previously circulating in China, indicating the virus originated abroad (10) and suggesting case A0 was the origin of infection for this cluster.

All persons associated with this cluster, including those who lived in the same community and had close contact with SARS-CoV-2–positive patients or visited the 2 hospitals during April 2–15, were tested for SARS-CoV-2 nucleic acids and serum antibodies. As of April 22, 2020, A0 remained asymptomatic, and a total of 71 SARS-CoV-2–positive cases had been identified in the cluster.

Our results illustrate how a single asymptomatic SARS-CoV-2 infection could result in widespread community transmission. This report also highlights the resources required for case investigation and challenges associated with containment of SARS-CoV-2. Continued measures to protect, screen, and isolate infected persons are essential to mitigating and containing the COVID-19 pandemic.

Mr. Liu is a PhD candidate in Huazhong University of Science and Technology. He also conducts research in Hubei University of Medicine. His primary research interest is neurodegenerative diseases.

The opinions expressed by authors contributing to this journal do not necessarily reflect the opinions of the Chinese Centers for Disease Control and Prevention or the institutions with which the authors are affiliated.

Page created: June 26, 2020
Page updated: August 20, 2020
Page reviewed: August 20, 2020
The conclusions, findings, and opinions expressed by authors contributing to this journal do not necessarily reflect the official position of the U.S. Department of Health and Human Services, the Public Health Service, the Centers for Disease Control and Prevention, or the authors' affiliated institutions. Use of trade names is for identification only and does not imply endorsement by any of the groups named above.