Prolonged SARS-CoV-2 RNA detection has led to evaluation of molecular assays to detect subgenomic RNA (sgRNA) or negative-strand RNA, which are produced during active viral replication (2–5,8–10). sgRNA detection has predominantly been studied in hospitalized adults who have COVID-19 (2,3,5,8,9); published reports have not compared sgRNA and antigen detection, which should be highly correlated. We compared real-time reverse transcription PCR (rRT-PCR) detection of nucleocapsid sgRNA, the most abundant sgRNA in SARS-CoV-2‒infected cells (2), with nucleocapsid antigen detection among symptomatic outpatients who had SARS-CoV-2 infections.

We extracted total nucleic acids from 500 μL of sample and eluted them into a volume of 50 μL by using an EMAG Instrument (bioMérieux, https://www.biomerieux.com). We tested eluates side-by-side in rRT-PCRs for sgRNA and total SARS-CoV-2 RNA (genomic plus sgRNA). For sgRNA, we combined a forward primer in the leader sequence (5′-CGATCTCTTGTAGATCTGTTCTC-3′) with the nucleocapsid 2 (N2) target reverse primer and probe (11).

We performed the sgRNA assay in 20-μL reactions using the Luna Probe One-Step RT-qPCR Kit (New England Biolabs, https://www.neb.com) with 500 nmol/L of each primer, 250 nmol/L of probe, and 5 μL of eluate by using the following conditions: 55°C for 15 min, 95°C for 2 min, and 45 cycles of 95°C for 15 s and 60°C for 60 s. We detected total SARS-CoV-2 RNA by using a duplex N2-RNase P rRT-PCR performed as described (12). We obtained an anterior nares swab specimen for nucleocapsid antigen detection with the Abbott BinaxNOW COVID-19 Ag Card (swabs supplied with the BinaxNOW kit; Abbott Laboratories, https://www.abbott.com) performed per the package insert.

We estimated nucleocapsid sgRNA as a percentage of total RNA by calculating copies per microliter of sgRNA and total RNA for each sample based on a standard curve for each target and then calculating the percentage of sgRNA. We used unpaired t-tests to compare continuous variables and the Fisher exact test for testing categorical variables. We performed simple linear regression to compare cycle threshold (Ct ) values for sgRNA and total RNA. We conducted analyses by using GraphPad version 9.02 (https://www.graphpad.com) and SAS version 9.4 (https://support.sas.com).

Figure 1. Correlation of sgRNA levels with total SARS-CoV-2 RNA in samples from study participants in Atlanta, Georgia, USA. A) N2 Ctvalues for samples in which sgRNA was detectable (gray...

The evaluation group included midturbinate swab specimens from 36 adults and 37 children. All samples (73/73) were positive for SARS-CoV-2 by rRT-PCR. Samples with detectable sgRNA (62/73, 84.9%) had significantly lower Ct values, indicative of higher viral loads, than samples without detectable sgRNA (mean Ct 25.1, SD 5.5, vs. mean Ct 35.5, SD 2.6; p<0.0001) (Figure 1, panel A). sgRNA was detectable in all samples (49/49) that had N2 Ct values <30 compared with 13 (54.2%) of 24 samples that had Ct values >30 (p<0.0001). Although sgRNA rRT-PCR amplification efficiency was slightly lower than that for the N2 assay, there was a strong linear correlation between sgRNA and N2 Ct values (Figure 1, panel B), and the assay provided linear sgRNA detection across the range of N2 Ct values observed in this study (Appendix Figure 2). sgRNA Ct values were a mean of 4.8 (SD 1.8) cycles higher than corresponding N2 Ct values, and nucleocapsid gene sgRNA accounted for a mean of 1.4% (SD 1.1%) of SARS-CoV-2 RNA. Samples from children had higher viral loads than samples from adults, although the relative amount of sgRNA did not differ (Appendix Figure 3). 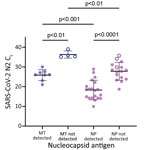 Limitations of our study include a relatively small number of midturbinate swab specimens tested in the antigen-testing group, which was affected by the need for multiple swab specimens at a single time point. The race/ethnicity makeup of groups that had midturbinate and nasopharyngeal swab specimens differed (Tables 1, 2), although this limitation is not expected to have affected our findings (15).

In conclusion, sgRNA detection in midturbinate swab specimens correlates with nucleocapsid antigen and could be implemented as a molecular test to evaluate infectivity. Given the strong correlation between sgRNA, nucleocapsid antigen, and total SARS-CoV-2 RNA, these data also support use of antigen testing or establishment of rRT-PCR Ct values as markers of active replication.

At the time of this study, Ms. Immergluck was a research specialist in the Division of Infectious Diseases, Emory University School of Medicine, Atlanta, GA. She is currently completing her final year at Pomona College, Claremont, CA. Her research interest is development of new molecular methods for the detection of RNA viruses.

We thank the staff of the Atlanta Center for Microsystems Engineered Point-of-Care Technologies for their contributions and efforts, and study participants and family members for providing samples and clinical information.

Page created: August 18, 2021
Page updated: October 19, 2021
Page reviewed: October 19, 2021
The conclusions, findings, and opinions expressed by authors contributing to this journal do not necessarily reflect the official position of the U.S. Department of Health and Human Services, the Public Health Service, the Centers for Disease Control and Prevention, or the authors' affiliated institutions. Use of trade names is for identification only and does not imply endorsement by any of the groups named above.