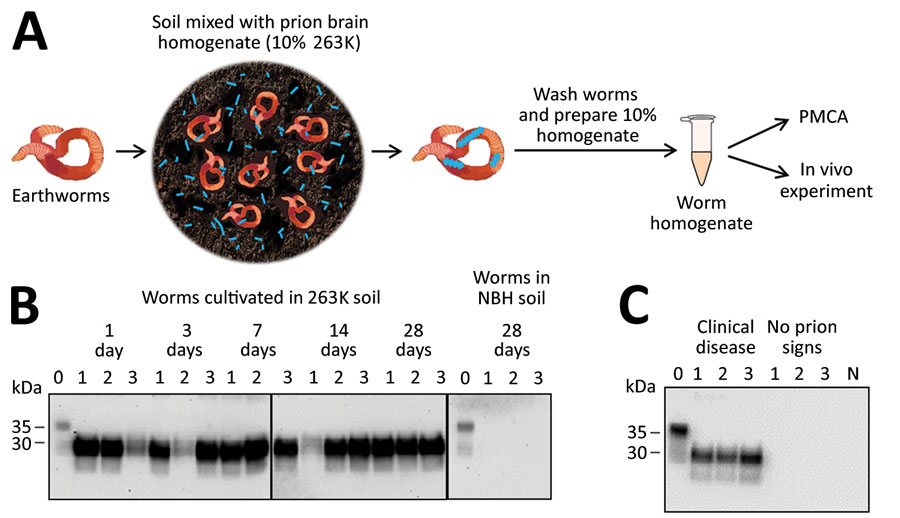 Figure 1. Detection of prion protein (PrPSc) attached to earthworms by PMCA and infectivity bioassay. A) Process for exposing earthworms to infected soil. Earthworms were placed in soil mixed with 10% wt/vol infected 263K hamster brain homogenate for 1, 3, 7, 14, or 28 days; worms were washed thoroughly, then prepared into a 10% homogenate for analysis. B) Results of PMCA on earthworms exposed to contaminated soil. As a control, earthworms also were exposed to soil mixed with NBH for 28 days and analyzed with the same methods. For each measurement, 3 worms were analyzed per time point in 3 different gels but blotted in the same membrane. Lane 0 is NBH used as a positive control for electrophoretic migration of the normal prion protein (PrPC); lanes 1–3 indicate 3 different worms. Vertical lines between images depict membrane splicing. Numbers on the left indicate molecular weight markers. C) Biochemical analysis of brains of hamsters infected with worm homogenate. Groups of hamsters were injected with homogenates from 3 different worms exposed to prion contaminated soil; many of the animals developed prion disease (Appendix Figure 2). Brains were collected and homogenized and samples were digested with proteinase K (Sigma Aldrich, https://www.sigmaaldrich.com) at 50 µg/mL for 1 h at 37°C, except NBH (lane labeled N) used as a migration control. Numbers on the left indicate molecular weight markers. Results confirmed the presence of PrPSc accumulation in the brain of animals showing clinical signs of prion disease. NBH, normal hamster brain homogenate; PMCA, protein misfolding cyclic amplification.