We used metagenomic analysis to identify Tacheng tick virus 2 infection in a patient with a history of tick bite in northwestern China. We confirmed the virus with reverse transcription-PCR, virus isolation, and genomic analysis. We detected viral RNA in 9.6% of ticks collected from the same region.

Emerging pathogenic tickborne viruses have attracted much attention because of the increasing incidence of tickborne viral diseases and their effects on human health (1–4). In 2015, high-throughput sequencing of samples from ticks in China revealed several novel phleboviruses, including Tacheng tick virus 2 (TcTV-2), Changping tick virus 1, Bole tick virus 1 (BlTV-1), Lihan tick virus, Yongjia tick virus 1, and Dabieshan tick virus (5). However, the risk for human infection from these viruses is not yet known. We report on TcTV-2 infection in patient in China and describe methods for virus isolation and genomic analysis.

The patient was a 38-year-old man who lived in northwestern China and had frequent contact with horses and sheep. On May 29, 2019, he noticed a tick embedded on his left upper arm and removed it himself. He noted a localized rash with slight pain and discomfort. On June 16, fever developed and soon after the patient had chills, severe fatigue, headache, anorexia, nausea, and vomiting. On June 20, he was admitted to the local hospital with a temperature of 37.9°C, which increased to 39.5°C the next day. The patient was initially given intravenous cefotaxime sodium and levofloxacin for 3 days for suspected tickborne bacterial disease, but these treatments did not alleviate his symptoms.

Figure 1. Clinical and morphological features of Tacheng tick virus 2 in a patient, China. A) Erythema at the site of tick bite on the anterior surface of the patient’s left arm....

On June 24, the patient was admitted to the First Affiliated Hospital of Medical College of Shihezi University in Shihezi. Physical examination showed erythema at the bite site (Figure 1, panel A) and neck stiffness. Cerebrospinal fluid (CSF) analysis showed a total of 1.07 × 108 nucleated cells (92% hyaline leukocytes and 8% pleocaryocytes), an increased protein level (0.99 g/L), and decreased levels of CSF glucose (2.3 mmol/L) and chloridion (116.0 mmol/L). The patient was given intravenous ceftriaxone for 12 days, but still experienced headache, nausea, and vomiting, and his erythema was not decreasing.

Blood, throat swabs, urine, and CSF samples were obtained from the patient on days 9, 16, and 40 after illness onset. We tested the patient samples by PCR or reverse transcription-PCR (RT-PCR) for potential tickborne pathogens, including severe fever with thrombocytopenia syndrome virus, tickborne encephalitis virus, Borrelia burgdorferi sensu lato, Anaplasma, Babesia, Rickettsia spp., Tacheng tick virus 1, TcTV-2, Tacheng tick virus 5, BlTV-1, and Bole tick virus 4 (2). We detected TcTV-2 by metagenomic analysis on blood collected on day 9 and confirmed the virus by RT-PCR targeting the large (L) gene (Appendix Tables 1, 2). We detected TcTV-2 in blood, throat swabs, and urine samples from the patient. We ruled out bacterial infection in blood and CSF by using routine culture methods and 16S rRNA gene broad-range PCR, which confirmed that no bacterial infection occurred in this patient.

On July 18, the patient was admitted to the hospital again. He was given intravenous acyclovir for 12 days and his clinical symptoms and erythema vanished without any sequelae (Appendix Table 3). 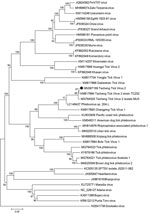 Figure 2. Phylogenetic analysis based on partial amino acid sequences of the L segment of tickborne viruses. Black dot indicates Tacheng tick virus 2 isolated from the patient in this study. The...

To identify local natural virus hosts in the environment, 345 adult ticks were collected in the area where the patient lived, including 108 Dermacentor marginatus, 183 D. nuttalli, 12 D. silvarum, and 42 Hyalomma asiaticum. We extracted total RNA of each tick and detected TcTV-2 by using RT-PCR with TcTV-2–specific primers (Appendix Table 1). Among 345 ticks, 33 (9.6%) carried TcTV-2. We noted high infection rates in D. silvarum (16.7%), D. marginatus (14.8%), H. asiaticum (11.9%), and D. nuttalli (5.5%). We obtained the partial fragments of the S segment of TcTV-2 in ticks and phylogenetic analyses showed that sequences from TcTv-2 in ticks were closely related to the isolate from the patient (Appendix Figure 1, Table 5).

We tried to obtain the medium (M) segment of TcTV-2 by designing a set of primers based on the conservative sequences of M segments from 15 typical phleboviruses (Appendix Table 6). We used these primers to amplify the M segment from both the patient and positive ticks detected by sequencing the L and S segments by using RT-PCR. We further analyzed the metagenomic sequences, but the results were negative.

Among currently known emerging tickborne phleboviruses, severe fever with thrombocytopenia syndrome virus and Heartland virus have been reported to infect humans and cause multiple organ damage, including to the liver and kidneys (1,13). In this study, TcTV-2 did not show any growth in Vero, human foreskin fibroblasts, or baby hamster kidney 21 cells, but had low level replication and growth in SMMC-7721 cells, indicating that the virus is not well adapted to mammals and likely is more common in arthropods than in mammals.

Transmission electron microscopy showed that TcTV-2 might harbor glycoprotein encoded by the M gene segment. The lack of M sequence data on homology-based approaches could indicate that insufficient homology exists between these viruses to detect the M gene in this manner. Sequencing methods that obtain a greater depth of coverage might help obtain the missing M sequences. To increase the virus titer and the likelihood of obtaining the M sequence, we recommend performing deep sequencing on the isolated virus.

TcTV-2 previously was identified in D. marginatus ticks from China (5) and in H. marginatum ticks from Turkey (12). We detected TcTV-2 in D. nuttalli, D. silvarum, H. asiaticum ticks and in blood, urine, and throat swab samples from a patient with febrile illness. Our findings suggest that person-to-person transmission might be possible through direct contact with body fluids or by droplet transmission. In addition, we noted more tick species found in northwest China that could act as TcTV-2 vectors (14), but this finding should be verified in further studies. Nonetheless, our study demonstrates that TcTV-2 could be emerging and infecting humans. Clinicians should consider TcTV-2 infections in patients with febrile illness and recent history of tick bites.

Dr. Dong is a scientist at the School of Medicine, Shihezi University, Shihezi, China. Her research interest is emerging tickborne diseases.

Page created: December 23, 2020
Page updated: February 02, 2021
Page reviewed: February 02, 2021
The conclusions, findings, and opinions expressed by authors contributing to this journal do not necessarily reflect the official position of the U.S. Department of Health and Human Services, the Public Health Service, the Centers for Disease Control and Prevention, or the authors' affiliated institutions. Use of trade names is for identification only and does not imply endorsement by any of the groups named above.