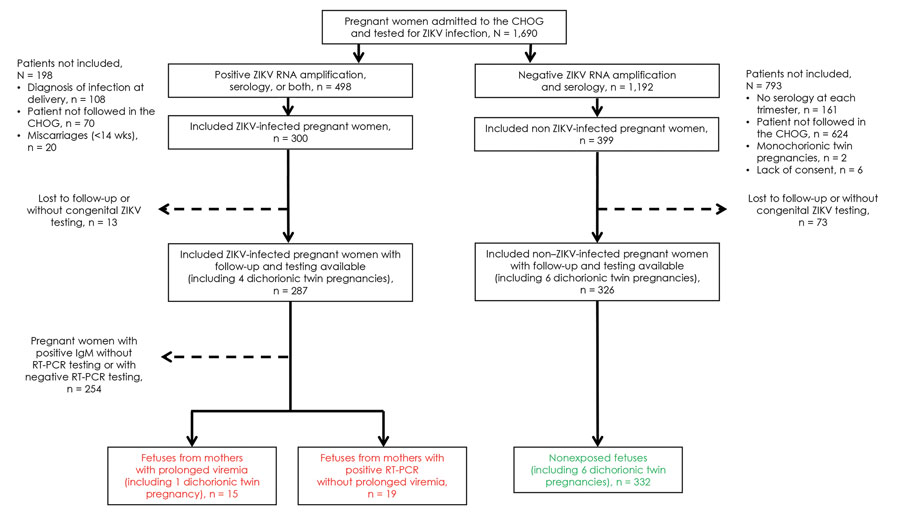 Figure 1. Flowchart of pregnant women admitted to CHOG, French Guiana, January 1–July 15, 2016. All women were routinely tested for ZIKV-specific IgM and IgG in each trimester of pregnancy and at delivery. In cases of maternal symptoms, acute exposure in the previous 2 weeks, fetal anomalies, or if an amniocentesis was indicated, pregnant women were also tested for ZIKV RNA by RT-PCR in blood and urine. Patients with a positive RT-PCR result were offered to participate in the study and underwent monthly RT-PCR testing up to clearance or delivery. Prolonged viremia was defined as ongoing viral detection >30 days after symptom onset or after initial detection of viremia. Asymptomatic patients who remained negative for ZIKV IgM during the whole pregnancy were recruited and considered as non–ZIKV-infected. Patients with only positive IgM without or with a negative RT-PCR test result were excluded of this analysis because of the inability to accurately date the onset and clearance of viremia. Patients without appropriate monthly follow-up were also excluded from this study (e.g., those who had early miscarriages, late diagnosis of infection at delivery, or were not followed in our center after the diagnosis). After expulsion, fetal losses were tested by RT-PCR (as well as by IgM, if available). Fetuses with anomalies were tested by RT-PCR on amniotic fluid. Neonates were tested for ZIKV at birth (RT-PCR on placenta, urine, blood and IgM on blood [as well as on cerebrospinal fluid, if symptomatic]). Fetuses and neonates without appropriate testing and examination after fetal loss or birth were excluded from this analysis. Overall, 15 fetuses from 14 infected pregnant women with prolonged viremia (including 1 with a twin pregnancy), 19 fetuses from 19 infected pregnant women without prolonged viremia, and 332 fetuses from 326 noninfected pregnant women (including 6 with twin pregnancies) were included. CHOG, Centre Hospitalier de l’Ouest Guyanais (Saint-Laurent-du-Maroni, French Guiana); RT-PCR, reverse transcription PCR; ZIKV, Zika virus.

Page created: December 10, 2020
Page updated: January 23, 2021
Page reviewed: January 23, 2021
The conclusions, findings, and opinions expressed by authors contributing to this journal do not necessarily reflect the official position of the U.S. Department of Health and Human Services, the Public Health Service, the Centers for Disease Control and Prevention, or the authors' affiliated institutions. Use of trade names is for identification only and does not imply endorsement by any of the groups named above.