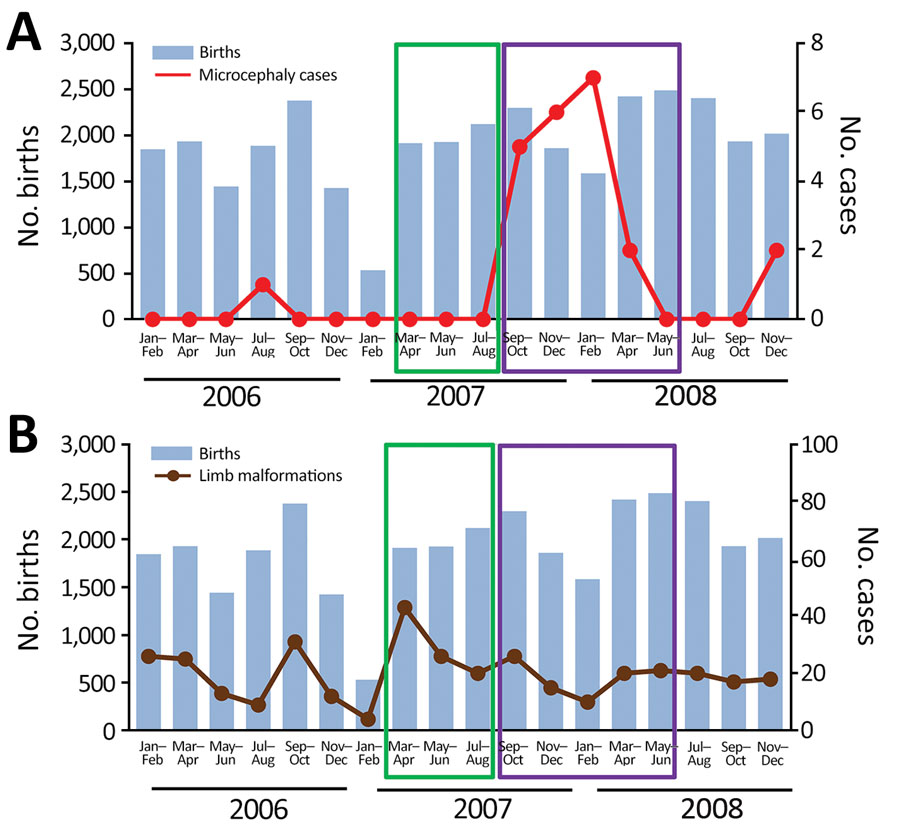 Figure. Cases of microcephaly (A) and limb malformations (B) in Libreville, Gabon, during January 2006–December 2008. Histograms correspond to the total number of births over the time of the study period. Scales for the y-axes differ to underscore patterns but do not permit direct comparisons. Green boxes encompass the time period when the febrile illness outbreak happened; purple boxes encompass the time period of births of infants whose mothers could have been exposed to Zika in their first trimester of pregnancy during the outbreak. Numbers of births were collected from birth registers by 2-month periods from January–February 2006 through November–December 2008. (Births are recorded in the registers in such a way that we were unable to obtain data for single months.) The duration of the febrile illness outbreak was estimated by the Health Ministry of Gabon during April 2007–August 2007, based on information communicated by hospitals. The febrile illness outbreak coincided with an increase in the number of patients seeking treatment for painful febrile illnesses at healthcare centers beginning in April 2007. The end of the outbreak in August 2017 coincided with the disappearance for >15 days of grouped clinical cases and with negative test results from samples.

Page created: October 15, 2020
Page updated: January 24, 2021
Page reviewed: January 24, 2021
The conclusions, findings, and opinions expressed by authors contributing to this journal do not necessarily reflect the official position of the U.S. Department of Health and Human Services, the Public Health Service, the Centers for Disease Control and Prevention, or the authors' affiliated institutions. Use of trade names is for identification only and does not imply endorsement by any of the groups named above.