We report an epidemiologic analysis of 4,210 cases of infection with severe acute respiratory syndrome coronavirus 2 and genetic analysis of 313 new near-complete virus genomes in Panama during March 9–April 16, 2020. Although containment measures reduced R0 and Rt, they did not interrupt virus spread in the country.

In Panama, the first confirmed COVID-19 case was reported on March 9, 2020. Although Panama rapidly implemented disease control strategies, it is among the countries in Latin America with the highest cumulative rates of incidence and death (4). To elucidate the transmission and spread of SARS-CoV-2 in the region, we analyzed epidemiologic surveillance data and newly generated genetic data from Panama.

To perform molecular detection of SARS-CoV-2, the Panama Ministry of Health implemented a surveillance program on January 20, 2020. The National Committee on Bioethics of Research of Panama approved protocol EC-CNBI-202–04–46.

We evaluated the early transmission dynamics of COVID-19 in Panama for the first 62 days of the epidemic (February 15–April 16, 2020) based on reported dates of symptom onset. We estimated the daily growth rate, doubling time, and basic (R0) and time-varying (Rt) effective reproduction numbers. We performed genome amplification and sequencing according to ARTIC Network protocol (https://artic.network) for Illumina Sequencing (https://www.illumina.com) (5). Details of epidemic parameters, sequencing, and genome analysis are described in Appendix 2.

A total of 18,559 suspected cases of COVID-19 had been investigated in Panama by April 16. Of these, 4,210 (22.7%) patients tested positive for SARS-CoV-2 infection by qualitative reverse transcription PCR. The first confirmed case, on March 9, corresponded to a patient who had arrived in Panama from Spain on March 8 and had exhibited symptoms beginning on March 6. The first case not related to travel was confirmed after the death on March 7 of a patient in whom symptoms first appeared on February 22. Epidemiologic investigation showed that the date of onset of symptoms for the earliest local case related to that fatal case dates back to February 15, 2020 (Figure 1). In most locally detected cases, patients had mild disease symptoms (Appendix 2 Figure 1, panel A).

Panama was the 11th country in Latin America to report SARS-CoV-2 and implemented epidemic control strategies rapidly compared with other countries in the region (Appendix 2 Figure 4). After the first confirmed case (March 9), school closures were implemented within 1 day, social distancing measures within 6 days, and 24-hour stay-at-home curfew within 14 days. Over the course of the next 17 days, Rt dropped to 1.08 (95% Cl 1.00−1.17) (Appendix 2 Table 1, Figure 3, panel C). However, until April 16, Panama remained the country in Central America with the highest proportional number of cases and fatalities (Appendix 2 Figure 5). 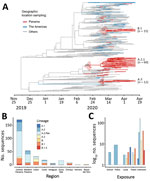 Figure 2. Genetic diversity of SARS-CoV-2 in Panama. A) Bayesian maximum clade credibility tree of 1,261 SARS-CoV-2 sequences: 133 from Panama; 492 from North or South America (443 genomes are from Brazil,...

Central and western Panama had more diverse lineage distributions (Figure 2, panel B). These regions encompass the capital and its surroundings, where more than 50% of the national population lives and the main international airport is located. Lineage A.2.1 was found in all regions across the country with no obvious spatial pattern; according to a global analysis of SARS-CoV-2 lineages (https://cov-lineages.org), this lineage is composed of sequences predominantly from Panama. We also found that the spike glycoprotein variants D614 and G614 (9,10) were cocirculating early in the epidemic among all the regions analyzed and were comprised of multiple lineages (Appendix 2 Figure 8, panel B), but the G614 variant potentially associated with infectivity (9) was detected in only 18.8% of the sequenced cases (Appendix 2 Figure 8, panel C).

Epidemiologic evidence suggested cryptic circulation of SARS-CoV-2 in Panama with a probable introduction during early February. A high median transmission potential of SARS-CoV-2 was estimated at R0 = 2.22 (2.08–2.37), similar to estimates from China, Brazil, and Europe (11–13). Rt rapidly dropped to 1.08 after implementation of control strategies.

Phylogenetic analysis detected circulation of >10 virus lineages, although the number of detected lineages could be underestimated because we did not sequence each positive case and there is a possibility of uncommon undetected lineages due to sample bias. Most of the lineages associated with imported cases (A.1, A.3, B, B.1, B.2.1) were detected and transmission controlled through active contact tracing. However, we detected early transmission of the lineage A.2.1/19B, which was introduced into the country >3 weeks before the first detected case. This lineage rapidly became widespread in Panama.

We conjecture that efforts to identify early suspected cases, which focused mainly in symptomatic travelers returning from China, precluded the opportunity to detect earlier cases imported from Europe and the United States, where the virus was already circulating at that time (11,14,15). Moreover, undetected early transmission occurring before control measures were implemented could help to explain the widespread distribution of SARS-CoV-2 across Panama.

Our findings on growth rates and Rt show that mitigation measures undertaken shortly after the first reported case in March helped to reduce virus transmission. Measures such as active contact tracing and isolation, social distancing, and quarantine targeted to regions where active transmission clusters are found will help to effectively control the spread of SARS-CoV-2 in Panama.

Mr. Franco is responsible for respiratory virus surveillance and SARS-CoV-2 molecular diagnosis in the Department of Research in Virology and Biotechnology at the Gorgas Memorial Institute of Health Studies in Panama. His research is focused on epidemiological and genetic analysis of respiratory viruses circulating in Panama.

We thank the Gorgas administration and general services for their support and extra work during the COVID-19 response. We also thank all the health institutions from MINSA, CSS, and private hospitals. We gratefully acknowledge the authors, originating and submitting laboratories of the sequences from GISAID’s EpiFlu Database on which this research is based Appendix 1 Table 2).

Page created: November 09, 2020
Page updated: January 23, 2021
Page reviewed: January 23, 2021
The conclusions, findings, and opinions expressed by authors contributing to this journal do not necessarily reflect the official position of the U.S. Department of Health and Human Services, the Public Health Service, the Centers for Disease Control and Prevention, or the authors' affiliated institutions. Use of trade names is for identification only and does not imply endorsement by any of the groups named above.