We discuss genomic detection of Schmallenberg virus in both Culicoides midges and affected ruminants during June 2018–December 2019, demonstrating its circulation in Israel. This region is a geographic bridge between 3 continents and may serve as an epidemiologic bridge for potential Schmallenberg virus spread into Asia.

Simbu serogroup viruses form one of the largest serogroups in the genus Orthobunyavirus of the family Peribunyaviridae, comprising >25 antigenically different, but serologically related, negative-sense single-stranded RNA viruses. These viruses are transmitted mainly by Culicoides biting midges; they persist in the environment by cycling between infected mammalian hosts and Culicoides vectors. Notable examples from the Simbu serogroup are Akabane virus (AKAV), Aino virus, Schmallenberg virus (SBV), Sathuperi virus (SATV), Shamonda virus (SHAV), Peaton virus (PEAV), and Shuni virus (SHUV, which is also suspected of infecting humans.). These viruses are known to cross the placenta of ruminants to the developing fetus, causing abortion, stillbirth, and neonatal malformations that are seen only at birth. The congenital malformations are termed arthrogryposis-hydranencephaly syndrome. Given that the clinical signs can be observed only months after viremia has occurred, field and laboratory practitioners are at a huge disadvantage when facing epidemics caused by these viruses (1–7).

Until recently, the most studied viruses of the Simbu serogroup were AKAV and Aino virus, both known to be present in Israel (1,3). In 2011, a new Simbu virus emerged in Europe and was named Schmallenberg virus (SBV) (8). Studies suggested that SBV is a reassortant virus, deriving the medium (M) RNA segment from SATV and the small (S) and large (L) RNA segments from SHAV, probably as a result of co-infection of these viruses in either Culicoides vectors or the ruminant hosts (1,9,10). 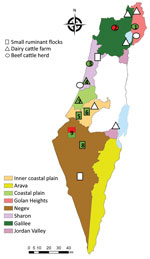 Once SBV emerged in Europe, it was clear to our team in Israel that this virus was either already present in Israel or would be introduced in the future. After AKAV and SHUV outbreaks (3,11) and virus neutralization test assays showing the additional presence of SATV, SHAV, and PEAV in Israel (12), a systematic monitoring system for arboviruses was established in 2015. Serum samples and vectors are collected every month from 13 selected dairy farms representing different geographic regions in Israel (Figure). Specific PEAV, SHUV, and SATV RNA fragments were also detected by nested quantitative PCR (qPCR) from different Culicoides species during 2015–2017 (13). Furthermore, in 2017, RNA fragments of a specific PEAV were detected in the cerebrospinal fluid (CSF) and testicles of a malformed calf exhibiting hydranencephaly (14). SBV was not found in all the studies conducted during 2011–2017, nor was it detected passively in Israel (3,11–14). We report the detection of SBV RNA in Israel in both vectors and affected ruminants.

In general, the most susceptible period for induction of congenital malformations by Simbu serogroup viruses is 65–70 days of gestation in lambs and 150 days of gestation in calves (1,7). Thus, SBV detection in the respective ruminants fits with viral infection in March–April 2019, suggesting exposure to SBV in Israel in early spring 2019. Nevertheless, reports on severe decline in progeny prolificacy, stillbirths, and malformed lambs were reported by farmers to the Veterinary Field Services from autumn 2018 through December 2019 (Table 2). The detection of SBV in Culicoides pools collected from several of those farms (Table 2, lines 3–5, 7–9, and 11–12 in the Sample column; Figure; Appendix Table) suggests that SBV might have been clinically affecting ruminants in Israel as early as June 2018.

Our results demonstrate the circulation of SBV outside Europe. Future studies are needed to determine the seroprevalence of SBV in the Middle East, because this information is essential for understanding the risk of SBV spread into countries in Asia. Because SATV is found in the Middle East (12,13), virus neutralization tests will probably not be able to properly distinguish between antibodies against SBV and those against SATV. Therefore, developing of a competitive ELISA system using SBV-specific antibodies is crucial. Finally, the presence of both SATV and SBV in Israel provides a unique opportunity for comparative studies on possible cross-protection of SBV commercial vaccines between these viruses.

Dr. Behar is a researcher working in the parasitology division of Kimron Veterinary Institute in Beit Dagan, Israel. She established and is running the arbovirus systematic monitoring system of the Israeli Veterinary Services. Her research interests include the interactions among bloodsucking insects, their microbiota, and the pathogens that they transmit.

Page created: June 09, 2021
Page updated: July 18, 2021
Page reviewed: July 18, 2021
The conclusions, findings, and opinions expressed by authors contributing to this journal do not necessarily reflect the official position of the U.S. Department of Health and Human Services, the Public Health Service, the Centers for Disease Control and Prevention, or the authors' affiliated institutions. Use of trade names is for identification only and does not imply endorsement by any of the groups named above.