Two consecutive cases of Haemophilus influenzae type a sequence type 23 invasive infection in 2 children attending the same daycare in 2019 triggered epidemiologic surveillance of H. influenzae infections in northern Spain. Despite the invasiveness potential of this bacterial strain, we detected no additional cases for 2013–2020.

Invasive infections caused by H. influenzae type a (Hia) are uncommon in Europe, particularly in Spain. However, Hia incidence is as high in other regions as among indigenous communities in North America (4) and as has emerged in Brazil during the 2000s (5). We describe 2 cases of Hia invasive disease in Gipuzkoa, northern Spain.

Both cases of Hia invasive disease occurred in children in a village with ≈15,000 inhabitants during November 2–3, 2019. The first patient, a 2-year-old boy, was admitted to the pediatric emergency department with good general aspect and persistent low-grade fever without a clear source. The child was not vaccinated according to the routine immunization schedule. Results for pulmonary auscultation and respiratory and cardiac rates were unremarkable, and a chest radiograph showed no abnormalities.

The second patient, a 19-month-old girl, was admitted to the pediatric emergency department with a nonproductive cough and a 39°C fever that was nonresponsive to antipyretics. The infant was vaccinated according to the routine immunization schedule, including Hib vaccination. No dyspnea was observed, and the chest radiograph showed pulmonary infiltrates suggesting pneumonia.

Both children showed increased C-reactive protein, procalcitonin, and white cell counts and had H. influenzae grown in the blood culture taken at admission. The boy was treated with ceftriaxone (50 mg/kg/12 h) for 5 days and the girl with ceftriaxone (50 mg/kg/12 h) for 4 days. Both children were discharged without symptoms or sequelae. Neither patient required additional antibiotic treatment after admission.

Both children attended the same daycare center, where no other children showed symptoms of infection. In Gipuzkoa, no additional cases of Hia invasive infection have been observed since 2013 (Table). However, 1 Hia was isolated 1 week later in the blood-culture of a 51-year-old patient in the adjacent province of Bizkaia. 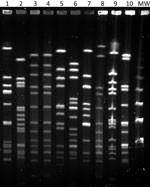 The isolates of both children were biotype II, serotype a, sequence type (ST) 23; showed an indistinguishable PFGE pattern; did not show the IS1016-bexA partial deletion; and were susceptible to ampicillin, azithromycin, and trimethoprim/sulfamethoxazole. The Hia that was isolated 1 week later in Bizkaia was similar to the 2 previous isolates of Gipuzkoa (biotype II, serotype a, not partial IS1016-bexA deletion) but was ST2053 (SLV of ST23) and had a closely related, but not identical, PFGE pattern.

Hia ST23 isolates have been described in different parts of the world, especially in Canada (4) and Brazil (5). In Europe, Hia ST23 has been found infrequently in Portugal (8) and recently in Italy (9). The H. influenzae multilocus sequence typing database (https://pubmlst.org/organisms/haemophilus-influenzae) lists only 29 ST23 isolates from the United States, Canada, Malaysia, France, and Spain (the 2 isolates in this article), most of them serotype a from invasive diseases.

Hia ST23 isolates from our region and from Canada did not show the virulence-enhancing IS1016-bexA partial deletion that has been more commonly associated with increased Hia virulence (10). However, isolates from our region only caused a mild and self-limiting infection, as compared with the severe disease observed among native North American Arctic populations that required intensive care unit admission and had notable sequelae (4).

As was the case in Italy, transmission of the highly virulent ST23 clone was substantially limited in Gipuzkoa. Although ST23 is a virulent Hia clone, its sustained spread appears to be limited, primarily among indigenous populations of North America. The origin of the isolates described in this article is unknown because Hia ST23 had not been previously described in Spain.

Ms. López-Olaizola is a clinical microbiologist in the bacteriology section, University Hospital Donostia. Her research focus on antimicrobial resistance and the epidemiology of infectious agents.

Page created: July 30, 2021
Page updated: August 18, 2021
Page reviewed: August 18, 2021
The conclusions, findings, and opinions expressed by authors contributing to this journal do not necessarily reflect the official position of the U.S. Department of Health and Human Services, the Public Health Service, the Centers for Disease Control and Prevention, or the authors' affiliated institutions. Use of trade names is for identification only and does not imply endorsement by any of the groups named above.