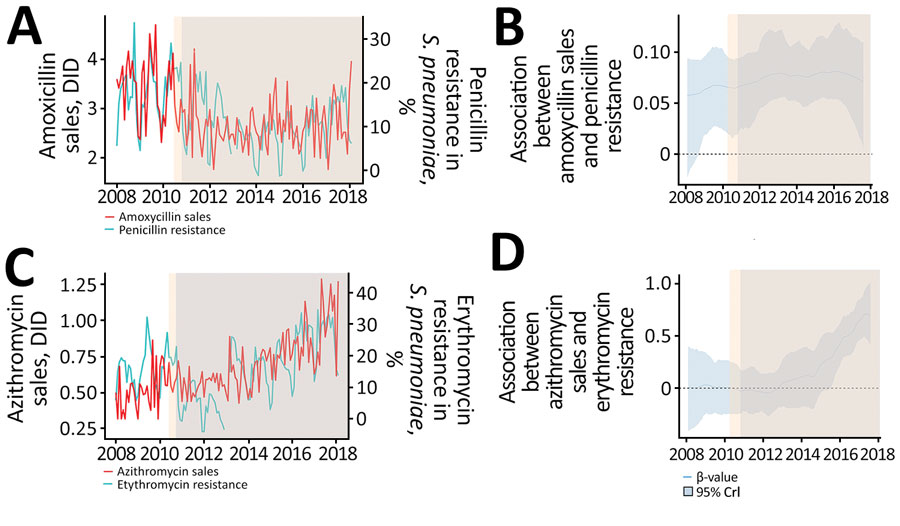 Figure 3. Descriptive analysis of the association between amoxicillin and azithromycin sales and Streptococcus pneumoniae resistance to penicillin and erythromycin in the São Paulo metropolitan area, Brazil, before and after a national policy restricting over-the-counter antimicrobial sales began. A, B) Amoxicillin sales and penicillin resistance; C, D) azithromycin sales and erythromycin resistance. Panels B and D show distribution of estimated β-values obtained from dynamic regression model. Estimated β-values and 95% CrI >0 suggest a direct association between sales and resistance before and after the restriction policy began. Penicillin resistance decreased after the restriction policy began (light blue shading areas) and after addition of free-of-charge PCV10 (orange shaded areas) to the national immunization program, and there was a direct association between sales of azithromycin and resistance to erythromycin 1 year after the restriction policy was put in place. CrI, credible interval; DID, defined daily dose/1,000 inhabitant-days; PCV10, 10-valent conjugated pneumococcal vaccine.

Page created: December 01, 2021
Page updated: December 20, 2021
Page reviewed: December 20, 2021
The conclusions, findings, and opinions expressed by authors contributing to this journal do not necessarily reflect the official position of the U.S. Department of Health and Human Services, the Public Health Service, the Centers for Disease Control and Prevention, or the authors' affiliated institutions. Use of trade names is for identification only and does not imply endorsement by any of the groups named above.