During 2017–2019, a total of 88/753 (11.7%) of patients 5–90 years of age in hospitals in Saravan Province, Laos, were seropositive for hepatitis C virus antibodies. Viral RNA was found in 44 samples. Sequencing showed high diversity within genotype 6. We recommend exposure-risk investigations and targeted testing and treatment.

Hepatitis C virus (HCV) infection carries high risk for progression to chronic status and liver complications, such as cirrhosis and cancer. Transmission usually occurs through blood (e.g., during medical procedures, blood transfusions, tattooing, or intravenous drug use). Because those who clear the virus remain HCV antibody positive, testing for viral RNA is essential for diagnosis of chronic infection (1).

We conducted a cross-sectional, hospital-based study during May 2017–March 2019 to determine seroprevalence and genotyping of HCV in Saravan Province in southern Laos. Saravan Province has a population of ≈400,000 distributed over 8 districts, 2 bordering Vietnam to the east and 2 bordering Thailand to the west. In 2017, only 8.5% of men and 6.9% of women had health insurance; 36.8% of the provincial population was in the poorest wealth index quartile; 17.8% of households had no electricity; and only 54.3% of men and 44.7% of women were literate, the lowest literacy rates in Laos (2). 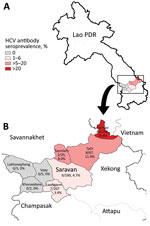 Whether the observed west–east increase in seroprevalence is related to the proximity of Samuoi district (24.4% anti-HCV seropositive) to the Vietnam border remains unclear (Figure; Appendix). Although HCV seroprevalence in Quang Tri, a bordering province in Vietnam, has been reported to be <1% (6), much higher rates were found in different groups at high risk in Vietnam, such as intravenous drug users (IDU) and men who have sex with men (MSM) (7). We could find no reported link between the Samuoi district population and the IDU or MSM communities in Vietnam, although this link remains possible.

Seroprevalence was significantly higher among the Pako ethnic group (66/265, 24.9% vs. 22/488, 4.5%; OR 5.1; p<0.001), which makes up most of the population in Samuoi district but not elsewhere. The Pako practice nonsterile teeth filing and lacquering during early adolescence with shared equipment and associated bleeding, although this practice is in decline. Pako do not often practice tattooing, but the women have ear piercings, which could be another source of infection. Other risk factors, such as blood transfusions and practices of MSM and IDU, are thought to be rare in this population, but nonsterile injection of traditional medicine might occur (8; A. Sernsarae, Samuoi District Health Office, pers. comm., 2020 Jul 23).

Only 44 of the samples we tested were positive for HCV RNA. The relatively low rate of chronic infection could indicate exposure early in life; persons infected at <25 years of age are thought to have much lower risk for chronic infection (1). A substantial proportion of children in our study were also infected, either by mother-to-child transmission or through the same routes as the adults in the study.

We obtained sequence data for 39 samples. All belonged to genotype 6 (Appendix). The sequence diversity does not suggest any recent large-scale transmission events, because no identical sequences were obtained, and the many genetically diverse clusters even in the same district (Samuoi) might indicate different infection sources. However, we cannot rule out a more distant large-scale transmission event. The new strains added to the genetic diversity of genotype 6 viruses found in a previous study from central and northern Laos provinces (5); this increased diversity has potential consequences for the use of commercial assays (9) and treatment strategies (10).

The high rates of death and illness associated with chronic HCV infection suggest that a large proportion of the Saravan population will experience liver-related complications in the future. Despite a reduction in costs of direct-acting antiviral drugs, access to testing and treatment remains low in Laos. An in-depth case-control study to determine sources of infection and associated risk factors is warranted. Furthermore, evaluations of infection prevention, screening, and control measures in healthcare facilities and blood banks, as well as the general population, are needed.

Dr. Black is the head of a research laboratory in the Institut Pasteur du Laos, Vientiane, Laos. His current research focuses on the immunology and public health burden of vaccine-preventable infectious diseases in Lao PDR.

We thank the participants for agreeing to take part in this study; Latdavone Khenkha, Bounta Vongphachanh, and Nouna Innoula for technical assistance in the laboratory; and Lisa Hefele for advising on the statistical analysis. We also thank Paul Brey and the administration of the Institut Pasteur du Laos for continued support and all staff at the provincial and district hospitals.

The work was supported by the Luxembourg Ministry of Foreign and European Affairs and the Luxembourg Institute of Health (PaReCIDS II grant), and the authors have full control over all primary data.

1These authors contributed equally to this manuscript.

Page created: November 01, 2021
Page updated: December 20, 2021
Page reviewed: December 20, 2021
The conclusions, findings, and opinions expressed by authors contributing to this journal do not necessarily reflect the official position of the U.S. Department of Health and Human Services, the Public Health Service, the Centers for Disease Control and Prevention, or the authors' affiliated institutions. Use of trade names is for identification only and does not imply endorsement by any of the groups named above.