A survey of intestinal helminths targeting 1,440 schoolchildren in 12 primary schools on Kome Island (Lake Victoria), Tanzania, revealed small trematode eggs in 19 children (1.3%), seemingly of a species of Haplorchis or Heterophyes. The eggs were molecularly confirmed to be Haplorchis pumilio on the basis of 18S and 28S rDNA sequences. 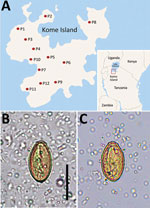 Haplorchis pumilio, a species of the zoonotic minute intestinal flukes belonging to the family Heterophyidae, was first discovered in the small intestines of birds and mammals in Egypt (1). Infection with this fluke also occurs in humans through the consumption of raw or improperly cooked fish harboring the metacercariae. Abdominal pain, diarrhea, lethargy, anorexia, malabsorption, and weight loss are the possible clinical symptoms (2). This fluke is widely distributed geographically from Africa to Asia, Australia, and the Americas (1). However, human infections were reported in only 5 countries in Africa and Asia: Egypt, China, Laos, Thailand, and Vietnam (1). We recently surveyed the prevalence of intestinal helminths among schoolchildren in 12 primary schools on Kome Island, Lake Victoria, Tanzania (Figure 1, panel A). We detected a low-grade prevalence of an apparent species of Haplorchis or Heterophyes by the recovery of eggs in fecal samples. We used molecular methods to confirm the eggs to be H. pumilio on the basis of 18S and 28S rDNA gene sequences.

An international collaborative project between South Korea and Tanzania named “Rapid assessment of schistosomiasis and soil-transmitted helminthiases on Kome Island, Buchosa District, northwestern Tanzania” was implemented during 2020–2022. This project was approved by the Ethics Committee of the Korea Association of Health Promotion, Seoul, South Korea (IRB no. 130750-202009-HR-019). Fecal examinations were performed on 1,440 schoolchildren in 12 primary schools by using the Kato-Katz thick smear technique.

We extracted DNA from 20 mg of the fecal sediment by using the DNeasy Tissue and Blood kit (QIAGEN, https://www.qiagen.com) after a modified formalin-ether concentration method in which formalin was replaced with water. The sediment was washed several times with distilled water. We performed PCR targeting the 18S and 28S rDNA of Haplorchis species using the primers we designed on the basis of the reported nucleotide sequences of Haplorchis and Heterophyes in GenBank (Table 1). We conducted PCR in a final volume of 20 µL using 5x PCR Premix (GenomicsOne, https://www.genomicsone.kr). The procedure included an initial denaturation at 94°C for 3 min, followed by 40 cycles of denaturation at 94°C for 30 s, annealing at 60°C for 30 s, extension at 72°C for 30 s, and final extension at 72°C for 5 min. The amplicons were electrophoresed in 2.0% agarose gel, and DNA sequencing was performed using the Sanger method (3) by Macrogen Inc. (https://www.macrogen.com). We aligned sequences of the amplicons and generated phylogenetic trees with the maximum-likelihood method in MEGA version 7.0 software (https://www.megasoftware.net) by using the Kimura 2-parameter model with 1,000 bootstrap replications.

Taxonomically, in the genus Haplorchis, a total of 9 species have been known to be valid (1). Among them, 4 species are recognized to be zoonotic: H. pumilio, H. taichui, H. yokogawai, and H. vanissimus (1). Natural human infection with H. pumilio flukes was first documented in Egypt in 1977 in a 9-year-old child passing diarrheic stools (4). A vital snail species for H. pumilio flukes is Melanoides tuberculata in Egypt, Taiwan, India, Peru, and Brazil (1,5). Their metacercariae are detected in various species of freshwater or brackish water fish, including Mugil sp., Tilapia sp., and Bagrus bayad (1,6).

In Africa, with the exception of Egypt (an H. pumilio fluke–endemic area), the distribution of H. pumilio flukes has been rarely reported. In Kenya, H. pumilio cercariae were confirmed molecularly recently in M. tuberculata snails; a high positive rate of 69.4% was found in the northernmost area of Lake Victoria, in Kenya (7). However, human H. pumilio infection in sub-Saharan Africa countries, including Kenya, has not been reported. In São Tomé and Principe, a sub-Sahara country off the west coast of Africa, eggs of Heterophyidae, which are very similar to Metagonimus yokogawai, were found in 28.2% of 1,050 human fecal samples in 1987, but their species could not be identified (8). Those eggs were 22.2–27.7 × 17.0–21.0 μm in size and had a thick wall and a difficult-to-see operculum (8); they were markedly different from the eggs of Haplorchis or Heterophyes spp (1). Of note, a zoonotic liver fluke species, Opisthorchis felineus, was found in dogs and cats in New Bussa, Nigeria (9); however, this species has never been found to distribute around Lake Victoria.

On the Lake Victoria basin, schistosomiasis and soil-transmitted helminthiases have been acknowledged as major public health problems (10), whereas intestinal fluke infections have been poorly studied. In this study, we detected a low-grade endemicity of H. pumilio infection on Kome Island, Lake Victoria, Tanzania. It remains unclear if human H. pumilio infection has been endemic on Kome Island unnoticed for a long time or was introduced recently. These 2 possibilities should be investigated.

Surveyed schoolchildren on Kome Island had no history of international travel, including to Asia, South America, Egypt, and Kenya, where the H. pumilio fluke is endemic. Therefore, the source of infection in our cases seems to be the fish host caught around Kome Island. In Lake Victoria, 3 fish species are known to predominate, and one of them is Nile tilapia (Oreochromis niloticus), which is a fish host for H. pumilio flukes (1,11,12). Nile tilapia is popularly eaten on Kome Island and is highly suggested as the source of infection in our cases. Studies are required to determine the existence of the life cycle of H. pumilio flukes on and around Kome Island and clarify the public health importance of H. pumilio infection in this area.

We thank the staff of the International Cooperation Department of the Korea Association of Health Promotion and Good Neighbors International for their help in this study. We are also grateful to the members of the National Institute of Medical Research, Mwanza, Tanzania, who helped with this study.

Page created: September 07, 2022
Page updated: October 24, 2022
Page reviewed: October 24, 2022
The conclusions, findings, and opinions expressed by authors contributing to this journal do not necessarily reflect the official position of the U.S. Department of Health and Human Services, the Public Health Service, the Centers for Disease Control and Prevention, or the authors' affiliated institutions. Use of trade names is for identification only and does not imply endorsement by any of the groups named above.