Human Parainfluenza Virus in Homeless Shelters before and during the COVID-19 Pandemic, Washington, USA

To determine the epidemiology of human parainfluenza virus in homeless shelters during the COVID-19 pandemic, we analyzed data and sequences from respiratory specimens collected in 23 shelters in Washington, USA, during 2019–2021. Two clusters in children were genetically similar by shelter of origin. Shelter-specific interventions are needed to reduce these infections.

We analyzed respiratory virus surveillance data from 2 previously described homeless shelter studies (3,4) conducted during October 2019‒May 2021. Eligible participants were residents at 1 of 23 homeless shelters who were >3 months of age and had a cough or >2 other acute respiratory illness symptoms. At enrollment, consenting participants or guardians completed questionnaires, and upper respiratory specimens were collected; each enrollment was considered 1 encounter. Once a month, persons were eligible to enroll, regardless of symptoms. Beginning April 1, 2020, enrollment expanded to residents and staff, regardless of symptoms. Participants could enroll multiple times; encounters were linked by name and birthdate. 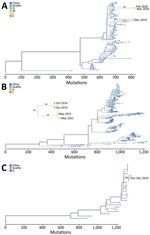 Respiratory viruses are increasingly appreciated as major pathogens in homeless shelters (5,6), We identified HPIV infections in shelter residents of all ages, although predominantly in children. Family shelters that have mixed populations of adults and children had the greatest percentage of HPIV detections. Two pediatric HPIV-3 clusters occurred before and during the COVID-19 pandemic with genetic clustering by shelter. After the Washington stay-at-home ordinance on March 23, 2020, overall numbers of HPIV infections decreased. These reductions (7) were probably in part caused by community implementation of NPIs because respiratory droplets are probably the main mode of HPIV transmission (8). However, HPIV has been detected on environmental surfaces (9), and shelter site resources might not enable adequate social distancing and air quality.

The University of Washington Institutional Review Board (study no. 00007800) approved this study.

This study was supported by Gates Ventures, the Centers for Disease Control and Prevention (research contract no. 75D30120C09322 AM002 to H.Y.C.), and the National Institute of Allergy and Infectious Diseases, National Institutes of Health (grant no. T32 AI007044 to E.J.C.).

E.J.C. reported honoraria from Providence Health and Services, Seattle, Washington, for presentations on COVID-19; S.N.C. reported honoraria from University of California, Berkeley, for presentations on COVID-19; A.L.G. reported contract testing for Abbott, Cepheid, Novavax, Pfizer, Janssen, and Hologic and research support from Gilead and Merck, outside of the submitted work; P.R. reported honoraria from The Bill and Melinda Gates Foundation for presentations on COVID-19; J.A.E. reported consulting with Sanofi Pasteur, AstraZeneca, and Meissa Vaccines, and has received research funding from AstraZeneca, GlaxoSmithKline, Merck, and Pfizer outside the submitted work; and H.Y.C. reported consulting with Ellume, Pfizer, The Bill and Melinda Gates Foundation, Glaxo Smith Kline, and Merck, has received research funding from Gates Ventures and Sanofi Pasteur, and support and reagents from Ellume and Cepheid outside of the submitted work.

Page created: September 02, 2022
Page updated: October 24, 2022
Page reviewed: October 24, 2022
The conclusions, findings, and opinions expressed by authors contributing to this journal do not necessarily reflect the official position of the U.S. Department of Health and Human Services, the Public Health Service, the Centers for Disease Control and Prevention, or the authors' affiliated institutions. Use of trade names is for identification only and does not imply endorsement by any of the groups named above.

Human Parainfluenza Virus in Homeless Shelters before and during the COVID-19 Pandemic, Washington, USA