We report the rapid emergence of severe acute respiratory syndrome coronavirus 2 lineages B.1.619 and B.1.620 in South Korea. The surge in frequency in a relatively short time emphasizes the need for ongoing monitoring for new lineages to track potential increases in transmissibility and disease severity and reductions in vaccine efficacy.

Since the emergence of coronavirus disease (COVID-19) in December 2019, ≈2 million genomes of SARS-CoV-2 have been sequenced worldwide, revealing that the virus is continuously mutating (1). The mutations of SARS-CoV-2 spike protein must be monitored because of its vital role in attaching to the host cell-surface receptor, angiotensin-converting enzyme 2 (ACE2) (2), which increases its infectivity (3).

As of May 31, 2021, the World Health Organization (WHO) reported the appearance of several variants of concern (VOCs) whose characteristics have serious implications on public health: Alpha (B.1.1.7), Beta (B.1.351), Gamma (P.1), and Delta (B.1.617.2) (4). These variants arose from changes in the spike protein, especially in the receptor-binding domain (RBD). The RBD plays an important role in direct interaction with human ACE2; the 4 variants contain >1 of the specific substitutions (K417N, L452R, T478K, E484K, and N501Y) that affect viral fitness and transmissibility. These variants possess substantially higher transmissibility, evade immunity, increase disease severity, reduce vaccine efficacy, and escape diagnostic detection (5). WHO designated Lambda (C.37) as a variant of interest (VOI) on June 14, 2021, and Mu (B.1.621) as a VOI on August 30, 2021. These variants were considered likely to become highly transmissible and evade vaccine protection, thus threatening South America, where they were first identified (Acevedo et al., unpub. data, https://doi.org/10.1101/2021.06.28.21259673) (6).

Genomic surveillance and open data sharing of viral genome sequences have enhanced near–real-time detection, comparison, and tracking of SARS-CoV-2 variants (1). The Korea Disease Control and Prevention Agency (KDCA) has been conducting whole-genome sequencing (WGS) of SARS-CoV-2 in South Korea since the beginning of the pandemic; targeted sequencing of the spike protein is being implemented to strengthen new variant monitoring. Lineage distribution analysis in South Korea indicated that, from its discovery in March 2020 until January 2021, the B.1.497 lineage was predominant in domestic cases (7,8). B.1.497 formed 1 of 4 major clusters in South Korea but was the only one that had expanded and predominantly circulated in the country (9). Sequence analysis indicated that it was originally clustered with North American viruses; additional genetic mutations in this cluster are H1113Y, T2408N, P4223S, and A5770S in open reading frame 1ab (ORF1ab) and Q52H, A222V, E556K, T716I, and A1070V in the spike protein. However, changes have been observed in lineage distribution since March 2021; increases in B.1.619 and B.1.620 are of note. We report the sudden emergence of these 2 lineages harboring the E484K mutation in the spike protein, which rapidly outcompeted the existing variants in South Korea. 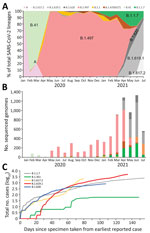 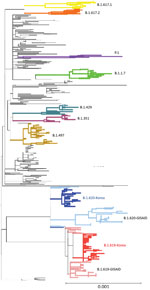 Figure 2. Phylogenetic analysis of severe acute respiratory syndrome coronavirus 2 sequences, South Korea. A total of 457 sequences were used to construct the tree, including 37 sequences of B.1.619 lineage and...

The B.1.619 and B.1.620 lineages have several characteristic spike protein mutations (Table 1); the E484K mutation, which is present in both Beta and Gamma variants and has been identified as an escape mutation (11), is the only shared mutation in both lineages. The mutations in the spike protein, specifically in the RBD, have a strong influence on SARS-CoV-2 pathogenesis; B.1.619 has additional N440K mutations in the RBD and B.1.620 has S447N substitutions. The S477N mutation may evade antibody-mediated immunity (12) and increase RBD affinity for ACE2 (13). In addition, the N440K mutation might confer resistance to monoclonal antibodies and enhance binding affinity to the ACE2 receptor (13,14). We observed no other specific mutation in the spike protein in B.1.619. In contrast, B.1.620 carries several mutations and deletions, previously observed individually in VOCs and VOIs (Table 1). The HV69/70Δ, Y144Δ, P681H, and D1118H mutations in the spike protein have been found in the Alpha variant, whereas the LAL242/243/244Δ mutation has been found in the Beta variant. Previously, we found that B.1.619 and 620 have no inhibitory effect on the neutralizing activity in vaccinated or convalescent persons (S.J. Oh et al., unpub. data). However, the combined effect of these mutations on viral pathogenicity and transmissibility needs to be elucidated.

Continuous monitoring of mutations is essential to track potential vaccine efficacy reduction, increased transmissibility, and disease severity. The transmissibility of B.1.619 and B.1.620 and their likelihood to cause more severe infections are not yet confirmed. Preliminary data show that patients who recovered from non-VOC/VOI and vaccinated persons have sufficient neutralizing capacity against these lineages (Table 2). The transmissibility and immune escape of these strains must be investigated further. Continuous genomic surveillance supporting public health response is required to overcome the COVID-19 pandemic.

Dr. Ae Kyung Park is a staff scientist at the Korea Disease Control and Prevention Agency. Her research interests include molecular epidemiology of pathogens, and next-generation sequencing.

This work was supported by a grant from the Korea Disease Control and Prevention Agency (grant no. 4800-4837-301).

Page created: December 16, 2021
Page updated: January 22, 2022
Page reviewed: January 22, 2022
The conclusions, findings, and opinions expressed by authors contributing to this journal do not necessarily reflect the official position of the U.S. Department of Health and Human Services, the Public Health Service, the Centers for Disease Control and Prevention, or the authors' affiliated institutions. Use of trade names is for identification only and does not imply endorsement by any of the groups named above.