We tested animals from wildlife trade sites in Laos for the presence of zoonotic pathogens. Leptospira spp. were the most frequently detected infectious agents, found in 20.1% of animals. Rickettsia typhi and R. felis were also detected. These findings suggest a substantial risk for exposure through handling and consumption of wild animal meat.

Consumption of wildlife meat drives emerging infectious diseases (1), often amplified by human encroachment into natural areas and changes in land use. Wildlife trade and consumption have been responsible for outbreaks of diseases such as HIV-1 (2), Ebola (3), and monkeypox (4) and possibly for the coronavirus disease pandemic (5). Wildlife markets bring diverse species into contact, usually in dense and unsanitary conditions, enabling mixing, amplification, and transmission of pathogens among species, including humans (6). Small mammals host diverse pathogenic bacteria and viruses (7), but little investigation of endemic bacteria transmission has occurred. Determining pathogens present in traded wildlife is vital to guide appropriate measures to combat zoonotic diseases and document societal and environmental costs of wildlife trade. 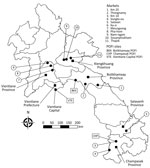 During December 2014–September 2017, we collected samples from 9 wildlife trade hotspots (8) and 2 roadside stalls (hereafter all referred to as trade sites) in Laos (Figure; Appendix Table 1). In addition, 3 Provincial Offices of Forest Inspection (POFI) collected samples from wildlife confiscated in markets by law enforcement. After identifying wildlife at trade sites (9), we asked vendors for permission to sample their animals. Depending on whether the animal was alive, dead, or butchered, we collected urogenital swabs, urine and blood samples, and kidney, liver, and spleen tissue samples (Appendix Table 2).

Zoonotic pathogens were nearly ubiquitous across sites; 10/11 sites yielded >1 pathogens. Squirrels are frequently traded in Lao markets (8) and had the greatest pathogen diversity in this study. Leptospira spp. was identified most frequently, found in 20.1% of animals (>45% in variable squirrels and common palm civets). Variable squirrels are commonly traded, often in batches of 2 to 3 squirrels (8); hence, on average, someone purchasing 3 variable squirrels would have an 83% likelihood of buying >1 infected squirrel (p = 1 – (1 – prevalence)3 = 1 – 0.553 = 0.83). The higher risk for Leptospira detection in the dry season is at odds with the typically described correlation of transmission with precipitation and flooding (10), suggesting that much remains to be understood of Leptospira ecology. Other studies have shown higher prevalence in rats (11), and although we are confident of the results from trade sites, storage of animals from POFI sites might have resulted in cross-contamination, which warrants cautious interpretation of results in this subset. Among Leptospira spp.-positive animals, detection was more likely in urogenital swab samples, highlighting the risk for transmission through infected urine (10). Although reservoir rodents are characterized by chronic renal infections, septicemia occurs during initial infection (10), and the high proportion of positive blood samples indicates a public health risk in relation to the consumption of uncooked or undercooked meat, organs, and blood. The PCR used to detect leptospires is specific for pathogenic and intermediate species (Appendix Table 3), but we could not confirm their human pathogenicity. The high volume of squirrel trade combined with high infection frequency suggests a high risk for exposure among wildlife consumers. Because leptospirosis is a key cause of fever in rural Laos (12), further work is needed to learn more about the relevance of contact with wildlife through trade and consumption.

The Rickettsiales species identified here are known to cause human infections in Laos (13). R. typhi causes murine typhus, a major underrecognized cause of fever (13). O. tsutsugamushi is responsible for up to 23% of fever (14), and although commonly associated with ground-dwelling rodents, the vectors (Leptotrombidium mites) parasitize squirrels (15), and O. tsutsugamushi has been isolated from Callosciurus notatus squirrels in Malaysia (16). Other bacteria identified are reviewed elsewhere (Appendix Table 6).

Although many of the human pathogens identified are transmitted by arthropod vectors, we found few arthropods in the wildlife sampled, probably because vectors leave animals quickly after animal death (17). Therefore, because most market vendors sell dead animals obtained from hunters or intermediaries (8), vendors are less likely to be exposed to disease vectors, and hunters are possibly at greater risk than market vendors or consumers. O. tsutsugamushi and R. typhi can cause infections through aerosol exposure, bites from infected animals, and needlestick injuries (18), but whether such routes of infection occur at trade sites is unclear. The frequent occurrence of Leptospira, which can be transmitted by direct contact with abraded skin and mucous membranes, may pose health risks to hunters, vendors, and consumers.

We thank the market managers and vendors for their participation and the Provincial Offices of Forest Inspection and Provincial Livestock and Fishery Section for their assistance. We also thank the Director and staff of Mahosot Hospital and the Microbiology Laboratory, the Wildlife Conservation Society Lao PDR Program, and the Minister of Health of the Lao PDR for their support. We are very grateful to the late Rattanaphone Phetsouvanh and Manivanh Vongsouvath and Mayfong Mayxay for their support for this work.

Study protocols were reviewed and authorized by the Wildlife Conservation Society’s Institutional Animal Care and Use Committee under permit 15:04, and by the National Animal Health Laboratory, Ministry of Agriculture and Forestry, Laos.

This study was funded by the European Union under the INNOVATE program and the LACANET project (DCIASIE/2013/315-151). This work was funded in whole or in part by the Wellcome Trust (grant number: 220211). M.T.R. and P.N.N. are funded by Wellcome.

6These authors contributed equally to this article.

Page created: February 06, 2022
Page updated: March 19, 2022
Page reviewed: March 19, 2022
The conclusions, findings, and opinions expressed by authors contributing to this journal do not necessarily reflect the official position of the U.S. Department of Health and Human Services, the Public Health Service, the Centers for Disease Control and Prevention, or the authors' affiliated institutions. Use of trade names is for identification only and does not imply endorsement by any of the groups named above.