We collected 1,671 Dermacentor reticulatus ticks from 17 locations in the Czech Republic, Slovakia, and Hungary. We found 47.9% overall prevalence of Rickettsia species in ticks over all locations. Sequence analysis confirmed that all tested samples belonged to R. raoultii, the causative agent of tick-borne lymphadenopathy.

The ornate dog tick, Dermacentor reticulatus, is a proven vector of pathogens of public health and veterinary importance, including tick-borne encephalitis virus, Omsk hemorrhagic fever virus, rickettsiae, Babesia spp., and several others (1). D. reticulatus ticks are now expanding into new areas of northern and central Europe (1), where a higher prevalence of associated diseases can be expected.

Although intensively studied during the past decade, bacteria of the genus Rickettsia have been overshadowed by other tickborne pathogens of primary medical importance. Rickettsiae of the typhus group and spotted fever group (SFG) present the greatest health risks. The D. reticulatus tick is a vector for SFG rickettsiae. Among Rickettsia species, R. raoultii and R. slovaca are recognized as causative agents of rickettsioses with typical lymphadenopathies, called tick-borne lymphadenopathy or Dermacentor-borne necrosis erythema and lymphadenopathy (2), which are widespread in Eurasia (1). R. helvetica, which causes milder symptoms, was also reported from D. reticulatus ticks (1,3).

We analyzed 1,671 D. reticulatus ticks (851 female and 820 male) for prevalence, diversity, and distribution of SFG rickettsiae in the Czech Republic, Slovakia, and Hungary. Ticks were collected by flagging for previous studies conducted during 2009–2020 from 7 locations in the Czech Republic, 7 in Slovakia, and 5 in Hungary (Appendix). We selected places with a high abundance of D. reticulatus ticks for analyses, to promote high detection probability (Table). We used a duplex quantitative PCR method aiming for gltA gene fragments of Rickettsia (147 bp). We calculated prevalence (Sterne’s exact method if n <1,000, adjusted Wald method if n >1,000) and basic statistical comparisons in Quantitative Parasitology 3.0 (4). We also amplified fragments of 2 outer-membrane protein genes, ompA (590 bp) and ompB (475 bp), by conventional PCR and selected a subset of 5–10 positive samples from each location (144 total) for sequencing (Macrogen, https://www.macrogen.com) and identifying species (Appendix). 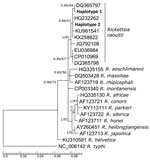 We identified all isolates as R. raoultii. Our ompA gene sequences were 99.83% identical to haplotypes from Italy (GenBank accession no. HM161792.1) and Denmark (accession no. MF166732.1). We used ompB gene sequences to create a phylogenetic tree (Figure; Appendix) in which both sequences were placed into a highly supported subclade formed by sequences of R. raoultii. We did not detect either R. slovaca or R. helvetica at the locations in the study, but the prevalence of these species in D. reticulatus ticks is generally low because the main vectors are D. marginatus ticks for R. slovaca and Ixodes ricinus ticks for R. helvetica (2,3).

The mean prevalence of Rickettsia in D. reticulatus ticks was 47.9% (95% CI 45.5%–50.3%), without significant difference between sexes (p = 0.307 by χ2 test). Remarkably, we observed the lowest prevalence (6.7%) in Ďulov Dvor, Slovakia, ≈3 km from Lándor, which had the highest prevalence (74.4%) (Table). Differences in the surrounding environments might account for this discrepancy: Ďulov Dvor by an oxbow lake in the middle of arable land and Lándor in a forest along the river Váh. We assumed more abundant interconnected populations of host animals with unrestricted movement live in the forest environment. Data from Lednice, Czech Republic, situated in the middle of farmland, indicated ≈20% prevalence, consistently lower than the ≈60% in nearby areas of floodplain forests along the Morava River near Mikulčice. Comparing findings from the earlier and newer sample collections showed that the proportion of positive ticks remained consistent and variability over time was not significant. Specifically, we compared samples from Lednice (2009 and 2020; p = 0.574 by χ2 test), Moravská Nová Ves (2009 and 2020; p = 0.178 by χ2 test), and Mikulčice (2009) and Hodonín (2020), ≈9 km apart (p = 0.739 by χ2 test).

Distribution of the pathogen in D. reticulatus tick populations seems to be very uneven in Central Europe, which is also suggested by other studies (5). Our overall prevalence of 47.9% corresponds with similar data showing the prevalence of R. raoultii in D. reticulatus ticks to be 56.7% in Germany, 57.8% in Hungary, and 50.2% and 45.6% in 2 locations in Slovakia (5–7). On the other hand, researchers also found much lower prevalences of 10.8% in Slovakia (8) 15.6% in the Czech Republic (3) and 14.9% in Austria (9). Although significant seasonal differences in prevalence were reported (10), our data showed that the high observed prevalence in the study locations remained consistent over a long time period.

Our data suggest an overall high prevalence of R. raoultii and its possible long-term stability in D. reticulatus tick populations in the studied region, highlighting the enduring high risk of acquiring this rickettsial infection. Besides veterinary consequences (1), this risk should be considered by medical personnel and public health authorities because the incidence of tick-borne lymphadenopathy might increase with the reported (1) expansion of the vector into new areas and its growing abundance in Central Europe.

Dr. Balážová is a junior scientist at Veterinary University in Brno, Czech Republic. Her research is aimed at vector-borne zoonotic diseases and the development of new molecular methods for pathogen detection.

We thank Michaela Kubelová, Markéta Rybářová, and Vojtech Baláž, who helped with collection and DNA isolations of part of the samples. Studied ticks originated from the collections of the authors.

Page created: January 12, 2022
Page updated: March 19, 2022
Page reviewed: March 19, 2022
The conclusions, findings, and opinions expressed by authors contributing to this journal do not necessarily reflect the official position of the U.S. Department of Health and Human Services, the Public Health Service, the Centers for Disease Control and Prevention, or the authors' affiliated institutions. Use of trade names is for identification only and does not imply endorsement by any of the groups named above.