We report detecting infectious Toscana virus in the seminal fluid of a 25-year-old man from Italy returning from Elba Island. The presence of infectious virus in human semen adds Toscana virus to the long list of viruses detected in this genital fluid and indicates a potential for sexual transmission.

Toscana virus (TOSV) is an arthropodborne virus, belonging to the genus Phlebovirus, that was first isolated in Monte Argentario in 1971 from the sand flies Phlebotomus perniciosus and P. perfiliewi (1,2). Some years later, TOSV was detected in the cerebrospinal fluid of 2 patients with meningitis (3,4), confirming its role in the etiology of this neurologic disorder. To date, phylogenetic analysis has distinguished 3 genotypes of TOSV (lineages A, B, and C), which are differentially distributed in the countries of the Mediterranean Basin (5). TOSV A is the most common cause of summer viral meningitis in central Italy and France and has a frequency eclipsing that of enteroviruses (6); lineage B is present in France and Spain, and lineage C is present in Croatia and Greece (7). Seroprevalence studies in TOSV-endemic regions indicate that most infections result in mild or self-limited febrile illnesses, whereas neurologic disorders develop in a small percentage of infected persons (6). We report the case of a young man with TOSV meningitis and prolonged persistence of TOSV in blood and semen.

On October 5, 2019, a 25-year-old man in otherwise healthy condition was admitted to the emergency department of Aurelia Hospital (Rome, Italy), for a history of acute headache, mental confusion, dysarthria, and high-grade fever since October 1. He had been living in Italy since January 27, 2019, after a 4-year period of residence in London, UK, where he abused alcohol and cocaine. During April 23–October 1, 2019, he worked as a waiter in a hotel on Elba Island, Tuscany, where he lived with his girlfriend. Their most recent sexual intercourse occurred on September 25. He reported several mosquito bites related to use of a shower located outside the hotel.

The patient was transferred to the intensive care unit of the National Institute for Infectious Diseases “Lazzaro Spallanzani” (INMI) in Rome in a state of psychomotor agitation. Orotracheal intubation was performed with mechanical ventilation because of worsening Glasgow Coma scale score (10). Empiric treatment with acyclovir, ceftriaxone, ampicillin, and steroids was started. Epidemiologic evaluation of the case (i.e., season and residence in a TOSV-endemic area) suggested the possibility of an arboviral disease. 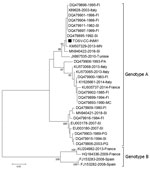 After clinical improvement, the patient was extubated on October 10; 2 days later, he was transferred to the high-isolation unit. Results of magnetic resonance imaging of the brain were unremarkable. The patient was discharged on October 19 in good clinical condition, and a 6-month follow-up examination did not reveal any sequelae.

After signing a written informed consent and upon INMI Ethical Board approval (issue: 14/2015), the patient was enrolled in a study on the tropism of arboviruses. To this purpose, every 7 or 14 days, and according to the patient’s willingness and ability to reach the INMI, we collected whole blood, serum, saliva, urine, and seminal fluid for viral RNA and specific antibody detection (Figure 2).

Serologic tests demonstrated the presence of both TOSV IgM and IgG from day 17 to the end of the follow-up period at day 107 after symptom onset (Table 1). Afterward, no more visits were scheduled because of the start of the coronavirus disease pandemic. Although TOSV RNA was never detected in serum, saliva, or urine, rRT-PCR results showed an unusual long-term persistence of low-level viremia for >3 months (Table 2).

Of note, viral RNA was detected in seminal fluid from day 17 until day 59 after symptom onset. Results of rRT-PCR on seminal cells demonstrated that TOSV RNA was associated with both spermatozoa and round cells fractions, separated by gradient at the time of collection (PureSperm 40/80; NidaCon International AB, https://www.nidacon.com) (Table 2).

To determine the potential for viral transmission from semen, we inoculated Vero cells (ATCC CCL-81) grown in cell vials with blood, seminal fluid, and seminal plasma collected at day 26 after symptom onset. We were able to isolate TOSV from seminal plasma when the culture showed a cytopathic effect at passage 3. We confirmed TOSV positivity by immunofluorescence on infected cells using anti-nucleocapsid protein serum (data not shown). We extracted total RNA from supernatant of infected cells and amplified the viral genome (8), then sequenced the full-length small and medium segment and part of the large segment by the Sanger method for molecular confirmation (accession nos. MZ643219 for small complete coding sequence [CDS], MZ643217 for medium complete CDS:, and MZ643218 for large partial CDS).

Most human TOSV infections are asymptomatic or appear as a nonspecific febrile disease. Neuroinvasive disease can occur, and, although self-resolving in most cases, TOSV infection of the central nervous system can be severe (9). In this study, we describe unusual long-term TOSV viremia and detection and persistence of TOSV in human semen. We could not recover infectious TOSV from blood samples, probably because of high levels of specific antibodies; the persistent low-level viremia could also derive from residual virus in the cellular components of blood.

We detected viral RNA in both acellular and cellular fractions of semen and isolated infectious TOSV from seminal plasma. Moreover, we detected the viral RNA in both spermatozoa and round seminal cells; both might include potential targets of TOSV infection. Nevertheless, the exact tropism for the genital tract and the origin of TOSV in semen remain to be elucidated. The patient reported no symptoms of genital inflammation, despite persistence of TOSV in genital secretions and the observation of sperm abnormalities (scarce mobility of spermatozoa was observed throughout the study period). To date, there have been few reports on genital involvement in men infected by TOSV; reported manifestations have included testicular pain, orchitis, and epididymitis (10–14). The finding of TOSV in human semen puts TOSV in the long list of viruses detected in this fluid (15), illuminating the potential for sexual transmission as an alternative route of viral spread. In this case, we did not find evidence of TOSV sexual transmission to the patient’s partner, whose serum, blood, saliva, urine, and vaginal fluid never tested positive for TOSV RNA. Moreover, despite the presence of specific IgM, we observed no IgG seroconversion during the 3-month follow-up. All these observations suggest tropism of TOSV for the male genital tract that warrants further investigation.

Page created: February 02, 2022
Page updated: March 19, 2022
Page reviewed: March 19, 2022
The conclusions, findings, and opinions expressed by authors contributing to this journal do not necessarily reflect the official position of the U.S. Department of Health and Human Services, the Public Health Service, the Centers for Disease Control and Prevention, or the authors' affiliated institutions. Use of trade names is for identification only and does not imply endorsement by any of the groups named above.