Influenza A viruses have a worldwide distribution, and wild birds are the primary wild reservoir. Many wild ducks in particular are often repeatedly exposed to and infected with these viruses (hereafter referred to as avian influenza viruses or AIV) with little to no sign of clinical disease (1), although highly pathogenic forms of the virus can sometimes cause illness and death in wild birds (2). Highly pathogenic lineage viruses identified in 1996 (A/goose/Guangdong/1/1996 [Gs/GD]) have repeatedly spilled over from poultry to wild birds, and eventual emergence of highly pathogenic AIV Gs/GD clade 2.3.4.4 has led to more persistent circulation of these viruses in wild birds and high numbers of illnesses and deaths in poultry on multiple continents (3).

One way to better understand AIV movement on the landscape or to identify routes of introduction of novel AIVs is through wild bird band-recovery data (4). These data have been collected as part of waterfowl management and conservation efforts in North America since the 1920s (5). Spatial locations of where birds are banded and later recovered are recorded and archived, providing data on wild bird movement. For waterfowl, recoveries primarily occur through banded birds being reported as part of hunter harvest activities.

Wild bird samples are routinely collected by the US Department of Agriculture, Animal Plant Health Inspection Service, Wildlife Services, National Wildlife Disease Program (National Wildlife Disease Program, US Fish and Wildlife Service permit no. MB124992 0) and screened for AIV in conjunction with the National Animal Health Laboratory Network and with the National Veterinary Services Laboratories (Ames, Iowa, USA) as part of a targeted AIV surveillance program in wild birds (6). Samples analyzed in this investigation came from routine wild bird surveillance activities in the US Atlantic Flyway and were primarily obtained from hunter harvest activities, live-trapping, and bird banding operations. These surveillance data, combined with bird band-recovery movement data, can shed light on AIV occurrence on the landscape, and findings in wild birds can act as an early warning system for spillover risk to poultry and humans (6). 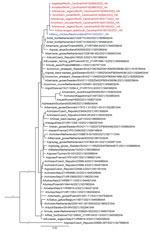 As part of these routine surveillance efforts, we detected Gs/GD lineage clade 2.3.4.4b H5N1 highly pathogenic AIVs in multiple wild birds sampled in North Carolina and South Carolina during December 2021 and January 2022 (Figure 1). Genetic analyses showed that all virus segments were of Eurasian origin (99.7%–99.8% similar; Appendix) and have high identity with December 2021 AIV H5N1 findings in Newfoundland, Canada (Figure 1) (9).

A sample was collected on December 30, 2021 from an American wigeon in Colleton County, South Carolina [A/American_wigeon/South_Carolina/AH0195145/2021(H5N1), GISAID accession no. EPI_ISL_9869760]. Immediately after this finding, there was an additional wild bird detection in South Carolina [A/blue-winged_teal/South_Carolina/AH0195150/2021(H5N1), GISAID accession no. EPI_ISL_9876777] and detections in neighboring North Carolina (Figure 1). Another 291 detections in wild birds occurred within 2 months, indicating high susceptibility to infection with a novel virus along with continued transmission and dispersal (Table). All birds were apparently healthy live-trapped or hunter-obtained dabbling ducks (Appendix Table). North American lineage AIV was not found in any of these samples.

Figure 2. Dabbling duck movements to and from North Carolina and South Carolina, USA, to and from other states or provinces in study of highly pathogenic avian influenza A(H5N1) 2.3.4.4 virus, United...

Although there has been intense focus on intercontinental movement of highly pathogenic AIV from Asia to the North American Pacific Flyway (10), viral movement by the trans-Atlantic pathway has been less clear (11). Data reported here, in combination with the recent highly pathogenic AIV findings in Newfoundland, Canada (9), suggest that wild bird surveillance captured the introduction of a Eurasian-origin highly pathogenic AIV into wild birds by the Atlantic Flyway of the United States. The potential introduction pathway probably includes wild bird migratory routes from northern Europe that overlap Arctic regions of North America and then dispersal farther south into Canada and the United States (12).

In addition, sequence data indicate that these viruses cluster closely with viruses found in Western Europe during spring of 2021 (Figure 1; Appendix). If viruses were exchanged between North American and Eurasian waterfowl on northern breeding grounds during spring and summer 2021, and then carried south during fall of 2021, these viruses might already be in multiple locations in North America (Figure 2). Because wild bird surveillance has recently been limited to the Atlantic and Pacific Flyways, introductions into the Central or Mississippi Flyways might have gone undetected. Additional detections in wild birds suggest these clade 2.3.4.4b H5 viruses continue to be transmitted (Appendix Table), and further dispersal might be seen once waterfowl migrate to summer breeding areas.

Some findings of highly pathogenic AIVs in wild birds have been associated with repeated spillover of the viruses from domestic birds, which are where mutations to high pathogenicity primarily occur; however, in some cases, Gs/GD lineage viruses now appear to be maintained in wild bird populations (14). This potential adaptation of highly pathogenic AIV to wild birds highlights the need for continued wild bird surveillance. In addition, these findings demonstrate that targeted AIV surveillance in wild bird populations can detect newly introduced or emergent AIVs before spillover to domestic poultry. Advanced warnings from wild bird surveillance enable poultry producers to consider altering biosecurity in the face of increased AIV risk and also help inform zoonotic disease potential (15).

Dr. Bevins is a research scientist at the US Department of Agriculture National Wildlife Research Center, Fort Collins, CO. Her primary research interest is pathogen emergence from wild animals.

We thank Wildlife Services employees and collaborators at state wildlife agencies for contributing wildlife sampling expertise, hunters for participating in this large-scale effort, and staff at state and federal agency laboratories and at the Canadian Food Inspection Agency for providing contributions to this study.

This study was supported by the US Department of Agriculture, Animal Plant Health Inspection Service.

Page created: March 10, 2022
Page updated: April 19, 2022
Page reviewed: April 19, 2022
The conclusions, findings, and opinions expressed by authors contributing to this journal do not necessarily reflect the official position of the U.S. Department of Health and Human Services, the Public Health Service, the Centers for Disease Control and Prevention, or the authors' affiliated institutions. Use of trade names is for identification only and does not imply endorsement by any of the groups named above.