We studied SARS-CoV-2 genomes from travelers arriving in Hong Kong during November 2021–February 2022. In addition to Omicron and Delta variants, we detected a BA.1/BA.2 recombinant with a breakpoint near the 5′ end of the spike gene in 2 epidemiologically linked case-patients. Continued surveillance for SARS-CoV-2 recombinants is needed.

The SARS-CoV-2 Omicron variant (Pango lineage B.1.1.529) emerged in November 2021. Within a few weeks, subvariants BA.1, BA.1.1, and BA.2 were detected in varying proportions on different continents, but BA.1 initially was dominant (1). By March 2022, these 3 subvariants accounted for >95% of sequences submitted to GISAID (https://www.gisaid.org). We previously demonstrated the feasibility of testing incoming travelers for SARS-CoV-2 genomic surveillance (2). We report detecting a BA.1/BA.2 recombinant SARS-CoV-2 subvariant in travelers arriving in Hong Kong, China.

In our phylogenetic analysis, 2 additional nearly identical sequences formed a distinct branch in the Omicron clade (Appendix Figure 2). We detected these sequences from 2 epidemiologically linked cases, patients 1 and 2, who were work colleagues and traveled together to Hong Kong on February 1, 2022, from Germany via the Netherlands. They tested SARS-CoV-2–positive by RT-PCR at the airport upon arrival (cycle thresholds 27 and 22). Patient 1 reported having a sore throat and cough since January 28, but patient 2 was asymptomatic. Both patients had received 2 doses of Pfizer-BioNTech COVID-19 vaccine (Pfizer Inc., https://www.pfizer.com); patient 1 received the second dose on November 1, 2021, and patient 2 received the second dose on June 22, 2021. 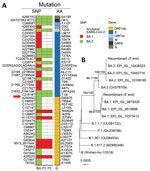 The distinct topology of viral sequences from these patients suggested that they were infected by a recombinant virus. To test that hypothesis, we used previously reported BA.1- and BA.2-defining single-nucleotide polymorphisms (SNPs) to analyze the genomes (Appendix). We found that the 5′ end sequences (nucleotide region 1–20055) from the 2 cases only contained BA.1-specific SNPs (Figure, panel A). By contrast, the corresponding 3′ end sequences only contained BA.2-specific SNPs. We further conducted a recombination analysis and confirmed that only 1 breakpoint was located within nucleotide positions 20055–21618 (Appendix Figure 3). The nucleotide 5′ end of the sequences is phylogenetically similar to authentic BA.1 and the 3′ end similar to BA.2 sequences at this breakpoint (Figure, panel B). The breakpoint identified in this recombinant virus is near the 5′ end open reading frame of the spike gene. Recombinant viruses, including B.1.1.7/B1.177 and Delta/BA.1, with a breakpoint in this region have been reported (3; P. Colson et al., unpub. data, https://www.medrxiv.org/content/10.1101/2022.03.03.22271812v2; T. Peacock, unpub. data, https://github.com/cov-lineages/pango-designation/issues/441).

We further examined our sequence data to exclude the possibility of coinfection or contamination (4). We noted that the minor allele frequencies at these BA.1- and BA.2-defining SNP positions were extremely low (mean 0.5%, median 0.06%) (Figure, panel A), indicating these samples contained only 1 virus population. We used the patient 2 sample to clone an RT-PCR product (≈2.2 kbp) spanning the recombination breakpoint. We detected BA.1-specific (19955C/20055A) and BA.2-specific (21618T/21633–21641del/21762C) SNPs in the same plasmid clone, confirming the 2 patients were infected by a BA.1/BA.2 recombinant virus.

We found no similar BA.1/BA.2 recombinant sequences in GISIAD or GenBank (as of March 7, 2022), suggesting a novel recombinant. The BA.1 region of this recombinant virus is genetically close to 3 BA.1 sequences detected in Europe and the United States (Figure, panel B), whereas its BA.2 region is identical to 19,555 BA.2 sequences from multiple continents. Because global cocirculation of BA.1 and BA.2 subvariants is high, pinpointing the geographic location where this recombination event occurred would be difficult.

Emerging Omicron subvariants could allow vaccine breakthrough and widespread reinfection. Previous studies reported detection of SARS-CoV-2 interlineage recombinants at the same time as different SARS-CoV-2 lineages were cocirculating (3; D. VanInsberghe et al., unpub. data, https://doi.org/10.1101/2020.08.05.238386; P. Colson et al., unpub. data; T. Peacock, unpub. data). The high transmissibility of Omicron (5,6) has led to wide cocirculation of BA.1 and BA.2 subvariants in many regions, which might provide ample opportunities to generate novel recombinants among these or other variants via coinfection events. Although current global surveillance data suggest that our recombinant might only be a sporadic case, the potential effects of novel recombinants should not be underestimated. Of note, homologous recombination is common in animal and other human coronaviruses (7), and some recombination events could generate recombinants with enhanced virulence (8,9). Long-term global SARS-CoV-2 genomic surveillance will be needed to monitor for possible more virulent or transmissible strains.

Dr. Gu is a postdoctoral fellow at The University of Hong Kong, Hong Kong, China. His research interests focus on bioinformatics and virus evolution.

We gratefully thank the staff from the originating laboratories for obtaining the specimens and from the submitting laboratories for generating genomic data and sharing via GISAID (Appendix Table 2). We thank colleagues from the Centre for PanorOmic Sciences of the University of Hong Kong for providing technical support. We also thank the Centre for Health Protection of the Department of Health for providing epidemiological data for the study.

This work is supported by Research Grants Council of Hong Kong theme-based research schemes (no. T11-705/21-N) and the Health and Medical Research Fund (no. COVID190205).

Page created: April 04, 2022
Page updated: May 22, 2022
Page reviewed: May 22, 2022
The conclusions, findings, and opinions expressed by authors contributing to this journal do not necessarily reflect the official position of the U.S. Department of Health and Human Services, the Public Health Service, the Centers for Disease Control and Prevention, or the authors' affiliated institutions. Use of trade names is for identification only and does not imply endorsement by any of the groups named above.