By applying cumulative sums (CUSUM), a quality control method commonly used in manufacturing, we constructed a process for detecting unusual clusters among reported laboratory isolates of disease-causing organisms. We developed a computer algorithm based on minimal adjustments to the CUSUM method, which cumulates sums of the differences between frequencies of isolates and their expected means; we used the algorithm to identify outbreaks of Salmonella Enteritidis isolates reported in 1993. By comparing these detected outbreaks with known reported outbreaks, we estimated the sensitivity, specificity, and false-positive rate of the method. Sensitivity by state in which the outbreak was reported was 0% (0/1) to 100%. Specificity was 64% to 100%, and the false-positive rate was 0 to 1.

Effective surveillance systems provide baseline information on incidence trends and geographic distribution of known infectious agents. The ability to provide such information is a prerequisite to detecting new or reemerging threats (1). Laboratory-based surveillance can provide data on the location and frequency of isolation of specific pathogens, which can be used to rapidly detect unusual increases or clusters. These data can be transmitted electronically from multiple public health sites to a central location for analysis.

Many acute outbreaks of infectious diseases are detected by astute clinical observers, local public health authorities, or the affected persons themselves. However, outbreaks dispersed over a broad geographic area, with relatively few cases in any one jurisdiction, are much more difficult to detect locally. Rapid analysis of data to detect unusual disease clusters is the first step in recognizing outbreaks. We developed an algorithm for the Public Health Laboratory Information System (PHLIS) (2) that detects unusual clusters by using a statistical quality control method called cumulative sums (CUSUM), a method commonly used in manufacturing. CUSUM has also been applied to medical audits of influenza surveillance in England and Wales (3,4).

The statistical problem of detecting unusual disease clusters in public health surveillance is similar to that of detecting clusters of defective items in manufacturing. In both cases, the aim is to detect an unusual number of occurrences. Manufacturing operations use several existing quality control methods, e.g., Shewhart Charts, moving average control, and CUSUM, to indicate abnormalities in data collected (5,6). Of these methods, CUSUM has two unique attributes that make it especially suitable for disease outbreak detection. CUSUM detects smaller shifts from the mean, and it detects similar shifts in the mean more quickly (6-8). The computational simplicity of this method also makes it especially well suited for use on personal computers. Other published methods (9-11) require more personal interactions, e.g., model building, and use more intense computations.

Applying the Algorithm to Surveillance Data

To evaluate how well the CUSUM algorithm detects unusual clusters of disease, we applied it to the Centers for Disease Control and Prevention (CDC) National Salmonella Surveillance System dataset. Since 1962, this surveillance system has collected reports of laboratory-confirmed Salmonella isolates from human sources from all U.S. state public health laboratories and the District of Columbia (12). The laboratories serotype clinical isolates of Salmonella by the Kauffman-White methods, which subdivide this diverse bacterial genus into more than 2,000 named serotypes (13). Each week, laboratories report to CDC each Salmonella strain they have serotyped, along with the age, sex, county of residence of the person from whom it was isolated, and date of specimen collection. The algorithm uses date of specimen collection, which we consider the nearest reliable date to the date the infection began. 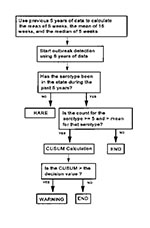 Figure 1. Algorithm for outbreak detection for one serotype for 1 week.a aSince we are interested in detecting only increases in the number of isolates of Salmonella serotypes, we based our algorithm on...

A one-sided CUSUM was calculated for every reported Salmonella serotype and week by using several values for the expected mean. Different expected means were used in the algorithm to identify which value accurately represented the historical data. First we calculated the mean of 5 weeks and the median of 5 weeks for each Salmonella serotype for the same week over the previous 5 years. We then calculated the mean of 15 weeks, which is the mean over a 3-week interval over the past 5 years. For example, for surveillance of the sixth week of 1993, we would use weeks 5 through 7 for each year from 1988 through 1992 to calculate the mean over a 3-week interval. The results of each calculation were compared to identify which value for the expected mean provided the best sensitivity, specificity, and false-positive rate. To minimize the time needed to process the outbreak detection algorithm for each reported serotype for each reported week, the algorithm was processed only for those Salmonella serotypes having a potential outbreak, an expected mean greater than zero, and counts greater than the expected mean (Figure 1). Since the entire algorithm is processed when the count for a given serotype exceeds the expected mean, the probability structure of CUSUM is not affected.

The outbreak detection algorithm was tested retrospectively to determine how well it discovered known outbreaks. To identify outbreaks, 52 weekly counts were calculated by serotype for each of the reporting sites over 5 years. The algorithm compared xt, the current weekly count of each Salmonella serotype reported to the National Salmonella Surveillance System, with summary information from the same week over the previous 5 years. The summary information includes Nt, the total number of each Salmonella serotype reported over the past 5 years for a given week, and the expected mean over the past 5 years for a serotype for a given week. Each week, except week 52, was defined to contain 7 days. The first week of each year included January 1 through January 7; the last week contained 9 days on a leap year and 8 days otherwise.

To detect any count above delta standard deviations from the mean, a CUSUM decision value, h, was set to ensure an appropriate average run length (ARL). The values h=0.5, k=1, and delta=0.5 yielded an ARL=6 years. This ARL allowed consideration of 5 past years of counts and the count for the current year before the CUSUM signals become out of control (15,16).

A rare or uncommon serotype, i.e., a serotype that had not been reported from a state during the past 5 years, was flagged immediately as a serotype of interest. We compared flags generated by the algorithm by state and week with occurrences of reported outbreaks. We considered the sensitivity, specificity, and false-positive rate for three outbreak sizes: 1) any isolates, 2) at least three isolates, and 3) at least five isolates. Data were limited to reports during 1993 and, because we had information about previously reported outbreaks involving this serotype, CDC's Salmonella serotype Enteritidis (SE) Outbreak Surveillance System (17). Sensitivity was calculated as the number of outbreaks flagged by the algorithm that matched SE outbreaks reported to CDC by state and by week. Because an outbreak could have received several flags corresponding to different weeks, flags in consecutive weeks were counted as both being correct. Specificity was defined as the number of weeks without flags that corresponded to weeks without reported outbreaks. The false-positive rate was defined as the proportion of flags that did not correspond to outbreaks.

Results of the Test

An Assessment of the Algorithm

The sensitivity, specificity, and false-positive rate results indicate that the algorithm works well. However, there are several potential limitations to calculating sensitivity, specificity, and the false-positive rate as we did. Some of these include outbreak size, lack of reporting of isolates, duplicate isolate reports, and under-reporting of outbreaks. Constraints on public health resources may limit investigation of small outbreaks of SE. Therefore, we did not include these in the calculation of sensitivity. Under-reporting of isolates could cause the algorithm to miss an outbreak, regardless of its size. Under-reporting of known SE outbreaks could also inflate our estimates of specificity.

An outbreak detection algorithm must have high specificity (i.e., few false flags). The algorithm can be adjusted to achieve better specificity, which would benefit state health departments that may choose to investigate small clusters.

Seasonal shifts in the incidence of Salmonella can interfere with the sensitivity of the outbreak detection algorithm. In our study, we examined only unusual clusters of Salmonella that were above the normal seasonal patterns. Thus, we may have missed smaller outbreaks that were obscured by seasonality. For example, we could have overlooked an outbreak of three cases if it occurred in a season with a high background number of reported cases.

The ability of the algorithm to detect outbreaks rapidly is also affected by the speed with which serotyping is done and the results reported by state public health laboratories.

In early spring 1995, we implemented the algorithm on a weekly basis, looking for unusual clusters at the state, regional, and national levels among Salmonella isolate data reported each week from state public health laboratories to CDC. An international outbreak of Salmonella serotype Stanley was flagged in May 1995 (Figure 2). S. Stanley is an unusual serotype in the United States, with only 219 cases reported in 1994. The ensuing epidemiologic investigation implicated alfalfa sprouts as the vehicle of infection (18). Rapid detection of this outbreak concluded in identification of a new vehicle of salmonellosis and prompted development of prevention measures.