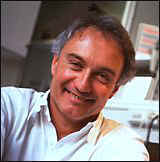 Dr. Aubry-Damon is a microbiologist specializing in antimicrobial resistance at the National Institute for Public Health Surveillance, Saint-Maurice, France. The institute has recently carried out an exploratory study of a national program for surveillance of antimicrobial resistance in France. Dr. Aubry-Damon also collaborates closely with the French National Reference Center for Antibiotics (No photo available). Dr. Courvalin is professor at the Institut Pasteur, where he directs the French National Reference Center for Antibiotics and heads the Antibacterial Agents Unit. Dr. Courvalin specializes in the genetics and biochemistry of antibiotic resistance. His research has led to revision of the description of the natural dissemination of antibiotic resistance genes. His laboratory demonstrated that pathogenic bacteria can promiscuously exchange genetic material conferring antibiotic resistance, documented that conjugation could account for dissemination of resistance determinants between phylogenetically remote bacterial genera, elucidated the transposition mechanism of conjugative transposons from gram-positive cocci, and recently, obtained direct gene transfer from bacteria to mammalian cells.

Surveillance of antibiotic resistance in human pathogens has long been performed in France. Existing surveillance relies on national reference centers dedicated to various bacterial genera and on networks of volunteer medical microbiologists, mainly in general hospitals but also in private laboratories. Regional data (often initiated at the request of and funded by the pharmaceutical industry) have been available since the early 1950s. Because of the major health problems caused by antibiotic resistance in the last few years, attempts have been made to organize a national surveillance program similar to those being established in other European countries. Although this update reviews recent data from France, the representativeness of the data has not been assessed. In addition, these are raw data, and their clinical importance remains to be seen; for example, the contribution of bacterial isolates to infection or colonization is, in most instances, unknown.

Evolution of Antibiotic Resistance in Hospitals

Dissemination of ß-Lactamases in Gram-Negative Bacilli

In France, ß-lactamases and fluoroquinolones are the most frequently prescribed antibiotics in Enterobacteriaceae infections. A multicenter study (14 hospitals) across the country analyzed the antibiotic susceptibility of 2,507 and 2,312 consecutive, nonrepetitive enterobacteria responsible for infection in 1996 and 1997, respectively (1,2). Strains were isolated from inpatients (86%) in intensive care (ICU) (12%), surgical (17%), medical (37%), and geriatric (9%) units. The majority of isolates were from urine (71%), pus (9%), and bronchopulmonary specimens (8%). Escherichia coli (64%) was isolated most frequently, mainly in outpatients, whereas Klebsiella spp. and Enterobacteriaceae with inducible ß-lactamases predominated in ICUs. Resistance of E. coli to amoxicillin and cefotaxime was 47% and 0.5%, respectively. In 1997, the frequency of isolates producing an extended-spectrum ß-lactamase varied by species: in Enterobacter aerogenes, 56%; in Klebsiella pneumoniae, 15%; and in E. coli, 0.5%. The incidence differed within and between hospitals. Such strains arise in response to the selective pressure exerted by use of extended-spectrum cephalosporins (3); infections with such strains have also been associated with hospitalization in ICUs. Production of ß-lactamases resistant to ß-lactam-enzyme inhibitor combinations in E. coli was approximately 3.5% (2). Susceptibility to fluoroquinolones was high (66%-97% ciprofloxacin-susceptible) except in E. aerogenes and Serratia marcescens (35%-52% ciprofloxacin-susceptible) (1).

The organisms most frequently isolated in ICUs in 1995 belonged to the family Enterobacteriaceae (59%) and Pseudomonas aeruginosa (25%) (4). In 1997, 1,362 nonrepetitive P. aeruginosa (5% of all clinical isolates) were collected in 13 teaching hospitals (5). The lowest rates of susceptibility to ceftazidime (<75%), amikacin (70%), and ciprofloxacin (65%) were observed with serotype 12 (the fourth main serotype). Among penicillinase-producing strains, the percentages of resistance to amikacin and ciprofloxacin were 80% and 93%, respectively; these figures were substantially higher in ß-lactam-resistant P. aeruginosa than in susceptible strains.

Methicillin-resistant S. aureus (MRSA) is one of the most frequent nosocomial pathogens in France as in the rest of the world. Surveys conducted in hospitals in Paris and surroundings found that MRSA decreased from 42% in 1992 to 37% in 1997 and that the incidence of MRSA colonization-infection (approximately 0.65 per 100 admissions) also decreased after national recommendations against dissemination of multidrug-resistant bacteria were implemented (6,7). However, a survey of 26 geographically representative hospitals found that the incidence of gentamicin-susceptible MRSA progressively increased because of the presence of a predominant clone (H. Lelièvre, G. Lina, M.E. Jones, et al., unpub. obs.). The epidemiologic situation in France is complex. The endemic aminoglycoside-resistant MRSA strain persisted while new clones became endemic in hospitals, perhaps after changes in the use of aminoglycosides (decrease of gentamicin and increase of amikacin consumption) (8). The first vancomycin-intermediate S. aureus was isolated in a French hospital in 1995; no other cases of MRSA with reduced susceptibility to vancomycin have been reported (9).

Most Frequent Macrolide-Resistance Mechanisms among Staphylococci

Dissemination of Resistance in the Community

Effect of Antibiotics on Oropharyngeal Flora

The National Reference Center for Pneumococci determined the susceptibility to antibiotics of 2,837 S. pneumoniae isolated in 1997. The incidence of S. pneumoniae with reduced susceptibility to penicillin G increased from 3.8% in 1987 to 48% in 1997 (12). Whereas 53% of all strains were resistant to macrolides, 80% of penicillin-resistant strains were macrolide-resistant; 15% of all strains (versus 51% of penicillin-resistant strains) were resistant to tetracycline, and 10% (versus 66%), respectively, were resistant to trimethoprim-sulfamethoxazole (F. Goldstein et al., unpub. data). According to a 1997 survey of 18 regional laboratories in France (11,757 strains collected), 27% had intermediate levels of resistance to penicillin G, and 13.5% were fully resistant. The rates varied considerably by region (highest in southwest and central France), age (highest [37.4% penicillin G-intermediate and 21.5% resistant] in children <16 years old), and specimen source (highest in middle ear and sinus specimens) (13).

Resistance to Macrolides in ß-Hemolytic Streptococci

In 1995, a national survey in 98 hospitals of invasive infections due to Streptococcus pyogenes found that 5.2% to 9.8% of the strains isolated from blood were erythromycin-resistant (A. Bouvet, pers. comm.) (14).

Vaccination against and Resistance in Haemophilus influenzae Type b

To monitor the trends in H. influenzae meningitidis and the prevalence of resistance, the National Reference Center conducted a survey of approximately 80 hospitals (15). Since vaccination for Hib invasive infections began in 1993, the percentage of capsulated isolates has decreased 5% per year. Moreover, resistance to antimicrobial drugs decreased among Hib and increased among noncapsulated strains isolated from upper and lower respiratory tract infections. The percentage of ß-lactamase-producing H. influenzae increased progressively from 22% in 1992 to 35% in 1997, with a similar evolution for kanamycin resistance. Tetracycline and chloramphenicol resistance remained stable in 1997—less than 10% and 2%, respectively (15,16).

Meningococcal resistance to antibiotics is emerging in France. The incidence of N. meningitidis with reduced susceptibility to penicillin G (MICs from 0.125 mg/L to 1 mg/L) increased from less than 1% in 1991 to 18% in 1996 (17,18). The strains belonged to various serogroups; most belonged to serogroup B, none produced a ß-lactamase, and all were susceptible to cefotaxime and ceftriaxone. Resistance to rifampin, used for prophylaxis of secondary cases in France, remained low (0.02% in 1996).

Effect of Antibiotics on Digestive Flora

The evolution of antimicrobial resistance in Campylobacter jejuni and C. coli is worrisome. Between 1986 and 1997, 2,713 strains of C. jejuni (68% of total Campylobacter isolates) were isolated from stool (94%) and blood (4%) and studied (20). Between 1993 and 1997, fluoroquinolone resistance increased from 7.4% to 32% in C. jejuni and from 11.8% to 52% in C. coli. The high resistance rate to quinolones makes them ineffective in therapy of Campylobacter infections. These resistance rates are similar to those in other countries (e.g., Spain, the United Kingdom) (21,22). However, the prevalence of macrolide-resistant strains remains low (3.6%). The high incidence of multidrug-resistant Salmonella Typhimurium DT104 (12 atypical), with 82% resistance to ampicillin, streptomycin, sulphonamide, tetracycline, and chloramphenicol, is the most serious epidemiologic problem of the last decade in France (23). The incidence of Salmonella Hadar is increasing, and the percentages of amoxicillin- and fluoroquinolone-resistant strains in 1997 were 72% and 75%, respectively. Fluoroquinolone resistance had not been observed before 1987 in France, Spain, and the United Kingdom. This was before concomitant introduction of ciprofloxacin into clinical use and enrofloxacin into veterinary use (in particular in the poultry industry) in the late 1980s. More than 50% of C. jejuni and S. Hadar, the most frequent serotype associated with poultry, are now fluoroquinolone-resistant in these countries. The situation is different in Sweden, where fluoroquinolones are not readily available. Therefore, guidelines for the prudent use of antibiotics (in prophylaxis or therapy) should be developed that respect the indigenous flora of humans and animals.

New Types of Resistance in Enterococci

The increase in the incidence of glycopeptide-resistant enterococci (GRE) isolated from hospitalized patients throughout the United States has not been observed in France. A multicenter study in 1993 showed a very low incidence of GRE: 0.2% among 251 enterococcal clinical isolates and 7.5% among Enterococcus faecium (24). Study of 24 ICUs in 1994 determined that the prevalence of GRE colonization in patients' fecal flora was approximately 2%, 30% of which had been present at admission. No nosocomial infection due to GRE was observed (25). GRE have been identified in human food of animal origin (40% of GRE were isolated from uncooked meat) in a French study conducted in military cafeterias in 1997 (26). Thus, food may represent a major source of human colonization with GRE in France. GRE strains isolated in France were also resistant to ampicillin, tetracycline, and macrolides. However, the percentage of high resistance levels to gentamicin among GRE was comparable to that among glycopeptide-susceptible enterococci.

Studies of antibiotic resistance in anaerobic pathogens indicate stability of resistance to carbapenems (imipenem) and nitroimidazole antibiotics (27,28). In 1998, fewer than 2% of all B. fragilis from 39 hospitals were resistant to metronidazole (MICs >8 mg/L), and the number of imipenem-resistant strains remained low. However, this gene reservoir requires surveillance of resistance in B. fragilis infections because of the use of these antibiotics in therapy.

The number of N. gonorrhoeae strains identified by the National Reference Centre for Sexually Transmitted Diseases fell sharply from 1986 to 1990 (by 81%) and more slowly from 1990 until 1999 (by 55%) (29). The number of anorectal gonococcal infections reached a plateau from 1995 to 1997 but increased again in 1998, mostly in the Paris/Ile-de-France region (V. Goulet, P. Sednaoui, et al., unpub. data). An increasing percentage of N. gonorrhoeae displayed diminished sensitivity to penicillin G and to tetracycline. In 1997, 15% and 30% of N. gonorrhoeae were resistant to penicillin G (MIC > 2 mg/L) and tetracycline (MIC 2 > mg/L and < 16 mg/L), respectively, by chromosomal mutation. In contrast, the percentage of strains with plasmid-mediated resistance to penicillins and tetracycline has remained stable at approximately 15% since 1994. No ceftriaxone, spectinomycin, or ciprofloxacin resistance was found until 1997, when the first ciprofloxacin-resistant strains (MIC=1 mg/L) were isolated.

Antibiotic resistance trends in France are for the most part similar to trends in other European countries but with some peculiarities. For instance, fluoroquinolone resistance in Salmonella spp. and Campylobacter spp. is a problem throughout Europe. However, methicillin resistance in Staphylococcus is more common in France than in the Scandinavian countries, although it has started to decrease because of reinforcement of hygiene measures since 1992. Also, heavy use of 16-membered macrolides has selected for resistance in gram-positive cocci by ribosomal modification rather than by efflux. In pneumococci, decreased susceptibility to penicillins is as common in France as in Spain, but the incidence of resistance to macrolides is the highest in Europe. The public health problems caused in France by bacterial resistance to antibiotics are clearly distinct from those in North America. The incidence of enterobacteria producing extended-spectrum ß-lactamases and glycopeptide-resistant enterococci remains rather low in France, as in most other European countries. In the United States, the high incidence of nosocomial GRE infections is probably caused by the heavy nosocomial use of vancomycin, particularly in hematology wards and for the prevention of colitis due to Clostridium difficile. In contrast, no intestinal carriage of such strains is found in the general population. The situation in Europe mirrors that in the United States. In Europe, the prevalence of nosocomial GRE infections remains low, but colonization of the population is substantial, possibly because of the use of a vancomycinlike antibiotic (avoparcin) as an animal food additive. This example stresses the need for a multidisciplinary approach to surveillance of bacterial resistance to antibiotics.