Protozoan apicomplexan parasites from the genus Cryptosporidium infect a wide variety of hosts (1). The parasites are transmitted to humans through contaminated drinking water (2), contact with infected animals, and contact with infected persons (3). In the immunocompetent, cryptosporidiosis manifests itself as self-limited diarrhea, sometimes accompanied by nausea, abdominal cramps, fever, and vomiting. In the immunodeficient, however, cryptosporidiosis may be severe, chronic, and life-threatening (4).

Cross-infection experiments, in which Cryptosporidium oocysts were obtained from animals of one species and fed to animals of another species, have investigated the host specificity of this parasite (5). The differences observed in the host range of putative C. parvum isolates led to a proposal to establish the Cryptosporidium isolate originating from guinea pigs, morphologically indistinguishable from C. parvum, as a new species—C. wrairi—solely on the basis of experimental infection (6). The possibility of many Cryptosporidium species fostered the development of techniques suitable for typing isolates. Commonly used techniques are isoenzyme analysis (7), Western blotting (8,9), random amplified polymorphic DNA analysis (10-12), polymerase chain reaction restriction fragment length polymorphism (PCR-RFLP) analysis (13,14), and PCR followed by DNA sequencing (11,15-19).

Early studies of the polymorphism of isolates classified as C. parvum found significant geographic variation among isolates (20) in the region coding for the small subunit ribosomal RNA (SSU-rRNA), commonly used for taxonomic classification. Recently, it has been shown (21) that one of the sequences used in this analysis (22) was erroneously identified as a C. parvum sequence, while in fact it was C. muris. More recent work (e.g., Le Blancq et al. [23] and GenBank entry AF040725) has shown that the SSU-rRNA region of the C. parvum zoonotic (bovine) genotype does not show heterogeneity and is practically identical to the sequence submitted to GenBank in 1993 (accession number L16996, [24,25]).

Recently, consistent results of typing bovine and human C. parvum isolates led to unequivocal recognition of two genotypes of C. parvum. These two genotypes were reproducibly differentiated by sequencing the SSU-rRNA coding region (16), sequencing the Cryptosporidium thrombospondin-related adhesion protein (TRAP-C2) gene (17), and PCR-RFLP analysis of the Cryptosporidium oocyst wall protein (COWP) gene (15). Thus far, the anthroponotic genotype (genotype 1) has been found only in infected humans, while the zoonotic genotype (genotype 2) has been found both in infected humans and in livestock, e.g., cows, lambs, goats, and horses. The published partial SSU-rRNA sequence of the C. parvum genotype 1 (16) is identical to the Cryptosporidium SSU-rRNA sequence that we observed in PCR-amplified DNA from a patient with AIDS (GenBank accession number L16997). That the data from different laboratories for these two genotypes were reproducible calls into question the recent conclusion of Tzipori and Griffiths (26) that "there are no clearly defined and fully characterized reference `strains' of Cryptosporidium."

Other new Cryptosporidium genotypes have been identified in various animals (pigs, mice, cats, and koalas) by sequencing the region coding for SSU-rRNA (16,27,28). The cat genotype is thought to represent C. felis (28). When morphologic and other data are available for these new genotypes, they may be recognized as new Cryptosporidium species.

We present results of typing Cryptosporidium isolates by direct sequencing the variable region of the SSU-rRNA amplified from fecal specimens with Cryptosporidium genus-specific diagnostic PCR primers (25). Applying this method to a set of specimens from a 3-year longitudinal study on the risk for enteric parasitosis and chronic diarrhea in immunodeficient patients with a low CD4+ count, we found the first human cases of infection by C. felis and by a newly identified zoonotic Cryptosporidium species possibly originating from a dog.

All analyzed specimens were collected from January 1991 through September 1994 in a study assessing the impact of enteric parasite-associated diarrhea in persons infected with HIV (29). Study participants answered comprehensive questionnaires concerning clinical and epidemiologic information and provided stool specimens monthly. All stool specimens were examined for C. parvum by Kinyoun carbol-fuchsin modified acid-fast stain (30) and direct immunofluorescence (31). Stained slides were examined by observing 200 oil-immersion fields. C. parvum was associated with 18 (5.1%) of the 354 acute episodes and 36 (12.9%) of the chronic episodes of diarrhea reported by the participants. All specimens from this study were preserved in separate vials of 10% formalin and polyvinyl alcohol (Para-Pak Stool System; Meridian Diagnostics, Inc., Cincinnati, OH) and thus were not suitable for molecular analysis. Some specimens were originally aliquoted and stored without preservation at -80°C. Of this set, we selected 18 available specimens for 10 randomly chosen Cryptosporidium-positive patients for this study.

An aliquot of approximately 300 µl of each stool specimen was suspended in 1 ml of 0.01 M phosphate-buffered saline, pH 7.2, containing 0.01 M of EDTA (PBS-EDTA), and the suspension was centrifuged at 14,000 x g, 4°C for 5 minutes. The pellet from this centrifugation was washed two more times under the same conditions. The pellet was resuspended in 300 µl of PBS-EDTA and used for DNA extraction, performed with the FastPrep disrupter and the FastDNA kit (BIO 101, Inc., Vista, CA) (32). Extracted DNA was stored at 4°C until PCR amplification.

Cryptosporidium genus-specific primers (CPBDIAGF and CPBDIAGR) were used to amplify the Cryptosporidium SSU-rRNA variable region (24,25). The conditions for PCR were 95°C for 15 minutes; 45 cycles of denaturation at 94°C for 30 seconds, annealing at 65°C for 30 seconds, extension at 72°C for 1 minute, 30 seconds; followed by extension at 72°C for 9 minutes; and finished with a hold step at 4°C. 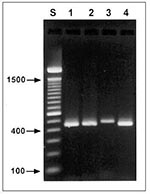 After the 18 fecal specimens were retrieved from storage and processed for PCR with the CPBDIAGF/CPBDIAGR diagnostic primer set, visualization of PCR products on 2% agarose gels found two different sizes of diagnostic bands. The size of the Cryptosporidium diagnostic bands for patients 53, 75, 119, 124, 153, 278, and 554 did not differ significantly from the size of the standard band (approximately 435 bp) obtained with cloned SSU-rRNA for the C. parvum genotype 2 (Figure 1, lane 1). On the other hand, the Cryptosporidium diagnostic bands in samples from patients 84, 184, and 485 were visibly larger, approximately 450 bp (Figure 1, lane 3 shows data for patient 84).

Figure 2. Alignment of the Cryptosporidium small subunit ribosomal DNA (SSU-rRNA) diagnostic fragments obtained with the CPBDIAGF/CPBDIAGR polymerase chain reaction primer pair for the four genotypes. Only the first 300 columns of the...

Results of genotyping the 18 specimens are in Table 2. For patients 53, 124, 153, 184, 278, and 485, only a single specimen was available. For other patients (e.g., patient 554), four specimens collected during 12 months were available. The same Cryptosporidium genotype persisted throughout a patient's infection.

New taxons may be established within the genus Cryptosporidium on the basis of the isolate's host range together with molecular data, even though morphologic criteria are apparently lacking. We propose to use C. felis Iseki, 1979, instead of feline C. parvum genotype; we believe that the anthroponotic genotype 1 of C. parvum and the Cryptosporidium sp. (canine genotype) described here should be named as distinct species. Although the taxonomy of protists is morphology-based, the taxonomy of bacteria is being reevaluated on the basis of molecular data (35). There is no reason to use different approaches to these two kingdoms, nor is it necessary to postulate that the basis for speciation of Cryptosporidium remains ambiguous or that molecular data lend little support to separation of Cryptosporidium into distinct, valid species (26). Further, we see no evidence for the unconventional conclusions of Tzipori and Griffiths that "...genetic markers in C. parvum can change upon passage to a different host, possibly through a selective mechanism favoring different populations" (26) nor for those of Widmer (21) that "...genetic studies and experimental infections suggest that a selective mechanism triggered by a change in the intestinal environment might be involved in shaping the genetic make-up of C. parvum populations."

The finding of new Cryptosporidium genotypes in immunodeficient patients might suggest a unique susceptibility to infections by divergent Cryptosporidium species circulating in companion animals or livestock. However, recent identification of C. felis in a cow (36) may indicate a complex pattern of flow of different Cryptosporidium species in the environment. When more data on the distribution of these species become available, public health and preventive measures will need to be reevaluated, and isolates may need to be renamed to reflect their natural history. Finally, it is clear that Kinyoun carbol-fuchsin modified acid-fast stain (30) and direct immunofluorescence (31) could detect all genotypes, but this may not be true for diagnostic reagents that may be affected directly (PCR) or indirectly (Ab) by the genetic composition of the new Cryptosporidium isolates reported here. Thus, discovery of these new Cryptosporidium genotypes in human cryptosporidiosis should cause existing diagnostic tools to be reevaluated.

Dr. Pieniazek is a microbiologist with the National Center for Infectious Diseases, CDC. His research interests include molecular reference diagnosis of parasitic diseases and molecular systematics.

The authors thank Jane L. Carter for her expert help with running the DNA sequencer.