Genetic Evidence of Dobrava Virus in Apodemus agrarius in Hungary

Using nested polymerase chain reaction, we sequenced Dobrava virus (DOB) from the rodent Apodemus agrarius in Hungary. The samples we isolated group with DOB samples previously isolated from A. flavicollis. This grouping may indicate host switching.

Hantaviruses, the causative agents of hemorrhagic fever with renal syndrome and hantavirus pulmonary syndrome, are serologically related viruses of the family Bunyaviridae and have a worldwide distribution. Unlike other bunyaviruses, hantaviruses are not transmitted by arthropod vectors. The virus is excreted in the saliva, urine, and feces of infected rodents. Humans become infected by inhalation of aerosols of dried excreta, inoculation through the conjunctiva, or entry through broken skin (1).

Each viral species within the genus Hantavirus is primarily associated with a single rodent species, although accidental infections have been reported in other mammals (2). Four primary reservoirs for hantaviruses are found in Europe: Rattus norvegicus, Seoul virus; Clethrionomys glareolus, Puumala virus (PUU); Apodemus flavicollis, Dobrava virus (DOB); and Microtus arvalis, Tula virus (TUL) (3). An additional rodent species, Apodemus agrarius, is the primary reservoir of Hantaan virus (HTN), the causative agent of Korean hemorrhagic fever, which is found throughout Korea and China but not in Europe. Recently, DOB was isolated from A. agrarius in Estonia (4) and Russia (5).

Hantaviruses are present in Hungary; however, their particular virus strains or species and their distribution are unknown. PUU has been confirmed in western Hungary, but the species in eastern Hungary have not been determined (6).

During field surveys of indigenous rodents in areas used by NATO forces between 1995 and 1996, nine rodents were collected at Tazar Air Force Base, outside Kaposvar, eastern Hungary. A total of 210 trap nights resulted in a trap return of 4.28%. Two A. agrarius, four Microtus agrestis, and three Mus musculus were captured. Animals were live-trapped and euthanized with halazone. Tissue was collected from lungs and kidneys; urine, if present, was also collected.

Total RNA was extracted from collected tissues by using the FastRNA KitGreen (Bio 101), according to the supplier's recommendations. RNA was converted to cDNA and amplified by the Titan One Tube RT-PCR System (Boehringer, Mannheim, Germany), according to the manufacturer's recommendations. Degenerate primers M-4 (ATGAARGCNGAWGA RNTNACMCCNGG) and M-9 (TGRYCNAGYTG TATYCCCATWGATTG) were used to amplify a 583-bp section corresponding to nt positions 605 to 1,188 in the S segment of HTN strain X95077. No DOB strains were used in the laboratory.

A target sequence of 397 bp (nt from 692 to 1,089) was amplified by nested polymerase chain reaction, and both strands of the amplicons were sequenced. Amplified bands of the predicted size were demonstrable in all tissue samples investigated from the two specimens of A. agrarius (designated Tazar-2, Tazar-8). All other samples tested negative. Sequence validity was confirmed by sequencing amplified lung and kidney products from each infected animal. The respective sequences from Tazar-2 and Tazar-8 differed in 3 of the 321 nucleotides examined (99% identity). Both sequences were aligned with the corresponding S-segment section of several DOBs and five other European and Asian hantaviruses. 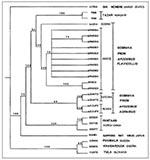 HTN infects A. agrarius populations in Asia but has not been isolated in Europe. Direct enzyme-linked immunosorbent assay has demonstrated the presence of Hantaan-like antigens in A. agrarius in the former republic of Czechoslovakia (5.5%, [7]), the European regions of the former Soviet Union (5.3%, [8]) (28.5%, [9]), and Serbia (2.2%, [10]). Because HTN sequences have not been reported in Europe and HTN and DOB have similar immunologic responses, the earlier findings of Hantaan-like antigens in Europe may represent a more widespread occurrence of DOB in European populations of A. agrarius. Recent verification of DOB in populations of A. agrarius in Estonia (4), Russia (5), and now Hungary supports this conclusion.

The occurrence of DOB in both A. agrarius and A. flavicollis provides an opportunity to evaluate the hypothesis concerning distribution of hantaviruses in related rodent hosts. Phylogenetically different Sin Nombre–like viruses have been found in different populations within species of peromyscine rodents that vary ecologically and geographically throughout their range (11). Although these authors found evidence of cospeciation between the rodent host phylogeny and the host-borne hantavirus phylogeny, evidence of host switching was observed with Peromyscus leucopus–borne New York virus grouped with P. maniculatus–borne viruses rather than with other P. leucopus–borne viruses.

A. flavicollis ranges throughout much of Western Europe eastward to the Ural Mountains, and A. agrarius ranges from Eastern Europe eastward to the Pacific Ocean, covering most of the Asian continent (12). Given the extensive range of both species, an examination of other populations within each species, as well as other species of Apodemus, might allow correlation of the viral and rodent host phylogeny. The pattern of divergence for hantaviruses in New World peromyscine rodent species may be mirrored in Old World arvicoline rodents. Therefore, the existence of more than one hantavirus in A. agrarius may reflect geographic variation within the species or host switching in regions where two host species are potentially sympatric.

Dr. Scharinghausen, an active-duty Army captain, is completing his Ph.D. at Texas A&M University in Wildlife and Fisheries Sciences. His area of expertise is mammalogy, and his research interests include zoonoses and molecular biology.

Genetic Evidence of Dobrava Virus in Apodemus agrarius in Hungary