Bacterial Resistance to Ciprofloxacin in Greece: Results from the National Electronic Surveillance System

According to 1997 susceptibility data from the National Electronic System for the Surveillance of Antimicrobial Resistance, Greece has high rates of ciprofloxacin resistance. For most species, the frequency of ciprofloxacin- resistant isolates (from highest to lowest, by patient setting) was as follows: intensive care unit > surgical > medical > outpatient. Most ciprofloxacin-resistant strains were multidrug resistant.

Soon after the broad-spectrum, highly effective antibiotics fluoroquinolones were introduced, their extensive use and misuse in hospitals and communities, as well as in veterinary medicine, have led to the emergence and spread of resistant strains (1,2). Highly divergent rates of fluoroquinolone resistance in both community-acquired and nosocomial pathogens have been reported worldwide (2). Many factors, including patient characteristics, local epidemiologic factors, antibiotic policies, over-the-counter use (which often leads to inadequate use), lower standard of living in developing countries, lack of information on the prudent use of antibiotics, and use of antibiotics in animal husbandry may contribute to the emergence of quinolone-resistant organisms.

Surveillance is an integral part of controlling resistance, and local and national surveys to identify, monitor, and study the epidemiology of the emergence and spread of resistant isolates are needed (3). To identify national trends and local differences in the epidemiology of quinolone resistance in Greece, we report 1997 ciprofloxacin susceptibility data from the National Electronic System for the Surveillance of Antimicrobial Resistance.

The National Electronic System for the Surveillance of Antimicrobial Resistance was introduced in Greece 3 years ago. Involving 17 hospitals throughout Greece, the system analyzes the routine results of the antibiotic sensitivity tests performed in hospital microbiology laboratories by using WHONET software (4).

In our analysis we included 11,097 isolates (4,204 from medical wards, 2,897 from surgical wards, 1,724 from intensive care units [ICU], and 2,272 from outpatient departments) (Table 1). We focused on the bacteria most frequently encountered in Greek hospitals (National Electronic System for the Surveillance of Antimicrobial Resistance [www.mednet.gr/whonet]; N.J. Legakis, Enare Sentry, unpub. data): Escherichia coli, Klebsiella pneumoniae, Enterobacter species, Pseudomonas aeruginosa, Acinetobacter baumanii, and Staphylococcus aureus. These species are also the most important nosocomial pathogens in most parts of the world in terms of rate of isolation, pathogenicity, and virulence (5,6).

Isolation and identification were performed by standard methods at the microbiology laboratories of each hospital participating in the network. The susceptibility testing methods were Kirby-Bauer disk diffusion (7 hospitals); Sensititre (Sensititre, Salem, NH) (1); Pasco (Difco, Detroit, MI) (8); and VITEK (Bieux-Merieux Marcy l'Etoile, France) (1). The actual zone diameters or MICs (not the interpretations of the tests) were entered into WHONET. The chi-square test was used to evaluate differences in resistance rates between types of wards, as well as between clinical specimens. Pearson's correlation coefficients were calculated for possible associations between resistance rates and hospital size.

As for clinical specimens, each bacterial species followed a different pattern (Table 2). In medical wards, enterobacterial strains isolated from purulent infections were more often resistant to ciprofloxacin, but this difference was statistically significant only for K. pneumoniae (p = 0.012). In surgical wards, blood and respiratory isolates were more often resistant, but this difference was significant only for Enterobacter spp. (p = 0.02). On the other hand, ciprofloxacin-resistant P. aeruginosa strains were more frequently isolated (p = 0.0021) in medical wards from urine and in surgical wards from urine and blood as opposed to all other specimens (p = 0.0005). No significant differences were observed in the rate of isolation of ciprofloxacin-resistant A. baumanii strains among the various clinical specimens. S. aureus strains resistant to ciprofloxacin were mostly methicillin-resistant (MRSA) (Table 2). Very low resistance rates were observed in P. aeruginosa isolated from ear infections, especially from outpatients.

Approximately 75% of K. pneumoniae, 87% of Enterobacter spp., 55% of P. aeruginosa, 76% of A. baumanii, and 75% of MRSA strains were drug resistant to at least three different classes (Table 3). However, 15% of the ciprofloxacin-resistant E. coli were resistant only to this antibiotic, and 25% had additional resistance only to cotrimoxazole. Moreover, 48% of ciprofloxacin-resistant but methicillin-sensitive S. aureus were resistant only to chloramphenicol. 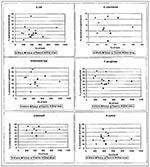 Figure. Resistance rates to ciprofloxavin in each hospital by number of beds and geographic area of the hospital. Only hospitals with more than 20 isolates are included. (Isolates from all wards but...

When we plotted resistance rates to ciprofloxacin against the number of beds in each hospital, we found no correlation (Figure). The rate of isolation of ciprofloxacin-resistant isolates varied greatly by hospital for all species examined: from 1% to 15% for E. coli, 1% to 23% for K. pneumoniae, 1% to 33% for Enterobacter spp., 11% to 33% for P. aeruginosa, 29% to 73% for A. baumanii, and 11% to 48% for S. aureus. Ciprofloxacin resistance was observed in hospitals throughout Greece.

In Europe and North America, a striking difference in the incidence of bacterial resistance to quinolones has been observed between nosocomial and community-acquired infections; resistance is only rarely encountered among the latter (2,7). The incidence of resistance to fluoroquinolones in bacteria isolated from hospital-acquired infections varies among bacterial species, clinical settings, and countries and may be related to local epidemic spread of a few clones (2). The highest incidence of resistance is among P. aeruginosa, Acinetobacter spp., Serratia marcescens, and particularly MRSA strains (8). Our results place Greece among the countries with high resistance levels to quinolones. Although quinolones are among the antibiotics restricted by the Greek Ministry of Health and Welfare, the mean national level of quinolone resistance has increased in most bacterial species during the last 5 years (9).

The high level of resistance in ICUs was expected since ICUs are well-known focuses of antimicrobial resistance (14). Hospitalization in ICUs was an independent risk factor for acquiring infection by multidrug-resistant strains in Greece (15). Moreover, ICU patients are often colonized with endemic, multidrug-resistant strains, which often spread to other wards (16).

We found higher rates of isolation of quinolone-resistant strains of some species in the surgical wards than in medical wards. Patients at high risk for a resistant nosocomial infection (e.g., cancer patients, immunosupressed patients) are usually in medical wards. High resistance in the surgical wards could be the result of nursing practices or unnecessary prophylactic administration of antibiotics, both of which should be further evaluated.

Most quinolone-resistant strains in Greece are also resistant to other clinically relevant antibiotics. The possible clinical and epidemiologic importance of the newly described multidrug efflux pumps in multidrug resistance, mainly in P. aeruginosa, is under investigation worldwide (17). Moreover, the marginal susceptibility of S. aureus to quinolones and the ease with which mutations affecting susceptibility can occur in this species contribute to the observed high rates of quinolone resistance. MRSA strains are no more likely to develop resistance to quinolones than other staphylococci (8). In any case, the favorable accumulation of different traits in quinolone-resistant strains or, alternatively, the favorable potential for mutation to quinolone resistance in multidrug-resistant strains has not been proved. Epidemiologic parameters, and more specifically the sequential introduction of various antibiotic classes in most of the world and in Greek hospitals, could explain multidrug resistance. The extensive aminoglycoside and beta-lactamase use in the 1980s is responsible for the high prevalence of multidrug-resistant plasmids and transposons found in the nosocomial strains of various bacterial genera in Greek hospitals (18-20). The strains harboring these plasmids can survive in the hospital environment and become the best candidates for selection of resistant mutants under the pressure of quinolones.

That quinolone-resistant strains are found in hospitals in all parts of Greece and resistance is not associated with the size of the hospital or its geographic area are consistent with the high prescription rate for quinolones. However, the isolation rate of resistant strains varied considerably by hospital, perhaps because of local epidemiologic factors (e.g., prescribing or nursing habits) or possible (epidemic) spread of strains among patients.

This study has limitations. First, it is based on routine data generated in the microbiology laboratories of participating hospitals. Sometimes different antibiotics are tested in each hospital, which limits the possibility for interhospital comparisons. Moreover, different methods for susceptibility testing are used in each hospital. Data such as antibiotic consumption or days of hospitalization are not available since they are not included as information in the WHONET software and they are difficult and time-consuming to collect routinely.

Quinolone use is a well-proven independent risk factor for resistance (21,22). Nevertheless, local differences indicate that other epidemiologic parameters should be further evaluated.

Dr. Vatopoulos is a medical microbiologist and assistant professor in the Department of Hygiene and Epidemiology, Medical School, Athens University. His chief research interest is the molecular epidemiology of antibiotic resistance in bacteria (mainly gram-negative). He is now involved in the establishment and operation of an electronic network for the surveillance of antibiotic resistance in Greece.

The National Electronic System for the Surveillance of Antimicrobial Resistance has been supported in part by a grant from the Greek Ministry of Health and Welfare.