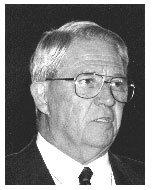 On February 16-17, 1999, in Arlington, Virginia, 950 public health officials, physicians, and other medical personnel, along with government, military, and intelligence experts gathered for the first National Symposium on Medical and Public Health Response to Bioterrorism. Participants were geographically diverse. Represented were 46 states, plus Washington, D.C., and 10 countries: Australia, Austria, Canada, England, Finland, France, Germany, Israel, Italy, and the Netherlands.

The guiding force behind the symposium was the newly established Johns Hopkins Center for Civilian Biodefense Studies, which hopes the discussions will lead to a framework and partnership for strategic planning. The other main sponsors were the Department of Health and Human Services, Infectious Diseases Society of America, and American Society for Microbiology. Twelve other public health professional societies supported the conference.1

From their different backgrounds and perspectives, the more than 20 speakers addressed the following questions: Why are current concerns about bioterrorism real? Why must the medical and public health communities address the issue of bioterrorism? Which biological threats warrant the most concern? What is the possible aftermath of an act of biological terrorism?

A warning against complacency came from the symposium's closing speaker, Margaret A. Hamburg, assistant secretary for planning and evaluation, U.S. Department of Health and Human Services.

In making symposium presentations available here, the organizers hope to raise awareness of the medical and public health threats posed by biological weapons and to foster mutual understanding and collaboration among the diverse groups addressing the threat of bioterrorism.