The prevalence of antibodies to Bartonella vinsonii subsp. berkhoffii in coyotes (Canis latrans) in California ranged from 51% in central to 34% in southern and 7% in northern California. Seropositive coyotes were more likely to be from coastal than inland counties (p < 0.05). The clustered distribution of Bartonella seropositivity in coyotes suggests that B. vinsonii subsp. berkhoffii infection is vectorborne. Further investigation is warranted to evaluate which arthropods are vectors and what the mode of transmission is from wildlife to domestic dogs and possibly humans.

Bartonella species are small gram-negative bacteria, which have been identified in a wide range of mammalian species, including felines and rodents (1-3). Several Bartonella species are human pathogens (4). Bacillary angiomatosis, initially recognized in AIDS patients, was related in the early 1990s to a new bacterium, Bartonella henselae (5,6), which was later associated with cat scratch disease (4). Clinical entities have been associated with several Bartonella species in humans; for example, B. henselae, B. quintana, and B. elizabethae have been associated with human cases of endocarditis (7-11). B. vinsonii, isolated only from small rodents, has not yet been confirmed as a cause of human disease (12). B. vinsonii subsp. berkhoffii, was recently isolated from a dog with endocarditis (13). It was found that 3.6% of 1,920 dogs in North Carolina and Virginia were seropositive to B. vinsonii subsp. berkhoffii antigen (14). Bartonella-seropositive dogs were 5.6 times more likely to be flea infested than were seronegative dogs, but 14 times more likely to have a history of heavy tick exposure. For the dogs with known tick exposure, a high correlation was found between seroreactivity to B. vinsonii subsp. berkhoffii and seroreactivity to Ehrlichia canis and Babesia canis, both well-known tickborne infections. Furthermore, Breitschwerdt et al. (15) reported that dogs infected with Ehrlichia species were frequently coinfected with B. vinsonii subsp. berkhoffii, suggesting that this infection in dogs could also be tickborne.

In July 1996, a 3 1/2-year-old boy was bitten by a coyote (Canis latrans) in Santa Clara County, CA, and became ill with fever and lymphadenopathy. The incident prompted an investigation of possible Bartonella infection in the boy and coyotes. Because of the clinical signs in the child and the absence of Francisella tularensis antibodies in two coyotes, the coyotes were tested for Bartonella antibodies by an immunofluorescence test with a B. henselae antigen, and both tested positive (titers of 1:128 and 1:512). B. vinsonii subsp. berkhoffii, identified by both polymerase chain reaction/restriction fragment length polymorphism (PCR/RFLP) of the citrate synthase and 16S rRNA genes and by partial sequencing of the 16S rRNA gene, was isolated from several coyotes from Santa Clara County (3). The PCR/RFLP profiles of the coyote isolates and the domestic dog isolate were the same (ATCC 51672 strain).

To determine the geographic distribution of B. vinsonii subsp. berkhoffii infection in California coyotes, we analyzed data for age, sex, and origin of the animals to establish possible risk factors associated with seropositivity and to identify high-risk coyote populations. Since coyotes (C. latrans) belong to the same genus as domestic dogs (C. familiaris), wild canids may serve as a reservoir of B. vinsonii subsp. berkhoffii, and transmission to domestic dogs could occur through common ectoparasites.

Coyote blood samples (nobuto filter strips or serum) collected from 34 of the 58 counties in California from 1994 to 1998 were tested serologically for B. vinsonii subsp. berkhoffii antibodies. Age, sex, county of sample collection, and collection date were recorded.

For 869 specimens, specific antibodies against a B. vinsonii subsp. berkhoffii purified antigen (outer membrane proteins) were detected by enzyme-linked immunosorbent assay (16). Cut-off values were established as described (17,18). The cut-off value (Optical Density [OD] > 0.2) for seropositivity was determined by the average OD plus three standard deviations (SD) of 76 nobuto strips from counties where all OD values were < 0.190. Statistically, animals with OD values > 0.2 can be considered to be seropositive with 99% confidence.

Univariate analysis by chi-square and Fisher exact tests was applied first to screen for factors associated with seropositivity to B. vinsonii subsp. berkhoffii. Potential confounders were evaluated by 10% change of estimates, i.e., odds ratio. Multiple logistic regression analysis was applied to evaluate the adjusted effects of the associated factors. 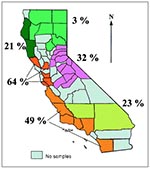 Cats are the main reservoir for B. henselae and cat fleas are the main vector for transmission between cats (20,21). No direct transmission of B. henselae from cat to cat has been documented experimentally (22,23). Therefore, B. vinsonii subsp. berkhoffii transmission among coyotes and between coyotes and dogs is more likely to be vectorborne. Furthermore, the seasonal trends of Bartonella antibody prevalence in coyotes, especially young coyotes, indicate a moderate seasonal peak in summer and fall compared with winter and spring, when ectoparasites are the most abundant (14).

Limited data on the actual distribution of various arthropods throughout California are available. As suggested by Pappalardo et al. (14) and Breitschwerdt et al. (15), ticks could be potential vectors for Bartonella transmission in domestic dogs. The clustered distribution of Bartonella infection in California coyotes shown in this study seems to coincide with the known geographic distribution of tick species (Ixodes pacificus and Dermacentor variabilis) that can feed on carnivores in California (24). According to the studies of Chaniotis et al. (25) and Ayala et al. (26), the distribution of sandflies in California is mainly in the Upper Sonoran zone of central California. This distribution could also match the coastal range of Bartonella infection in coyotes. Since sandflies are well-known vectors for B. bacilliformis transmission, they could also be considered for Bartonella spp. transmission in coyotes. Nevertheless, further studies need to be conducted to verify this hypothesis. In domestic carnivores, flea infestation is common and widespread in most of California. Cat fleas (Ctenocephalides felis) have been shown to be responsible for B. henselae infection in cats, and they also can infest domestic dogs and possibly coyotes. Although flea transmission cannot be completely ruled out, the dog study conducted in the Eastern United States showed that ten control dogs with heavy flea infestation but no known tick exposure had no seropositivity to B. vinsonii subsp. berkhoffii (14).

Only a few infectious agents can be transmitted by multiple vectors, e.g., tularemia and relapsing fever. Therefore, further investigation will be necessary to determine which of all the potential vectors mentioned above can harbor B. vinsonii subsp. berkhoffii under natural conditions and which one plays a major role for B. vinsonii subsp. berkhoffii transmission in canids. Furthermore, it is necessary to evaluate the risk of domestic dog infection with Bartonella spp. from wild canids and the potential risk of transmission to humans.

Dr. Chang is a doctoral student in Epidemiology at the University of California, Davis, under the direction of Dr. Bruno B. Chomel. His research interests include molecular epidemiology of Bartonella infections and potential vectors for Bartonella spp. transmission.

The authors thank the California County Health Offices and their trappers for providing blood samples from coyotes as part of the California Plague Surveillance Program and Pamela K. Swift for initiating the coyote testing.

1An earlier version of this paper was presented at the Second International Conference on Emerging Zoonoses, Strasbourg, France, November 5–9, 1998.