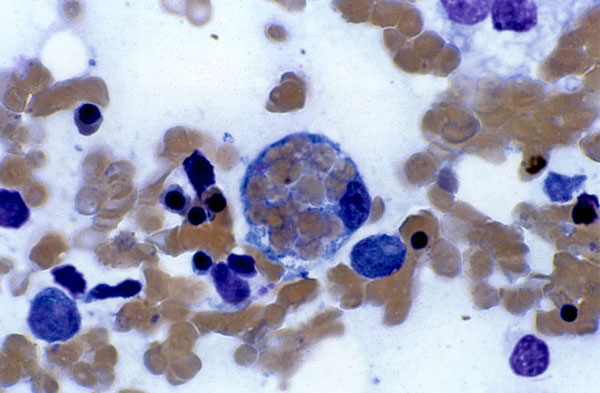 Figure 1. Hemophagocytosis in the bone marrow of an 18-year-old woman with Epstein-Barr virus (EBV)-associated hemophagocytic lymphohistiocytosis. The patient visited her physician in September 1997 with pharyngitis and an elevated heterophile agglutinin titer. She was diagnosed with infectious mononucleosis, and her symptoms resolved in 2 weeks. Approximately 2 months later, she had persistent, spiking fevers and became jaundiced; her immunoglobulin (Ig) M to EBV capsid antigen was positive; and EBV capsid IgG and nuclear IgG were negative. She had pancytopenia and was hospitalized. Bone marrow evaluation revealed a hypocellular marrow, with active hemophagocytosis. The macrophage in the center of this image appears "stuffed" with phagocytosed erythrocytes. Phagocytosis of platelets and leukocytes by macrophages was also seen (not shown). The patient was treated with intravenous immunoglobulin, steroids, and cyclosporine A, but not etoposide. Her condition worsened; she had respiratory, renal, and hepatic failure; and she died of an intracerebral hemmorhage on hospital day 34, 3 1/2 months after her initial illness. Original photomicrograph 100 X magnification with oil immersion, courtesy of Frank Evangelista, Beth Israel Deaconess Medical Center. Photomicrograph published in Blood 1999;63:1991 and reproduced by permission of the publisher.