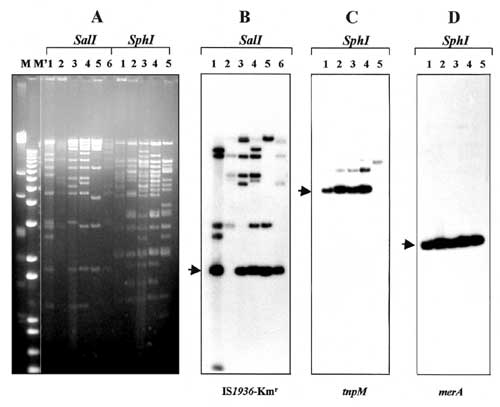 Figure 2. . Restriction enzyme analysis and detection of common genetic elements in IncFI plasmids. Numbers above each lane indicate plasmid reference numbers as defined (Table). M and M' are HindIII-digested lambda DNA and 1-kb Plus DNA ladder (GibcoBRL), respectively. A: agarose (0.8%) gel electrophoresis in 1x Tris-borate-EDTA buffer of plasmids digested with restriction endonucleases SalI and SphI. DNA was stained with ethidium bromide and visualized under UV light. B: Southern blot hybridization of SalI-digested plasmids with the IS1936-Kmr probe purified as 1.8-kb SalI fragment from plasmid pACYC184::Tn1935 (10). C and D: Southern blot hybridizations of SphI-digested plasmids with the tnpM and merA probes, respectively. The tnpM probe was amplified with primers corresponding to nt 3689-3709 and nt 4070-4050 of the released Tn21 sequence (GenEMBL accession no. AF071413). For synthesis of the merA probe, primers annealing to nt 17224-17249 and nt 17931-17907 of the Tn21 sequence were used. Plasmid pACYC184::Tn21 (10) was used as the template. Probes were labeled with [α-32P]dCTP by using a random priming kit (GibcoBRL, Rockville, MD). The arrows point to predicted hybridization fragments.