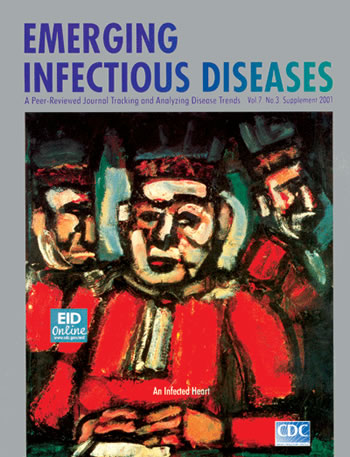 Georges Rouault (1871-1958), a French expressionist artist, started his career as an apprentice to a stained-glass maker, and after 1891, studied under Gustave Moreau. In 1905, he exhibited several paintings with the Fauves and Indépendants, two groups of artists not included in the official Salon of the French Royal Academy. Rouault received major recognition for his work in 1937, when his paintings were displayed in conjunction with the Paris World's Fair.

A devout Catholic, Rouault painted images of Christ, along with prostitutes, lawyers, judges, and clowns, as part of a commentary on the corruption of society. His sorrowful and bitter delineations of these human characters caused quite a stir in the Paris of his day. The suffering of Christ was his frequent subject. He believed in the teaching of the Gospel and stated that his only ambition was to paint a Christ so moving that those who saw the image would be converted. His thickly encrusted, powerfully colored images, outlined heavily in black, have the effect of icons and are suggestive of stained glass.

Around 1914, Rouault began more than a decade of work for the publisher Vollard. Using a variety of graphic techniques, he executed a series of prints called Miserere et Guerre to appear with text by the poet André Suarès. Rouault continued to work on the series through World War I and again from 1922 until 1927. He continued to paint the themes he had used earlier, but in a more tranquil style.

In much of his late work, Rouault addressed the theme of human suffering. In his paintings of judges he aimed to convey contempt for the system of human justice, in particular the presumption of the right of some to judge others, often less fortunate. The heavy, unsmiling features of the judges in The Three Judges underscore what Rouault saw as the dubious morality and potential cruelty of the judicial system, symbolized here by the judges' red ceremonial hats and robes. The artist once spoke of the anguish he felt at the sight of humans passing judgment on their fellow humans.

Examples of Rouault's work can be found in many European and American collections.