Escherichia coli are facultative anaerobes in the normal intestinal flora of humans and animals (2,3); however, pathogenic strains of these bacteria are an important cause of bacterial infections. In humans, these strains are the foremost cause of urinary tract infections (4), as well as a major cause of neonatal meningitis (5), nosocomial septicemia, and surgical site infections (6). Infection with Shiga toxin–producing E. coli (STEC) may also result in complications including thrombocytopenic purpura, severe hemorrhagic colitis, and hemolytic uremic syndrome (7). While therapeutic options vary depending on the type of infection, antimicrobials including trimethoprim-sulfamethoxazole, fluoroquinolones, and third-generation cephalosporins are generally recommended for treating infections caused by E. coli other than STEC (6). In contrast, because these antimicrobials may increase levels of free Shiga toxin in vivo, thus facilitating disease progression, the usefulness of antimicrobials in treating STEC infection remains less clear (6,8).

Recent reports have suggested the use of tetracyclines, sulfa drugs, cephalosporins, and penicillins to be a major factor in the emergence and dissemination of antimicrobial-resistant E. coli (9–14). However, a relative paucity of information exists regarding antimicrobial resistance in E. coli from nonhospital sources, especially those from animal sources. In this study, antimicrobial susceptibility profiles were determined for E. coli isolates of serotypes O26, O103, O111, O128, and O145. Strains of these serotypes may cause urinary tract and enteric infections in humans and have been implicated in infections with STEC (15–19). The isolates were originally gathered from diverse sources, including food animals, companion animals (i.e. dogs, cats, and rabbits), and humans. Our primary objective was to characterize the extent of antimicrobial resistance in these E. coli serotypes from agricultural and clinical settings.

Antimicrobial susceptibility testing of all isolates was done with broth microdilution using the PASCO MIC/ID system (Becton, Dickinson and Company, Sparks, MD). Testing was done according to manufacturer’s instructions and according to guidelines developed by the National Committee for Clinical Laboratory Standards (NCCLS) (20). Tested antimicrobials, dilution ranges, and resistance breakpoints are listed in Table 2. Ceftiofur- and cefoxitin-resistant isolates were further examined for production of extended-spectrum--lactamases (ESBLs) with disk diffusion according to NCCLS standards (21).

Isolates were grown at 37°C overnight on veal infusion agar (Becton, Dickinson and Company). A loopful of culture was resuspended in 200 µL of distilled water, incubated at 99°C for 15 min, and centrifuged at 12,000 x g for 2 min. The supernatant was used as a template for amplification of Shiga toxin genes (stx1 and stx2), the intimin gene (eae), and the enterohemolysin A gene (hlyA) through multiplex polymerase chain reaction (PCR) (22). Primers described by Witham et al. (23) and Paton (24) were used for amplification of stx1 and stx2, respectively; those described by Gannon et al. (25) were used for amplification of eae; and those described by Fagan et al. (26) were used for amplification of hlyA. Each 11-µL PCR contained 37.5 ng stx1 primers, 15 ng stx2 primers, 15 ng eae primers, 75 ng hlyA primers, 0.18mM each deoxyribonucleotide, 4.0mM MgCl2, 50mM Tris-HCl (pH 8.3), 275 ng bovine serum albumin, 2% sucrose, 0.1mM Cresol Red (Idaho Technology, Inc., Salt Lake City, UT), and 0.4 U Taq DNA polymerase (PGC Scientifics Corp., Gaithersburg, MD). Reaction contents were cycled as described (11) after which products were electrophoresed in 1% agarose gels at 200 V for 30 min and visualized under ultraviolet light. E. coli O157:H7 (ATCC 43895) was the positive control for all reactions.

Of the isolates in this study, the highest frequencies of antimicrobial-resistant phenotypes were observed for E. coli isolates from humans and turkeys (Figure 1). Fifty-nine percent of isolates from humans were resistant to sulfamethoxazole, 59% to streptomycin, 56% to ampicillin, 56% to tetracycline, 50% to cephalothin, 38% to trimethoprim-sulfamethoxazole, 34% to chloramphenicol, and 18% to amoxicillin-clavulanic acid (Figure 1A). Eighty-four percent of isolates from turkeys were resistant to sulfamethoxazole, followed by 82% to streptomycin, 71% to tetracycline, 49% to ampicillin, 39% to cephalothin, 28% to amoxicillin-clavulanic acid, 24% to gentamicin, and 20% to nalidixic acid (Figure 1B). Nalidixic acid-resistant isolates from turkeys were found to have ciprofloxacin MICs ranging from 0.12 to >8 µg/mL, whereas each of the nalidixic acid-susceptible isolates from these animals were found to have ciprofloxacin MICs of 0.03 µg/mL or less (data not shown).

Presence of Virulence Genes and Antimicrobial Resistance in STEC 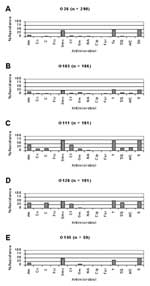 Of the 752 E. coli isolates characterized in this study, approximately half displayed resistance to one or more antimicrobials, including penicillins, sulfonamides, cephalosporins, tetracyclines, and aminoglycosides. These data are in accord with multiple previous studies suggesting use of these drugs has been a key factor in the emergence of antimicrobial-resistant E. coli (10-13,27,28). In addition, several other findings from this study are noteworthy in terms of their public health importance.

Ceftiofur is the sole extended-spectrum cephalosporin approved for use in food animals in the United States, and it is not approved for use in human clinical medicine (29). The observation, therefore, that two isolates from humans displayed resistance to ceftiofur suggests the transfer of resistant E. coli from food animals to humans (28,30,31). However, because these two isolates also displayed resistance or decreased susceptibility to other -lactam antimicrobials, including ampicillin, amoxicillin-clavulanic acid, cephalothin, cefoxitin, and ceftriaxone, ceftiofur-resistance in these isolates might have been because of -lactam use in clinical medicine. Similarly, the relatively high number of cefoxitin-resistant isolates from turkeys compared to those from other sources may be attributable to -lactam antimicrobial use in turkey production. While, based on confirmatory tests, none of the ceftiofur- or cefoxitin-resistant isolates identified in this study yielded phenotypes consistent with ESBL production, these isolates may have produced plasmid-mediated AmpC-like -lactamases, similar to those described for other E. coli and Salmonella isolated from food animals (28–30). Consequently, work is ongoing to further characterize the genetic basis of -lactam resistance in these isolates.

The observation that 20% of E. coli isolates from turkeys were resistant to nalidixic acid (concomitant with increased MICs for ciprofloxacin) is important considering fluoroquinolones are used to treat a range of E. coli infections in humans (6). This finding, similar to those of previous reports (14,32,33), may be largely attributable to fluoroquinolone use in turkeys. The impact of fluoroquinolones such as enrofloxacin in turkey production on the emergence of quinolone- and fluoroquinolone-resistant bacteria should continue to be monitored.

The multiple antimicrobial-resistant phenotypes observed in this study may have resulted from the spread of mobile genetic elements. For example, the observation that nearly 75% of ampicillin-resistant E. coli isolates were also resistant to streptomycin and tetracycline suggests resistance genes for these drugs are linked on plasmids. Moreover, the widespread resistance to sulfamethoxazole implies the presence of class I integrons, which are also important in conferring resistance to multiple antimicrobials (35). Research is continuing to further characterize sulfamethoxazole-resistant E. coli for the presence of these mobile genetic elements.

Because the isolates from this study were to a large extent unevenly distributed as to source of isolation versus year of isolation, analyzing resistance trends over time was not possible. Likewise, meaningful analysis of antimicrobial resistance in relation to geographic origin or to serotype was not possible. Long-term prospective studies examining isolates from defined geographic locales are required to more precisely detect temporal and spatial differences in antimicrobial resistance in strains of E. coli.

At the time this article was written, Dr. Schroeder was a faculty research associate at the University of Maryland, under the direction of Dr. Meng. He is now a risk analyst with the United States Department of Agriculture Food Safety and Inspection Service in Washington, D.C. Together with the coauthors, his research interests include factors affecting antimicrobial resistance of food-borne bacterial pathogens.

We thank Shabbir Simjee, Steven Foley, and Flavia Rossi for providing insightful comments throughout preparation of the manuscript.

The study was made possible by grant USDA/NRI2000-02600 from the U.S. Department of Agriculture, and by the University of Maryland/U. S. Food and Drug Administration Joint Institute for Food Safety and Applied Nutrition.