Buruli Ulcer in Ghana: Results of a National Case Search

A national search for cases of Buruli ulcer in Ghana identified 5,619 patients, with 6,332 clinical lesions at various stages. The overall crude national prevalence rate of active lesions was 20.7 per 100,000, but the rate was 150.8 per 100,000 in the most disease-endemic district. The case search demonstrated widespread disease and gross underreporting compared with the routine reporting system. The epidemiologic information gathered will contribute to the design of control programs for Buruli ulcer.

Buruli ulcer disease is assuming public health importance in many countries, prompting the establishment of a Global Buruli Ulcer Initiative by the World Health Organization (WHO) in early 1998. Ever since Mycobacterium ulcerans infection was first described in Australia in 1948 (1) and later named Buruli ulcer in Uganda (2), cases have been reported throughout the tropical and subtropical world. In the African WHO region, at least 16 of 46 member countries report cases, especially in West Africa and parts of Eastern and Central Africa (3).

One characteristic of the disease is its apparent association with bodies of water worldwide (4,5). The recent identification of M. ulcerans in certain water insects has raised the possibility of mechanical transmission of the infection (6).

Buruli ulcer commonly affects the young, even though cases are reported in all age groups (7,8). Oluwasanmi et al. (5) and van der Werf (8) did not find any sex difference in their series, but Barker reported prevalence to be higher among women than men and among boys than girls. The disease is characteristically found more often on the extremities than on the trunk (9). The infection is usually restricted to relatively small areas and patchy in its distribution (10,11).

The first probable case of Buruli ulcer in Ghana was reported in the Greater Accra Region in 1971; the presence of additional cases along the tributaries of the Densu River in the area was considered likely (12). In 1989, van der Werf et al. described 96 cases in the Asante Akim North District of Ashanti Region (8). This report was followed by the description of a major endemic focus in Amansie West District in the same region (13). Since then, isolated cases have been found in scattered communities in many parts of the country, generating much political and media concern and interest.

In 1993, a passive surveillance system for reporting Buruli ulcer was initiated in Ghana. By the end of 1998, approximately 1,200 cases had been reported from four regions. Gross underreporting was suspected, however, as the media continued to report cases in remote rural communities. Because most cases were known to be in relatively deprived, inaccessible areas, the routine reporting system was judged inadequate to provide a true picture of the extent of disease and the geographic distribution of cases for design of a national control program. In addition, a case search would provide baseline data against which intervention measures could be assessed.

The main objective of the national case search was to establish the extent of the disease in Ghana to facilitate development of a national program for its control. The specific objectives were to determine the epidemiologic characteristics of Buruli ulcer in Ghana and determine physical accessibility of disease-endemic communities to health-care services.

Geographic distribution was defined in terms of regional, district, subdistrict, and community distribution of cases. The burden of disease was considered in terms of number of cases affected, age and sex distribution, clinical presentation (preulcerative, ulcer, or deformity), and site of lesion. Preulcerative lesions include nodular, plaque, papular, and nonulcerative edematous forms, as described by the WHO Global Buruli Ulcer Programme (3). Deformities include scars, constriction of limbs, ankylosis of joints, or amputations.

The case search covered every district and known community in Ghana from June to July 1999. A team of 20 national facilitators was trained in the use of the survey instruments and in the clinical presentation of the disease in an endemic focus. Two facilitators were then sent to each region to train regional teams (three from the regional level and two from each district). Seven teams of two persons each from the subdistrict and communities performed the case search.

The permission of the local political and traditional authorities was sought in advance, and the purpose of the search was explained to them and to all participants. The data collectors used a pictorial document designed by the WHO Global Buruli Ulcer Initiative (3). At each village and community, they showed the pictures of Buruli ulcer disease at different stages of development to as many people as possible and asked whether anyone in the village had a similar condition. All persons with lesions that met the WHO standard case definition were interviewed with a simple questionnaire. There was no laboratory confirmation of the cases. A prepackaged dressing was given to each person identified as having ulcers, and the particulars of all the cases were provided to local health authorities for follow-up. The process was repeated in each village until the whole district was covered.

A team from the national level, including a dermatologist familiar with the disease, later validated findings in two randomly selected districts from a region where the disease had not previously been endemic. All cases reported there were found to be consistent with the clinical case definitions used.

Data from all the regions were entered centrally and later cross-checked and edited by EpiInfo 6 software. Data analysis was done both manually and by EpiInfo 6, as appropriate. Yates corrected chi-square and Cornfield 95% confidence interval tests were used as the statistical tests.

Information on regional population distribution was taken from the 2000 national census. About 200 forms from Atwima District of Ashanti Region had to be excluded from the data analysis because information was incomplete on almost all variables. Records with missing data for a particular variable were also excluded from analysis of that variable. 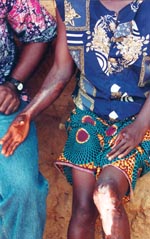 We identified 5,619 patients with 6,332 suspected Buruli lesions at various stages of development. Approximately 48.5% of the lesions were at the ulcerative stage (Figure 1) and 12.5% at the preulcerative stage; 36.3% had formed scars (Figure 2), and 2.7% of lesions were associated with other forms of deformities.

Approximately 49% of all patients for whom data were available (n=5,596) were female. The ages of those with active lesions ranged from 0.8 to 100 years (median 25 years; first quartile 12 years; third quartile 50 years; and mean 32 years.) 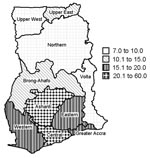 All cases were diagnosed on the basis of clinical case definitions without laboratory confirmation; as a result, atypical cases such as early and healed lesions may be confused with other diseases endemic in Ghana (e.g., yaws). Experience, however, shows that in disease-endemic communities Buruli ulcer is readily diagnosed empirically.

The overall crude prevalence rate of 20.7 per 100,000 exceeds that of for leprosy (9 per 100,000) in 1999, making Buruli ulcer the second most prevalent mycobacterial disease in Ghana after tuberculosis (prevalence 66 per 100,000). Before the case search, a cumulative total of approximately 1,200 cases of Buruli ulcer had been reported from five regions in Ghana over a 6-year period from 1993 to 1998. The case search has confirmed that the disease is grossly underreported. The distribution of the disease is much more widespread than earlier thought; suspected cases were identified in all 10 regions and at least 90 of 110 districts. Although the infection was thought to be restricted to relatively small patchy isolated foci separated by large disease-free areas (11), our impression is that the more one looks for the disease in known disease-endemic and nearby areas the more likely additional cases will be found.

Our study confirms findings elsewhere that the disease affects children more than adults (7,8). Marston et al. found the highest rate of infection among children 10-14 years of age in a disease-endemic area in the Daloa Region of Côte d’Ivoire (14). This observation has been misinterpreted to mean that the disease affects only children. Our study demonstrates that all age groups can be affected. At least 25% of persons with active lesions were >50 years old.

The preponderance of lesions on the extremities is once again confirmed by our study. About 92% of lesions were located on the extremities in the study by Marston et al. in Côte d’Ivoire (14), compared with 91% in our study. Barker noted that among girls and women there was equal frequency of arm and leg lesions, while among boys leg lesions predominate (9). Our results, however, show that lesions on the leg predominate for all age groups and both sexes. Even for females, leg lesions were 2.4 times more frequent than arm lesions.

At least 40% of patients with the disease lived in communities ≥5 miles from the nearest health facility capable of providing the minimum service of wound dressing. This distance poses problems for patients who have to travel repeatedly for care for such a chronic ailment.

The study has shown that Buruli ulcer disease in Ghana is much more widespread than previously thought. In all areas where Buruli ulcer cases have been identified, the extent of the disease is likely to be much greater than currently recognized through the routine reporting system. The data set on the disease from the study is among the largest anywhere in the world and can contribute substantially to the epidemiologic description of this relatively new disease. The information generated should contribute greatly to the design, implementation, and evaluation of Buruli ulcer control programs in Ghana.

Dr. Amofah is deputy director of public health, Ministry of Health, Ghana. For 9 years he was regional director of health services in the Ashanti Region, where he had firsthand experience in managing Buruli ulcers.

We thank Jordan Tappero for support and constructive suggestions; members of the Buruli Ulcer Advisory Committee, Ghana, especially Afua Hesse and Pius Agbenorku and all field workers who contributed to the success of the project in diverse ways; and Mr. Addo and Dr. Ahadzie for their immense contributions during data entry and analysis.

Funding for this study was provided by the World Health Organization, the United Nations Children’s Fund (UNICEF), and the Ministry of Health of Ghana.

Buruli Ulcer in Ghana: Results of a National Case Search