Severe Histoplasmosis in Travelers to Nicaragua

We investigated an outbreak of unexpectedly severe histoplasmosis among 14 healthy adventure travelers from the United States who visited a bat-infested cave in Nicaragua. Although histoplasmosis has rarely been reported to cause serious illness among travelers, this outbreak demonstrates that cases may be severe among travelers, even young, healthy persons.

Histoplasmosis is a systemic infection caused by the dimorphic fungus, Histoplasma capsulatum. Infection results from inhaling spores, usually through exposure to bat and bird droppings in barnyards and caves. Although outbreaks have occurred after visits to bat-infested caves, histoplasmosis has not been frequently recognized as travel-related and has rarely led to serious illness among young, healthy travelers. This fungus is endemic in the United States along the Ohio and Mississippi River valleys and many other parts of the world, particularly Latin America. Histoplasmosis is often asymptomatic in endemic settings, but infection can result in a spectrum of illness, ranging from mild influenzalike illness to acute pulmonary infection and disseminated extrapulmonary disease. Immunocompromised persons and the elderly are at greater risk for disseminated disease (1). This report describes a recent outbreak of histoplasmosis among U.S. adventure travelers to Nicaragua that was associated with a high attack rate and hospitalizations among previously healthy travelers.

In June 2001, five persons with a febrile respiratory illness visited a community hospital. The patients were among 15 persons (age range 19–61 years; median 38 years), residents of four states, who had participated in a geology-biology community college class trip to Nicaragua. To determine the cause and describe characteristics of the outbreak, we interviewed trip participants and reviewed medical records to collect demographic information, clinical history, and activities during the trip. Based on the partcipant’s exposure to a cave with bats and clinical characteristics suggestive of acute histoplasmosis, diagnostic testing for histoplasmosis was conducted.

A case of acute histoplasmosis was defined as illness in a person who tested positive by one of the following laboratory tests: serology, urine antigen, histopathology, or culture. Immunodiffusion and complement- fixation serologic tests were performed at the Centers for Disease Control and Prevention (CDC). The immunodiffusion test was considered positive if an H or M band or both were detected. A complement-fixation titer to the yeast or mycelial antigens of >1:32 or a fourfold increase in the titer between acute- and convalescent-phase serum specimens was considered evidence of acute infection. Acute-phase serum specimens were obtained 2–3 weeks after exposure. Convalescent-phase serum specimens were collected approximately 3 months after exposure. One patient underwent bronchoalveolar lavage and bronchoscopy, and a biopsy specimen was obtained. Lung tissue was stained with hematoxylin and eosin and Gomori methenamine silver stains. Bronchoalveolar lavage washings were cultured by conventional methods (2). Identification of the organism as H. capsulatum was confirmed by GenProbe assay (GenProbe, San Diego, CA). Urine antigen tests, which were performed 2 weeks after exposure, are considered positive if >1 unit is detected (3,4).

The travelers began their trip on May 19 and returned to the United States on May 30. During their trip, they explored rock quarries, visited a biological research station, swam in freshwater lakes, and were exposed to parrots and insects. On May 21, a total of 14 of the 15 travelers entered a small cave that had previously been used as a silver mine. They remained in the cave for 10 minutes, during which time they saw several flying bats and bat guano on the ground.

The infection rate was 100% among the 14 travelers who entered the cave, and 12 (86%) were symptomatic. All 14 patients had serologically confirmed infection. Of the 14 patients, 12 (86%) had urine antigen tests (Table). The only traveler who did not enter the cave tested negative by serology and urine antigen.

Of the infected travelers, 8 (57%) were female. The average incubation period was 11 days (range 10–12 days), assuming that exposure occurred on May 21. Among the 12 symptomatic persons, 12 (100%) had a fever of 38.9°C to 40°C, nonproductive cough, myalgias, fever, chills, night sweats, loss of appetite, and mild headache. Many had nausea and vomiting (83%), chest pain (58%), and arthralgias (58%). Six persons had mild to moderate respiratory distress, with oxygen saturation of 88% to 95%. On physical examination, all the travelers’ lung fields were clear to auscultation, a feature consistent with histoplasmosis infection. The two asymptomatic persons had previous exposure to bats or caving. Among the symptomatic persons, we found no differences in severity of symptoms according to sex, prior exposure to spelunking, residence in a histoplamosis-endemic area, or activities while in the mine.

In accordance with clinical treatment guidelines, physicians decided to treat patients with itraconazole for 6 to 12 weeks; some patients also received steroids (5). No patients required discontinuation of therapy was discontinued because of adverse effects. 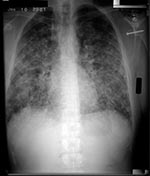 Figure. Chest radiograph of patient who acquired acute pulmonary histoplasmosis after visiting a cave in Nicaragua.

Hematoxylin and eosin–stained sections of the lung tissue from the biopsy showed macrophages and neutrophils in the interstitium; no granulomatous inflammation was observed. Gomori methenamine silver stain demonstrated budding yeasts compatible with H. capsulatum. Culture of the bronchoalveolar lavage fluid from this patient grew H. capsulatum after 4 weeks of incubation.

This report highlights the importance of histoplasmosis as a potentially serious travel-related illness. Histoplasmosis is usually considered a mild, self-limited illness; however, this outbreak of histoplasmosis among previously healthy travelers was associated with a 100% infection rate of histoplasmosis and an 86% rate of symptomatic infection in the persons who entered the cave. Among the symptomatic persons, 50% required hospitalization and 83% missed school or work (range: 2 weeks–3 months) as a result of their illness (Table). Because of the high attack rate and the large percentage of patients with severe infection, these travelers were likely exposed to very high concentrations of H. capsulatum spores during their brief visit inside the cave.

H. capsulatum exists throughout the world (1,6); however, nonimmune travelers from areas with a low prevalence of histoplasmosis, who engage in high-risk activities in disease-endemic areas, are at greater risk of acquiring symptomatic fungal infection. The number of outbreaks of histoplasmosis, especially among U.S. travelers to Latin America, has increased. Histoplasmosis has been reported in groups of travelers who entered caves with bats in Costa Rica (7; unpub. data, Centers for Disease Control and Prevention CDC), Ecuador (8), and Peru (9). In 2001, more than 200 college students became infected with histoplasmosis during a spring break trip to Acapulco, Mexico (10,11). Outbreaks and isolated cases of histoplasmosis have also been described among non–-U.S. travelers to Latin America and other areas of the world (12–19).

The timely diagnosis of histoplasmosis in travelers may be particularly challenging for clinicians evaluating one sporadic case or a patient involved in an undetected multistate outbreak. Antibody response can take 4–6 weeks to develop, reducing its usefulness in the acute setting and requiring the collection of a convalescent-phase specimen for confirmation. Antibodies may also persist for 5 years, making it difficult to distinguish between prior and recent infection without obtaining a convalescent-phase specimen. The sensitivity of immunodiffusion is 72% to 85%, while that of complement fixation is 80% to 90% (20,21). The antigen test can be used for urine, cerebrospinal fluid, serum, and bronchoalveolar lavage fluid, and results are available in 24 hours. This test had been used most extensively in AIDS patients; however, it is less sensitive in nonimmunocompromised persons with acute pulmonary infection. Sensitivity of the urine antigen test for detection of acute pulmonary infection ranges from 44% to 75% and increases when performed early after the onset of symptoms (3,4).

In this outbreak, 80% of the travelers were prescribed appropriate malaria chemoprophylaxis during a pretravel assessment. However, most clinicians may not have thought to counsel them about histoplasmosis risk and prevention. During pretravel visits, clinicians should review patients’ itineraries for possible fungal exposures and should counsel them to avoid entering caves, especially those known to be bat infested. Since travelers may not know whether their itinerary includes visits to bat-infested caves, adventure travelers and persons who are at high risk for severe histoplasmosis infection, such as immunocompromised travelers (especially persons with AIDS), should be counseled to avoid possible exposures, either by avoiding caves or by using special protective masks. The National Institute for Occupational Safety and Health has published guidelines for special masks that can be used to reduce occupational and other exposures (e.g., among spelunkers). Unfortunately, these special masks are bulky and may be impractical for many travelers (22). While most nonimmunocompromised patients with acute pulmonary histoplasmosis improve without treatment, persons with hypoxemia, diffuse pulmonary histoplasmosis, or severe illness requiring hospitalization may benefit from antifungal therapy and, in some cases, corticosteroids (5).

Dr. Weinberg is the team leader for Migrant and Border Health in the Surveillance and Epidemiology Branch, Division of Global Migration and Quarantine, Centers for Disease Control and Prevention. Her research interests include international health, particularly issues in Hispanic populations. She has coordinated the binational activities of the U.S–- Mexico Border Infectious Diseases Surveillance network since 1999.

We thank Juan Jose Amador of Nicaraguan Ministry of Health, Phyllis Kozarsky, the members of the group who participated in this trip, and the Histoplasmosis Reference Laboratory, which performed the urine antigen testing, for their help with this investigation, and Ava Navin for editorial assistance.

When the work was done for this outbreak investigation, Ms. Connolly was associated with Indiana University. She is currently an employee of MiraVista Diagnostics, Indianapolis, Indiana.

Severe Histoplasmosis in Travelers to Nicaragua