We describe a 27-year-old man with acute cholecystitis, hepatic abscess, and bacteremia caused by Clostridium hathewayi, a newly described gram-negative, endospore-forming, rod-shaped bacterium. This report is the first of human infection caused by this microorganism.

The genus Clostridium is a phylogenetically heterogeneous group of anaerobic, endospore-forming, rod-shaped bacteria; they are usually gram positive, but some species may stain gram variable or gram negative (1,2). Clostridium strains are widely distributed in the environment and form part of the normal colonic microflora of humans and many animals (1,2). More than 150 species have been described to date, but most are believed to be harmless saprophytes (1). Pathogenic Clostridium spp. may be involved in a wide variety of human infections or illnesses. Such conditions are usually endogenous (e.g., brain abscess, pneumonia, intrabdominal abscess, cholecystitis, bacteremia) and arise from the host’s own microflora; other illnesses may be exogenous (e.g., food poisoning, pseudomembranous colitis, tetanus, botulism, myonecrosis) (1). The most commonly encountered, clinically important clostridia include Clostridium perfringens, C. clostridioforme, C. ramosum, C. butyricum, C. innocuum, C. septicum, C. tertium, and C. difficile (1). C. hathewayi is a newly described species that was first reported by Steer et al. (3). The species was named after Charles L. Hatheway in recognition of his contributions to the C. botulinum group of organisms (3).

Our patient was a 27-year-old, previously healthy Chinese man who immigrated to Canada 10 years previously. The patient sought treatment at the hospital for a 2-week history of intermittent fever and chills that were associated with sharp, nonradiating, right upper quadrant abdominal pain. He did not report nausea, vomiting, diarrhea, or jaundice. The patient did not use alcohol heavily, use intravenous drugs, or engage in high-risk sexual activity. The patient did not have a history of recent travel outside of Canada and was not taking any medications. His medical history, family history, and examination were unremarkable. Upon physical examination, the patient appeared mildly ill and had a temperature of 39.8°C, along with sinus tachycardia. Other findings were unremarkable except for mild right upper quadrant abdominal discomfort with deep palpation. Laboratory testing showed a peripheral leukocytosis with a left shift. Abdominal ultrasound and computed tomographic (CT) scans showed gallbladder wall thickening and inflammation, multiple gallstones, and a single large fluid collection in the right lobe of the liver, with multiple adjacent smaller satellite fluid collections. Acute cholecystitis and hepatic abscess were diagnosed. Two sets of BacT/Alert FAN (bioMerieux Inc., Durham, NC) aerobic and anaerobic blood cultures were drawn, after which the patient received empiric intravenous piperacillin-tazobactam therapy.

The isolates were susceptible to penicillin G (MIC = 0.064 μg/mL), clindamycin (MIC = 0.064 μg/mL), and metronidazole (MIC = 0.032 μg/mL) by Etest. Despite intense efforts, no other microorganisms were isolated from the blood or liver abscess specimens. Antimicrobial therapy was subsequently switched to intravenous ceftriaxone and metronidazole. After marked clinical improvement, the patient was discharged home on oral therapy.

Similar to certain members of the genus Clostridium (e.g., C. clostridioforme and C. ramosum), the organism has a propensity to stain gram negative (3). Subterminal, oval-to-round endospores may be visible. Strains may or may not be motile. Colonies are usually 3 mm in diameter after 72 hours of incubation and are nonhemolytic, grayish-white, opaque, convex, round, shiny, and have a slightly irregular margin (3), similar to our observations (Figure 2). Isolates are typically saccharolytic and ferment a variety of carbohydrate compounds but fail to hydrolyze gelatin or urea, reduce nitrate, or produce indole, lecithinase, or lipase (3). Although these phenotypic tests can possibly distinguish this organism from closely related species, these methods are too cumbersome and time-consuming for routine use in the clinical setting. However, the increasing ease, availability, and affordability of identification methods that use DNA sequencing have identified uncommon microbial pathogens that are difficult to identify and often encountered in the clinical microbiology laboratory. The 16S rRNA gene (≈1,500 bp in size) is ubiquitous in all eubacteria and has served as the principal target of bacterial identification protocols that are sequence-based. Each unique bacterial species has a distinctive 16S rRNA gene sequence profile (signature); hence, the signatures of unknown bacteria can then be compared to publicly available or commercial sequence databases to determine if the organism belongs to a particular known species. 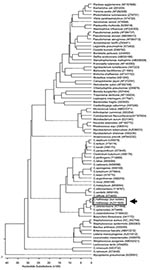 Although the sequence profile of our isolate (GenBank accession no. AY552788) was 99% identical to the type strain of C. hathewayi reported by Steer et al. (3) (GenBank accession no. AJ311620), the two sequences are believed to be completely identical since the 1% difference in the sequence profiles was attributed to uncharacterized bases in the sequence reported by Steer. C. hathewayi displays the closest phylogenetic relationships with C. celerecresens and C. sphenoides (Figure 3), which may be found as part of the normal human colonic microflora (3,4). However, the natural habitat of C. hathewayi is not known. To the best of our knowledge, human infection caused by this bacterium has not been previously reported. The two isolates described by Steer et al. (3) were recovered from a phytic acid-degrading, organism enriching chemostat that had been injected with human feces from healthy donors. In contrast, the isolation of C. hathewayi from our patient’s blood and hepatic abscess fluid specimens is convincing evidence of its clinical importance, although this finding needs to be corroborated by animal studies. The finding is not surprising, given that Clostridium spp. are not uncommonly implicated in cases of acute cholecystitis and associated bacteremia (5). Our report highlights the importance of C. hathewayi as a potential human pathogen.

Dr. Elsayed is an associate medical microbiologist at Calgary Laboratory and an assistant professor of pathology and laboratory medicine and microbiology and infectious diseases at the University of Calgary. His research interests include the development of molecular assays to detect and characterize microorganisms and fungal and mycobacterial infections.

Dr. Zhang is an assistant professor of pathology and laboratory medicine, microbiology and infectious diseases and medicine at the University of Calgary and a medical laboratory scientist at the Centre for Antimicrobial Resistance, Calgary Health Region/Calgary Laboratory Services/University of Calgary. His research interests include the molecular mechanisms and detection of antimicrobial-resistant organisms.

Page created: April 12, 2011
Page updated: April 12, 2011
Page reviewed: April 12, 2011
The conclusions, findings, and opinions expressed by authors contributing to this journal do not necessarily reflect the official position of the U.S. Department of Health and Human Services, the Public Health Service, the Centers for Disease Control and Prevention, or the authors' affiliated institutions. Use of trade names is for identification only and does not imply endorsement by any of the groups named above.