SARS coronavirus injected intratracheally into chickens, turkeys, geese, ducks, and quail, or into the allantoic sac of their embryonating eggs, failed to cause disease or replicate. This finding suggests that domestic poultry were unlikely to have been the reservoir, or associated with dissemination, of SARS coronavirus in the animal markets of southern China.

An outbreak of severe acute respiratory syndrome (SARS) occurred in Guangdong Province, People’s Republic of China, in November 2002 and spread to patients in 30 countries in Africa, Asia, Australia, Europe, and North and South America (1,2). As of July 11, 2003, SARS had been diagnosed in 8,437 patients; 813 died (1). A novel coronavirus was isolated in tissue culture or detected by reverse transcription–polymerase chain reaction (RT-PCR) from multiple respiratory specimens in many patients with SARS (2–4). The SARS-coronavirus (SARS-CoV) is proposed to be the cause of this syndrome on the basis of its association with human clinical cases (3,4) and reproduction of pulmonary lesions in experimentally challenged cynomolgus macaque monkeys (Macaca fascicularis) (5). Furthermore, some of the first persons identified with SARS-CoV infections were vendors in animal markets of southern China, which suggests a possible animal source (6). SARS-CoV has been detected by real-time RT-PCR or isolated from two wild mammalian species, Himalayan palm civet (Paguma larvata) and raccoon dog (Nytereutes procyonoides), in a market in southern China (7), but other studies in southern China involving six provinces and Beijing, as well as sampling of 54 wild and 11 domestic animal species, did not find SARS-CoV (8). The original source of this virus remains unknown (3). The susceptibility of different animal species within the animal meat markets is unknown.

Domesticated poultry species are major commodities traded in the animal markets of southern China. Poultry have been shown to be reservoirs for H5N1 and H9N2 avian influenza viruses that have crossed over and caused infections in humans from 1997 to 2003, some with fatal outcomes (12–14). Therefore, poultry should be examined as potential hosts for infection and amplification of SARS-CoV to determine any potential role they may have played during the emergence of human infections in southern China.

To determine if SARS-CoV could grow in avian embryos, 9-day-old chicken eggs and 13-day-old turkey embryonating eggs were inoculated by allantoic sac route and 17-day embryonating turkey eggs were inoculated by yolk sac route; all were tested by virus isolation and real-time RT-PCR for SARS-CoV. All laboratory procedures and animal studies were conducted in biosafety level 3 agriculture (BSL-3AG) (15) facility with HEPA respiratory protection and barrier clothing procedures for personnel. General care was provided in accordance with the Institutional Animal Care and Use Committee. 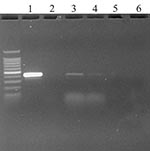 To establish the comparative sensitivity of virus isolation and real-time RT-PCR tests, serial dilutions of SARS-CoV propagated in E6 Vero cell culture were tested for virus reisolation in E6 Vero cells and detection of replicase ORF 1b gene by real-time RT-PCR (16). Virus isolation was slightly more sensitive, detecting virus in two of three replicates at the 10-7 dilution; the real-time RT-PCR test detected SARS-CoV in three of three replicates at 10-5 to 10-6 dilution, depending on primer sets. The real-time RT-PCR assay detected virus in oropharyngeal swab specimens from two chickens on day 1 PI (Figure). Real-time RT-PCR results were confirmed by standard RT-PCR targeting the same gene (primers: SARS clone1b For 5′- TgACAgAgCCATgCCT-3′, SARS clone1b Rev 5’CAACggCATCATCAgA-3′) and sequencing of the amplified product. No infectious virus was isolated from any of the birds at any time from oropharyngeal or cloacal swab specimens, plasma, or tissues. Histologic examination did not identify any specific lesions. No anti–SARS-CoV–specific antibodies were detected in birds at 0 or 10 days after injection. Levels of SARS-CoV were detected corresponding to the inoculated titers in chicken and turkey embryonating eggs by real-time RT-PCR, but not by virus isolation.

These findings suggest that poultry were unlikely to have been infected during the recent SARS-CoV outbreak and were unlikely to have played any role as amplifiers in the animal markets of southern China. The low level of virus detected by real-time RT-PCR from the chickens and the failure to isolate virus from embryonating chicken and turkey eggs suggest that the detected virus was residual inoculum or nonviable virus and that substantial virus replication in the poultry was unlikely. In addition, this SARS-CoV was of low tissue culture passage, i.e., third passage in Vero E6 cell, which minimized the potential for increased cell culture adaptation and concomitant decrease in vivo replication. Using the original or second tissue culture passage would unlikely have resulted in substantial replication in poultry. However, the virus used in these experiments, the Urbani SARS-CoV, had a 29-nt deletion in the genome. Whether the GZ01 human virus or those from civet cats and raccoon dog containing the extra 29 nt would infect and amplify in poultry would be of interest for future research.

Dr. Swayne is a veterinary pathologist and the director of the Southeast Poultry Research Laboratory of the Agricultural Research Service, U.S. Department of Agriculture. His research focuses on pathobiology and control of exotic and emerging viral diseases of poultry and other birds, principally highly pathogenic avian influenza, avian metapneumovirus, and West Nile virus.

Funding for this study was provided by the U.S. Department of Agriculture, Agricultural Research Service CRIS project #6612-32000-039.