To the Editor: Becker et al. recently reported the probable implication of Kytococcus schroeteri in a case of acute prosthetic valve endocarditis, on the basis of its recovery from blood cultures drawn at the time of infection (1). K. schroeteri was only characterized on that occasion and is a new micrococcal species resistant to penicillins (2). Here, we report the isolation of this organism from prosthetic valve vegetations in a patient who had undergone aortic valve replacement 3 years earlier. The 73-year-old man was admitted with fever (38.8°C) and shortness of breath, which had both increased gradually over the previous 2 months. He had no recent history of intravenous drug administration or catheterization. Laboratory findings showed a leukocyte count of 12 x 109/L (90% neutrophils) and a raised C-reactive protein level. Transesophageal echocardiogram revealed several small vegetations on the Carpentier-Edwards aortic bioprosthesis and a voluminous perivalvular abscess. Four sets of blood cultures were drawn before antimicrobial therapy was inititiated.

Intravenous vancomycin (2 g twice a day) and gentamicin (240 mg/d) were started empirically. The prosthetic material was replaced promptly and the abscess was debrided extensively. Vegetations from the resected material showed numerous polymorphonuclear neutrophils and gram-positive cocci on microscopic examination. Oral rifampicin (600 mg twice a day) was added to the initial regimen.

The postoperative course was uneventful except for cutaneous intolerance to vancomycin, which was replaced with teicoplanin. The physical condition of the patient improved steadily. Gentamicin and rifampicin were discontinued after 3 weeks. Eight months after completion of the 6-week treatment, the patient had no clinical or biologic evidence of infection, although moderate aortic incompetence persisted.

All blood cultures drawn on admission grew gram-positive cocci after 72 hours and subcultures on Trypticase soy agar yielded convex, muddy–yellow colonies of heterogeneous sizes. The vegetations, pus samples of the abscess, and prosthetic valve cultures grew the same type of colonies. All isolates displayed identical biotype and antimicrobial susceptibility and were considered as a single strain. The causative organism (designated ROG140) was initially identified as Micrococcus sp. based on the morphologic features, resistance to nitrofurantoin, and inability to grow anaerobically. Assignment to the genus Kytococcus was suggested by the arginine dihydrolase activity and resistance to oxacillin, 2 characteristics that are not shared by other micrococci (3). 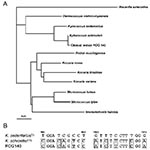 Figure. (A) Phylogenetic tree showing relationships among 16S rDNA sequences of clinical isolate ROG140 and type strains of members of the former Micrococcus genus. Nocardia asteroides was included as an out-group organism....

The definitive K. schroeteri identification was provided by analysis of the fatty acid content, which was similar to that of the type strain (2), and sequencing of the 16S rRNA genes. We sequenced a 1,012-bp fragment encompassing the first two thirds of the 16S rDNA of ROG140 (accession no. AY692224). The sequence was compared with type strains of all members of the former genus Micrococcus, and a phylogenetic tree was deduced by the neighbor–joining method (Figure). The sequences of ROG140 and the K. schroeteri type strain only differ by an A-to-G substitution at position 747 (E. coli numbering). Among the 21 nucleotide differences between the sequences of K. schroeteri and the closely related species K. sedentarius, 10 are located on a 30-base stretch and constitute a convenient K. schroeteri signature (Figure)

The natural habitat of K. schroeteri remains unknown. The only isolates of K. schroeteri identified so far originated from blood or cardiac material, although Kytococcus literally means “a coccus from the skin.” Our attempts to recover K. schroeteri from the mouth, nose, or skin of our patient were unsuccessful. In a recent study, Szczerba et al. were able to isolate most micrococcal species, including K. sedentarius but not K. schroeteri, from human skin and mucosa (5). However, at that time the authors may not have been aware of this newly described species. The mode of contamination also remains unclear. In the original description (1), K. schroeteri endocarditis had developed in the patient <3 months after she underwent cardiac surgery, which suggested perioperative contamination. Here, we describe a late onset, subacute infection 3 years after surgery, which is more likely to have been caused by hematogenous spread.

Although Micrococcus-like organisms cause endocarditis infrequently (6), the description of 2 independent infections due to a new species in a short period is intriguing and suggests a specific pathogenicity, at least on prosthetic heart devices. By demonstrating the presence of the bacteria in the infected site, this report establishes K. schroeteri as a genuine pathogen in this clinical setting and should prompt further investigations to identify its natural habitat and virulence determinants. At present, commercial systems are not able to identify K. schroeteri. However, gram-positive cocci that are strictly aerobic, oxacillin-resistant, and arginine dihydrolase-positive should be recognized as potential Kytococcus species and taken into account when endocarditis is suspected.

Page created: April 15, 2011
Page updated: April 15, 2011
Page reviewed: April 15, 2011
The conclusions, findings, and opinions expressed by authors contributing to this journal do not necessarily reflect the official position of the U.S. Department of Health and Human Services, the Public Health Service, the Centers for Disease Control and Prevention, or the authors' affiliated institutions. Use of trade names is for identification only and does not imply endorsement by any of the groups named above.