In this report, we present the first documentation of Japanese spotted fever in South Korea and isolation of R. japonica. To our knowledge, this is the first report of an SFG rickettsia isolated from a patient in South Korea. 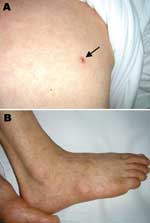 Figure 1. Skin findings of the patient. A small eschar (arrow) on the chest with erythematous rash (A) and petechiae (B) were observed.

A 65-year-old farmer was admitted to a hospital in Incheon, South Korea, on July 9, 2004; he had experienced fever, back pain, and myalgia for 5 days before admission. He lived in Mueui Island, ≈20 km east of Incheon. On physical examination, he had fever of 38.6°C, cervical and axillary lymphadenopathies, and a maculopapular rash. An eschar, which was smaller and more shallow than those of scrub typhus, was noticed on the chest wall (Figure 1). Laboratory studies showed a hemoglobin level of 7.7 mmol/L, a leukocyte count of 8 × 109/L, and a platelet count of 87 × 109/L. The patient was treated with oral doxycycline (200 mg/day), but the fever persisted during the treatment. On the third hospital day, petechiae developed on the trunk and extremities, including palms and soles (Figure 1). The leukocyte count increased to 11.2 × 109/L, and the platelet count decreased further to 32 × 109/L. He also showed confusion, irritability, and radiographic evidence of interstitial pneumonitis. The patient was then given azithromycin (500 mg/day intravenously) instead of oral doxycycline because of the possibility that he was infected with doxycycline-resistant O. tsutsugamushi. His fever resolved during next 5 days and he was discharged.

The serum samples were tested for antibody against O. tsutsugamushi (Boryong), R. typhi (Wilmington), and the isolated strain (Inha1) by using the indirect fluorescent-antibody (IFA) test. The serum specimen taken on the day of admission was negative for antibodies against all Rickettsia spp. by the IFA test. The serum sample taken after 18 days was sent to the national reference laboratory (Division of Rickettsial Diseases, Department of Bacteriology, National Institute of Health, Seoul, Republic of Korea) and was reported to be positive against R. japonica with a titer of 1,024. The convalescent-phase serum sample, taken on the 30th day after admission, was positive for antibodies against the isolated strain (Inha1) with a titer of 5,120.

To isolate the pathogen, a few drops of blood taken on the day of admission were added directly to the monolayer cultures of ECV304 cells, a spontaneously transformed cell line derived from human umbilical vein endothelial cells (obtained from S.Y. Kim) (7). After incubation for 24 h, monolayers of ECV304 were maintained in M199 medium containing 10% fetal calf serum and observed daily with an inverted microscope. The infected cells exhibited few cytopathologic changes, displaying only a few rounded cells. On day 28, IFA staining was done by using the convalescent-phase serum of the patient to visualize the rickettsiae. Many intracellular bacteria were observed inside the cells; they were not seen in the staining with control serum. From these results, we tentatively identified our isolated bacterium (strain Inha1), as a member of SFG rickettsiae.

To identify the isolate at species level, we determined the sequence of five genes that have been used for the phylogenetic classification of rickettsiae (9–14). The sequences are identical or highly homologous to those of R. japonica. Although the sequence similarity of the gltA gene of Inha1 strain to R. japonica YH was 99.8%, the other 4 genes show sufficient similarity to fulfill the criteria suggested by Fournier et al. (9).

Dr Chung is a member of the Korean Society of Infectious Diseases. His primary research interests are infections by intracellular organisms, especially Rickettsia and Plasmodium falciparum.

This work was supported by a grant from Korea Center for Disease Control and Prevention in 2005.